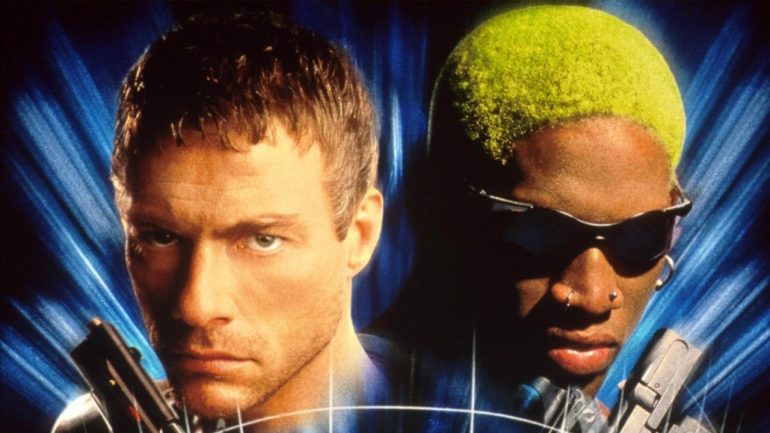 Today marks the 20th anniversary of Double Team which has international spy Jean-Claude Van Damme teaming with a flamboyant weapons dealer Dennis Rodman to escape from a penal colony and save his family.

Let’s face it, Double Team isn’t one of Jean-Claude Van Damme’s better movies; it’s pure cheese with Dennis Rodman and JCVD playing arguably the most bizarre on-screen duo I’ve seen in a long time and yet… I still kind of enjoy it for what it is. It has one of the best training montages of all time with JCVD lifting a bath filled with water. I tried that once but my landlord was pissed at the mess it left.

I always liked the plot and enjoyed how it was kind of a modern update of The Prisoner; it was also awesome to see the underrated Paul Freeman in a major role. I was always surprised he didn’t do more movies as he was fantastic in Raiders of the Lost Ark as Belloch.

Double Team also has the added bonus of Mickey Rourke’s villain Stavros who at one point gets to walk away from an explosion in slow motion. You also kind of don’t hate him as JCVD’s character Jack Quinn accidentally kills Stavros’ son so you can understand his motivation.

According to IMDB Sammo Hung was brought in as Special Action Choreographer to help with the fight scenes which is why they are pretty well done and Tsui Hark is no slouch either.

Apparently it also featured some of the biggest tiger related stunts put on film; I gotta say it was always cool to see a real tiger rather than it being CG which made the finale pretty impressive. Let’s not forget Stavros’ epic death scene which you can watch below.

This was during JCVD’s “dark period” when he was reaching the end of having his movies released in theatres so I was “lucky” enough to see this on the big screen when it came out.

I think the worst element is the script… and frankly Dennis Rodman who had no place in a movie like this. Hell, what if it had been Seagal or Mark Dacascos instead? Then this could have been something special.

So here we are, 20 years later. Do you like Double Team or should it be cast into the fiery chasm from whence it came?