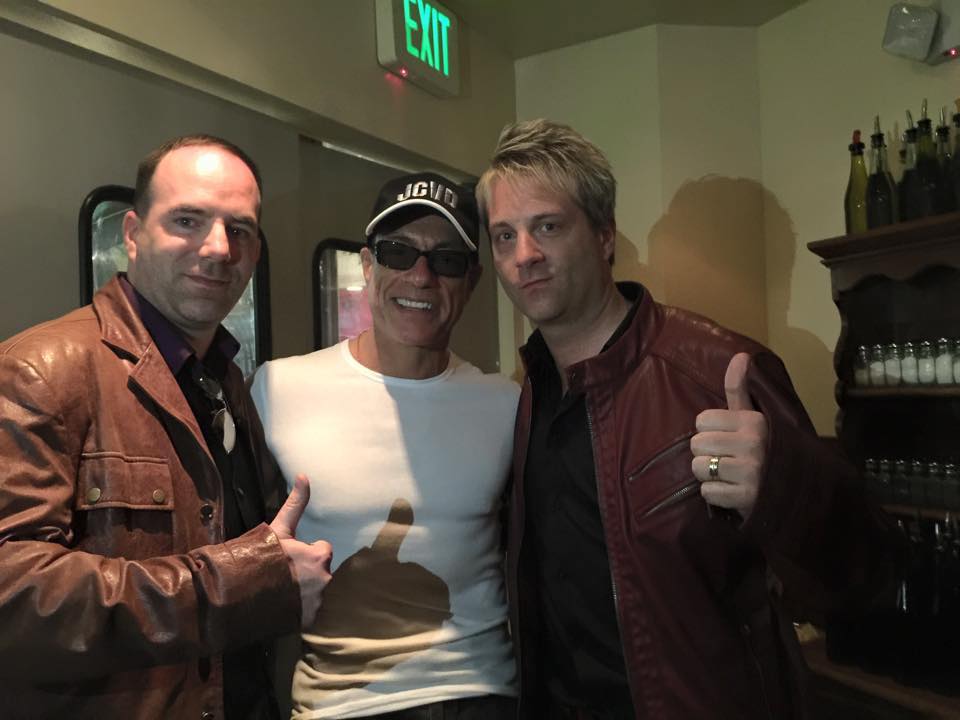 So 2015 is winding down and before we begin 2016 I thought I would take a look back at the past year’s highs and lows.

I got to achieve a lifelong dream this year, one that I never thought I would see. I was kindly invited to Los Angeles by director Ernie Barbarash for the world premiere of Pound of Flesh starring Jean-Claude Van Damme.

I thought this sounded like a lot of fun and you never know, maybe the man himself might show up. I was joined by my brother Greg who flew all the way from Scotland and I met him in our apartment in LA.

The night we arrived we didn’t waste any time and were invited to the premiere of Skin Trade by our friend Duvien Ho from Dammaged Goods.

We sat there with Tony Jaa, Dolph Lundgren, Ron Perlman and Jason Statham and it was like something out of a dream. Dolph gave a little speech about the awfulness of human trafficking before the movie began. I sat next to Sheldon Lettich who directed Lionheart and Double Impact so it ended up being a very special night for me. A big thanks to Duvien for making it happen.

The evening of Pound of Flesh, while waiting to go into the movie we bumped into Apollo Creed himself Carl Weathers who was as cool as you’d expect and I even got a photo with him. But that was only the start of the evening; JCVD showed up on the red carpet and sat in theatre while the movie played.

The after party took place in a restaurant across the road from the theatre and despite being packed to the brims, me and Greg got inside and were introduced to Van Damme by Ernie. We got to chat to him for about 10 minutes and have a few photos done too. People say you should never meet your heroes as they usually end up disappointing but JCVD exceeded all expectations and took the time to chat with us about this site and the movie.

I was high for about 3 months after that night but that was only the cherry to top off a fantastic trip. I got to make some new friends including Duvien and author david j. moore who is now a contributor to the site.

In terms of the movies from 2015, there were some great and not so great actioners. My favourites included Bone Tomahawk, SPECTRE, Mad Max, Creed, Star Wars: The Force Awakens, Redeemer and SPL 2 to name just a few. My top movies of the year list will be coming in the next few days.

Arnold Schwarzenegger returned in Terminator Genisys but nobody really cared and it may be the last we see of the franchise… until the next reboot.

Stallone’s return as Rocky Balboa in Creed was a huge surprise and was arguably my favourite movie of the year; he may even get an Oscar nomination which I would love to see.

I found Avengers: Age of Ultron to be one of the most disappointing movies of the year; I’d been looking forward to it from the trailers as it promised to be a little darker but it ended up being just another disposable blockbuster. I preferred Ant-Man which was a lot of fun but even then not all that amazing. Other poor movies included Transporter Refueled, Agent 47 and the uninspired reboot of Fantastic Four.

Next year we have Batman v Superman, Suicide Squad, Deadpool, Undisputed IV, Kickboxer: Vengeance, Hard Target 2, Headshot, Beyond Skyline and many more so with any luck they will not disappoint.

The Action Elite will (hopefully) have a new look in the new year too so you can expect a better looking site with some cool new features.

As always I would like to thank Alex Hush for all the hard work he has put into the site and for arranging some amazing interviews throughout the year. I’d also like to thank my brother Greg, my family and all the contributors to the site for all their support this past year. But most of all thanks to all the fans of The Action Elite who have helped to keep it going.

I wish you all an Explosively Awesome New Year.