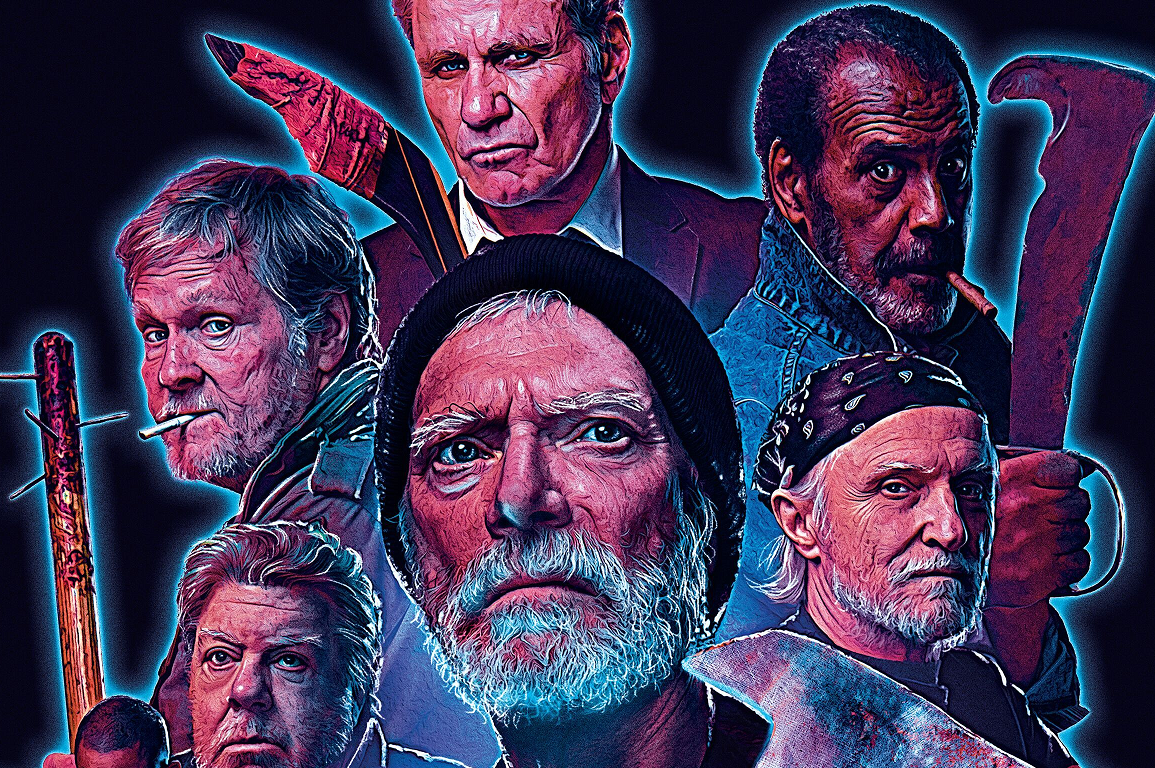 Well… that sucked, didn’t it?

Now that we are nearly rid of this godforsaken year, we can go into the new year with maybe a bit of optimism and yet I fear it will be a while before things are “normal” again.

There haven’t really been many theatrical releases this year and streaming became king but Christopher Nolan’s Tenet was the first major Summer release and although it still managed to make around $360 million worldwide it was seen as a disappointment. I enjoyed it because it was my first time ever at a Drive-in which was an experience that has made a big comeback this year. Although it doesn’t match the sound quality of being in the theatre it’s still a great time and managed to help keep us sane.

Many of us worried about the future of the theatrical experience but I think it will return; it may end up being later in 2021 or maybe even 2022 but we just have to be patient as this too shall pass as they say.

Warner Bros. are still taking flack from filmmakers after their decision to release their 2021 content in theatres and HBO Max at the same time with the first up being Wonder Woman 1984 which was released last week and was met with middling reviews. Next year will see the release of Zack Snyder’s director’s cut of Justice League as well as Godzilla vs. Kong and many more so at least there will be some new content coming.

Disney released the live action version of Mulan direct to Disney+ and got generally average reviews from most; I enjoyed it as I had never seen the original and it had the added bonus of Donnie Yen in it. Donnie would also star in Enter the Fat Dragon but it wasn’t very good so let’s move on.

We got another Ip Man movie but there was no Donnie Yen in sight; this time it was Dennis To returning to the role for the third time and it was entertaining for what it was.

The Gentlemen came out 12 years ago in January and had a scene stealing performance from Hugh Grant with the usual sharp Guy Ritchie wit.

Scott Adkins had a good year with 5 movies – Max Cloud, Legacy of Lies, Seized, Dead Reckoning and Debt Collectors. Of the movies I thought Debt Collectors was the best as it had some good humour and plenty of action. Scott also managed to film Castle Falls which is directed by Dolph Lundgren and may be out next year but could well be 2022 considering everything that’s going on.

Aside from Debt Collectors Jesse Johnson also gave us the brutally awesome The Mercenary which is one of my favourites of the year.

Sadly it was quiet on the action legends front with nothing released by Arnold, JCVD, Sylvester Stallone or Dolph Lundgren so hopefully next year we can finally see Stallone’s Samaritan and Dolph’s Castle Falls. Van Damme is also working on The Last Mercenary for Netflix so I look forward to seeing that.

Mark Dacascos starred in One Night in Bangkok with a small role from Kane Kosugi (who really needs to be in more high profile action movies) from director Wych Kaosayananda. It was sort of like Collateral and was more of a character piece than all out action flick but it had enough action in it to entertain.

Mel Gibson starred in the average Forces of Nature but he created a new Christmas gem with Fatman which I will watch regularly in future years.

Jackie Chan was back in Vanguard which wasn’t one of his better efforts but the addition of Brahim to the cast was a big plus point.

The Outpost with Scott Eastwood was one of my favourites of the year as well as Becky which was a crazy good time; that feels like eons ago when I watched those two movies…

Netflix got us through this year with solid releases like Extraction starring Chris Hemsworth which proved highly successful as well as Project Power, Spenser Confidential, The Last Days of American Crime, Lost Bullet, The Old Guard with Charlize Theron and Rogue City.

Vinnie Jones had one of his best years as not only did he star in I Am Vengeance: Retaliation but he had arguably his most memorable role yet in The Big Ugly which was a surprisingly strong action thriller.

Speaking of Brit action flicks, Tribal: Get Out Alive gave us a new female badass on the block with Zara Phythian and was a lot of fun.

Tony Jaa starred in the bonkers Jiu Jitsu with Alain Moussi, Frank Grillo and Nicolas Cage; he also starred in the videogame Monster Hunter with Milla Jovovich which I will need to watch as soon as I can but our theatres are still closed so we will have to wait until it hits digital.

Speaking of Frank Grillo, this year I finally caught up on Kingdom which is one of the best television series of recent times; it was released a few years ago but I only saw it for the first time this year so check it out if you haven’t.

There weren’t many superhero movies and frankly it’s been nice to get a break but we did get the disappointing Wonder Woman 1984, The bizarre New Mutants and Birds of Prey (which also came out just before the pandemic) which I admittedly enjoyed more than I was expecting to.

Bruce Willis starred in the usual straight to DVD fare like Survive the Night and Hard Kill but I did enjoy the Die Hard is Back commercial he did which was just for batteries but it was as close to “old Bruce” as we’re likely to get although Breach AKA Anti-Life felt like a near return to form for him.

Chad Michael Collins was back as Brandon Beckett in Sniper: Assassin’s End which could take the franchise in a whole new direction.

Ryan Phillipe and Casper Van Dien starred in the surprisingly awesome throwback actioner The 2nd which felt like something from the good old days of the genre.

Michael Jai White starred in (the not that great) Welcome to Sudden Death but he did the best he could with it and I still love watching him on screen.

Luke Goss returned with Val Kilmer in Christian Sesma’s Paydirt which I have yet to see.

Will Smith and Martin Lawrence returned with Bad Boys for Life which I believe was the last film I saw in the theatre; it may be my favourite of the trilogy as it had a good story, lots of action and a genuinely fun script.

Vin Diesel’s Bloodshot was a major casualty of the pandemic and came out literally a week or so before the world came to a halt. It went straight to streaming and although it wasn’t an amazing movie it was enjoyable enough for what it was.

Other releases included Underwater with Kristin Stewart, Honest Thief with Liam Neeson, The Hunt, Archenemy, The Tax Collector, The Doorman, Rogue, Deep Blue Sea 3 and Ava (which was regarded as one of the year’s worst but I didn’t mind it).

At the end of the year we had Skylines which was the third part of Liam O’Donnell’s Skyline trilogy which I also still need to see but I’ve heard it’s excellent.

Russell Crowe starred in one of my favourites with Unhinged which was a scathing indictment of modern society but was also incredibly intense and violent.

Thinking back I don’t know if I even have a best or worst of film for this year but I really enjoyed Unhinged, The Mercenary, Bad Boys for Life, The 2nd, I am Vengeance: Retaliation, The Gentlemen, VFW, Becky, The Outpost and Debt Collectors.

I’ve watched several TV shows like season 2 of The Boys which delivered the expected madness we’ve come to adore from it; we also got season 2 of Warrior which I’m half way through and will review it soon. It’s too bad we won’t get season 3 but these are the times we live in.

Gangs of London wowed a lot of fight fans with its violence and characters and is another series I need to catch up on… I’m really dropping the ball here.

There is nothing that will top The Mandalorian for me as it consistently delivered everything I’ve wanted from it as a Star Wars fan.

I got to interview some acting greats like Malcolm McDowell and Anne Heche which is something I never thought would happen. Chatting with Stu Bennett and Scott Adkins was also awesome. My brother getting the shout out from Chuck Norris (below) for me as an early Christmas present is one of the best gifts I’ve ever received.

Hopefully James Bond will return for No Time to Die in April but I have a feeling that may end up either on streaming or being moved again.

Speaking of James Bond we lost a few greats this year including Sir Sean Connery and Honor Blackman as well as Chadwick Boseman, Kirk Douglas, Max von Sydow, Irrfan Khan, Fred Willard and many more. May they all rest in peace.

So that was 2020; I’m sure I’ve forgotten a bunch of stuff and there are several movies and TV shows I need to catch up on but yeah… what a shitty year. Thank you for all the support to the fans and contributors of The Action Elite – I hope you all stay safe and healthy and have an amazing 2021.