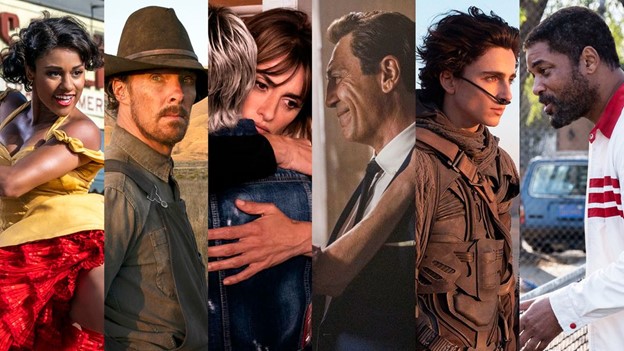 2021 was another strange year for film, and 2022 is left to figure out where to go next. The world is forcing a change back to normal after the COVID-19 variants kept moviegoers away from theaters. This does mark a big change from how 2020 felt like a year without movies, but it still marks a divide in the film industry. Many consumers still avoid the theater and choose to wait for streaming services to get the latest films. Many directors and actors, however, have strong words about companies that release movies straight to streaming. With so much up in the air about the future of the theater experience, we look at awards nominees that were released in a mix of different ways.

Many moviegoers were still hesitant to actually go to the theater in 2021, as it felt like most major movie releases were met with Covid deciding to release another variant. Some who were eager to brave the pandemic to get to theaters again simply couldn’t, as their small town theater remained closed or just didn’t get the big movies.

Overall it was still better than 2020, where all the movies that weren’t delayed were forced to release on streaming platforms like HBO Max and Disney+. But streaming still remained a force in 2021, with critical darling The Power of the Dog releasing as a Netflix film. Drive My Car, the first Japanese film to be nominated for a Best Picture Oscar, is seeing a very limited run in theaters before hitting HBO Max.

There is something to be said for the likes of Shang Chi and Spider-Man: No Way Home. Marvel seems to be the only studio that can consistently get butts back in seats. No Way Home in particular managed to beat out Avatar to become the third highest-grossing movie in the US. This marks the first movie to make that level of revenue since Covid began. Fans took note, and there was a big push for No Way Home to get an Oscar nod for its contribution to the industry. While that failed, the Oscars did add a fan-vote category that’s currently running.

The fan vote is controversial, feeling like a cheap olive branch to some and an insult to the meaning of the awards to others. Yet it does mark a clear intention by the Oscar committee to keep blockbusters separate from the dramatic thinkpieces.

Belfast was the name on a lot of lips at the end of 2021, and the new year doesn’t seem to have changed that. The Power of the Dog remains a contender, however.

The visual Tour de Force that was Dune has a good chance to secure Denis Villeneuve some kind of award in 2022, and the director seems like a good fit. Ryusuke Hamaguchi also will likely get some praise for Drive My Car. Many are saying that the Japanese film could “pull a Parasite” and get Best Picture. But Best Screenplay is a more likely event for Drive My Car.

Benedict Cumberbatch put in a strong performance in Power of the Dog, although Will Smith was equally moving for his work in King Richard. Alana Haim’s turn in Licorice Pizza is sure to get some recognition.

One fascinating thing about film awards this year–Oscars, Cannes, NYFF all of them–is that legal betting might be allowed. Canadian betting sites might allow bets on politics and awards like they do sports, meaning Oscars predictions could be worth money. New York sports betting apps don’t yet allow this, but sports wagering already brought in over a billion dollars in the first month of 2022. It wouldn’t be surprising to see New York adopt Oscars betting in future years just to up the profits further.