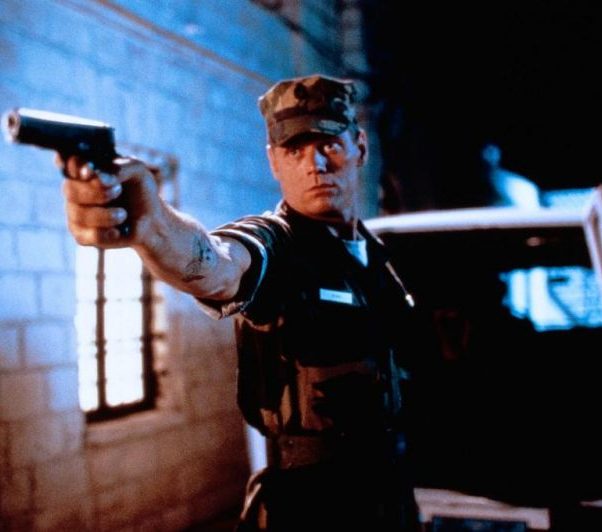 30 Years of Death Before Dishonor

It was February 20th 1987 when Death Before Dishonor was released and after giving it a watch recently I’m happy to say that the movie still holds up well.

The surprising thing is that the story is still relevant and the movie feels like it was a major influence behind The Marine franchise.

There actually isn’t anything especially unbelievable in the movie as the story could still work today; it’s set in the fictitious country of Jemal (basically Lebanon) with American marines helping arm Jemali soldiers against radicals with (of course) things going very wrong with an American Colonel being kidnapped. It’s up to our hero Gunnery Sgt. Burns (Fred Dryer) to rescue him but this movie doesn’t quite go the way you may expect.

This has been described as a one man army movie except… at no point does our hero Burns become a one man army. He does team up with 2 other marines and some Mossad agents to take down the villains at the end but he does it as part of a group so this isn’t exactly Rambo.

I really liked the character of Burns as he feels believable and Fred Dryer was perfectly cast; he looks like a Marine and there are several initiation scenes with new recruits which feel very authentic.

It’s not the most action-packed movie you’ll ever see with quite a slow first half but I enjoyed the build up to the explosive finale.

Paul Winfield, as the American Ambassador to Jemal spends the movie trying to cover his ass while trying to avoid an international incident and at first when I was younger I thought he didn’t feel realistic but in reality there are probably plenty of people who would behave like he did. I liked when he is in shock after the embassy is blown up and the reality of what is going on hits home with him.

In true Hollywood style they get an American actor (Rockne Tarkington) to play the “Arab” villain Abu Jihad who is unsurprisingly pretty one note.

Keep your eyes open for a young Sasha Mitchell (Kickboxer sequels) who plays one of the marines; he looks about 12 in the movie but it’s still cool to him.

It also has one of the most brutal torture scenes which still disturbs today with the Colonel getting a power drill through the hand; the camera doesn’t cut away and it makes me wince every time.

The movie has a few patriotic moments which some reviews have described as “jingoistic”. How dare they! I’ve always love those types of scenes however, I was reading that one has been removed in some DVD versions. After the final battle where the Marines took Ramirez’s flag and taped it to the jeep antenna the flag slowly rises up as they play the Marine Corp anthem in the background. I’ve never seen that version and the only ending I know is the one with Burns smiling at the other Marine but I now feel I have to track it down.

After 30 years Death before Dishonor is still an entertaining movie with a few uncomfortable moments but definitely worth tracking down.