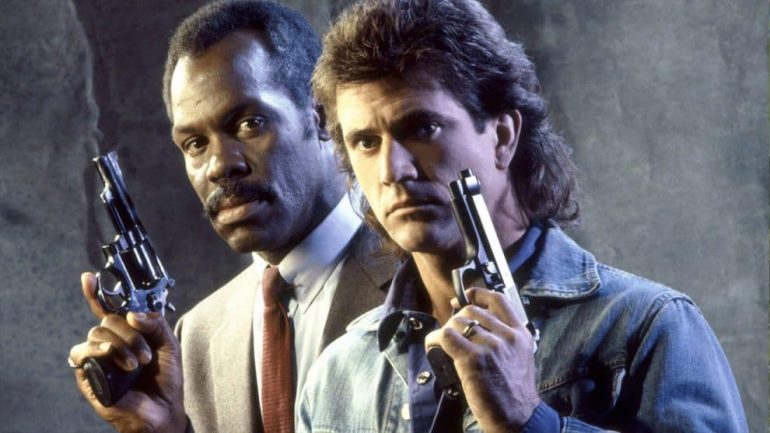 Today marks the 30th anniversary of the release of the classic buddy cop movie Lethal Weapon. It’s arguably still the greatest buddy movie of them all and was incredibly influential. Even the recent reboot has proven surprisingly successful on TV but we’re not here to talk about that; this is all about the original (and my personal favourite) Lethal Weapon movie.

Rather than reviewing the movie I thought I’d hunt down some interesting bits of trivia about the movie.

There’s a great piece on IMDB about how writer Shane Black had a very different version of the first draft of the script which he apparently wrote sometime in 1985.

This first draft was 141 pages long and it was much darker, it had alternate plot parts, character scenes, action sequences and many other differences, like the entire ending which had big chase scene including a police helicopter which gets blown up by Joshua who fires a napalm missile at it causing it to crash into the Hollywood sign and start a huge fire. That I would have loved to see!

Murtaugh also killed General McAllister while he was driving a a truck full of heroin and guns which then crashes and explodes over the Hollywood Hills causing for the heroin to start snowing over the burning Hollywood sign and this is arguably my favourite but Riggs apparently killed Joshua by stabbing his finger through his eye right into the brain.

Riggs was also a very different character in this first draft than he is in the movie, and lot more mentally unstable. For example, in the original version of the scene where he kills a sniper who is shooting at the kids, instead of using his gun Riggs uses a rocket launcher to blow up the sniper after he shot and killed several kids. The sniper scene is one of my favourite moments of the film and it still baffles me that it was removed from the theatrical release of the film.

In another part of the script he also uses ninja throwing stars to wound one of the villains and then tortures him for information.

Black at first thought that this draft didn’t work so he threw it in the garbage but later changed his mind and re-worked it into the new drafts. For the longest time, Black was the only one who had copy of his first draft until he sold it on auction, and eventually it was found by fans.

In the first draft of the script Riggs and Murtaugh both had flashbacks of their time in Vietnam, with Murtaugh at one point remembering how he accidentally killed a young soldier with his bare hands during intense military training even before he went to war, and Riggs remembering how great killing machine he was and how much people he killed working as an assassin for CIA, which is why US and VC soldiers considered him a legend. The script also had more of a backstory for Joshua, who just like Riggs was also working as CIA assassin in Vietnam and he too got a legendary status due to all the things he did in the war, which explains how did they knew of each other’s names and reputations in the film.

There was also an alternate opening which we’ve already seen and it featured Martin Riggs drinking alone in a bar where he is accosted by a couple of thugs who want his money. Riggs claims all of his is in the bank and tells the thugs “not to fuck with him.” The thugs attack him, but Riggs easily subdues them. He is then allowed to take a free bottle of booze from the bar in exchange for never returning. Director Richard Donner felt the movie should open with a brighter look at Riggs and filmed the scene with Riggs awakening in his trailer to replace it. The alternate ending featured Riggs and Murtaugh saying good-bye to one another. Murtaugh tells Riggs he’s thinking of retiring, but Riggs tells him not to.

A lot of the script was still changed to make it less dark and director Richard Donner brought on Jeffrey Boam to do some uncredited rewrites. He also rewrote Lethal Weapon 2 after it was rejected for being too dark and bloody and because Riggs died in the end. He then wrote the script for Lethal Weapon 3, and he also wrote an unused draft for fourth film which had Riggs and Murtaugh dealing with racist white trash right wing neo-Nazi survivalists doing a terrorist attack in L.A.

I really liked the idea of that story and it’s a shame it never materialized. I always thought the Lethal Weapon series was quite dark despite the humour, but I had no problem with it as it made it feel more believable.

Enter the Dragon star John Saxon was the first choice for the role of Joshua but due to him shooting A Nightmare on Elm Street 3: Dream Warriors, he was unavailable. He would have been a great choice actually but let’s face it there is no substitute for Busey.

Anyway, I’ve rambled on enough and there is a lot more trivia over at IMDB but for now, Happy Birthday Lethal Weapon. You’re still not too old for this shit.