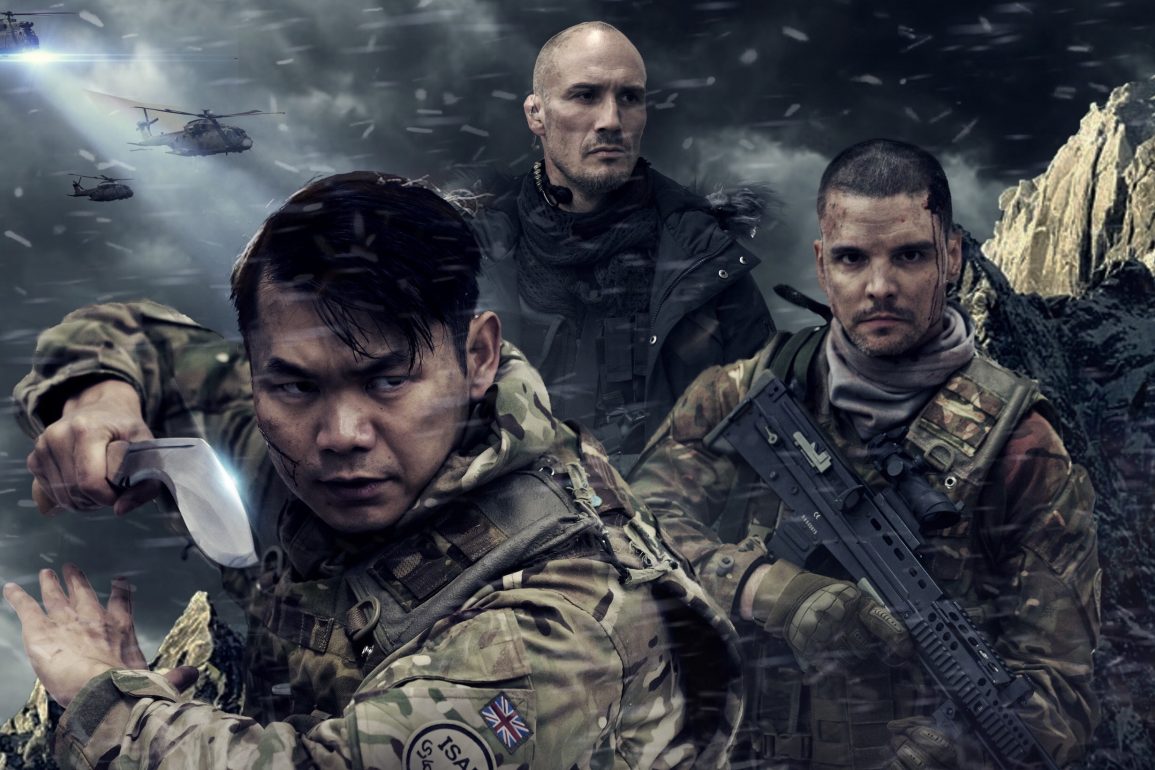 400 Bullets rises above mediocrity and delivers a decent Saturday night viewing for fans looking for this kind of subgenre.

Plot: One cold winter night in Afghanistan is about to get a whole lot worse for Rana Rae (Jean-Paul Ly), a Gurkha soldier left to guard a British military outpost, when Captain Noah Brandt (Andrew Lee Potts) arrives looking for refuge from a group of rogue special ops and a cell of heavily armed Taliban. The two soldiers must fight for their lives as they attempt to call for backup before the rogue squad, led by the backstabbing Sergeant Bartlett (James Warren), can hunt them down to retrieve a case of missile guidance chips that Noah intercepted. But Bartlett and his men do not count on Rana, whose ferocious Gurkha training makes him a force to be reckoned with. Rana and Noah, armed with only 400 bullets and the Gurkha’s deadly weapon of choice – the kukri blade – must battle their way through multiple enemies in a brutal showdown to the death in the film’s jaw-dropping finale.

Review: There’s no denying that rising action and martial arts Phenom Jean-Paul Ly is becoming one of those names that when you see his name attached to anything, you immediately get psyched for that particular project. Whether he’s in front of or behind the camera, you know that you’re going to get your money’s worth in the adrenaline department. Ly is one of those unique talents that elevates even a mediocre film with his jaw dropping fight choreography and his scenes are one that the rewind button was created for.

Ly’s latest action endeavor has him doing the military thing in director Tom Paton’s gritty, military actioner 400 Bullets. Paton has seen much indie success with his genre mashing films Black Site and Stairs for example which melds action, sci-fi and horror into a wild, cohesive ride for fans seeking out these kind of thrills. I was immediately drawn to this movie with the names of Ly and Paton involved and I was also intrigued because this was a straight up, military themed action pic with firepower and fisticuffs a plenty.

The plot has Ly starring as Rana Rae, who is a Gurkha soldier left behind to guard a remote British military outpost in the wastelands of Afghanistan. Ly is alone and has limited resources and on one faithful night, his routine, everyday existence is shattered.

Enter Captain Noah Brandt (Andrew Lee Potts) who is injured and having a really bad night as he has been double crossed by a unit of rogue special ops soldiers led by Sergeant Bartlett (James Warren). During a routine convoy to transport missiles and guidance chips, Bartlett and his crew turn on Brandt so they can steal the weaponry and make a huge payday for themselves. In the ensuing skirmish, Brandt escapes with the chips and makes it to the isolated outpost where Rae is held up.

What transpires is a battle of wills and skill as Rae and Brandt team up to take on Bartlett and his mercenaries in one night of bullets and hand to hand carnage. Unfortunately, between the two heroes, they only have 400 rounds of ammo (hence the title of the flick) so they’ll have to rely on everything else they have to survive the night until reinforcements arrive.

Lucky for Brandt, Rae is a lethal fighting machine who is armed with a pretty bad ass kukri blade as well as an extreme case of honor which propels him to help this man he just met and risk his life for what’s right.

400 Bullets is one of those indie action projects that I’ve been following since it’s production and I was finally able to see the finished product as Ly and Paton was an extreme selling point for me. Ly has been featured in films like Jailbreak and Nightshooters as well as the recent I am Vengeance: Retaliation but those films were ensemble pieces mostly with Ly sharing the action with other talented individuals. Here, besides Potts, it’s basically Ly’s show as he is the main character.

400 Bullets has a running time of 90 minutes which is a substantial plus as Paton never slows things down and the action is plentiful and gritty. From beginning to end, Ly and Potts are essentially Energizer Bunnies as they keep on going and going and the two men certainly get as good as they give which makes the drama even more tense.

Forget about deep characterization here because there’s no time for that but hey, sometimes you want to watch an action film where you don’t have to think. All you have to do is sit back and watch the bullets and fists and feet fly. You know that Rae and Brandt are good and that Bartlett and his team are bad. Enough said.

One of the biggest reasons why this film works through what flaws it has is our two central characters. Ly and Potts work off each other well and their chemistry is solid. As the chaos ensues, they have no trouble giving each other a hard time and there’s ample opportunity for banter between them which is welcome from the almost non-stop adrenaline. It’s also great to see Ly finally deliver lengthy lines and pretty much carry a film on his more than capable shoulders. He’s quiet and reserved but that’s just fine because it offsets when he goes into berserker mode during the fight sequences.

Aside from Ly and Potts, the only other standout is James Warren who plays Bartlett. His role is pretty much one dimensional though as he’s your standard traitor who is just as likely to kill his own men along with the good guys. With Bartlett, you know he’s no good and you’re waiting for the finale to see him get what’s coming to him. His character might not be complex but Warren has immense fun with it and delivers a worthy performance for a film like this.

The action set pieces here are plentiful but not epic. They are good to watch but there is a strong lacking in the WOW department especially during the firefights. The choreography is basic and you pretty much have the good guys firing at the bad guys and vice versa with CGI muzzle flashes. The film is loaded with it but nothing on that end is memorable.

Where the action excels is with Ly. He’s basically a human highlight reel and anytime he’s in a fight, it’s blistering and fierce. Paton gives Ly a few opportunities to shine throughout and that’s when the film is at its best. I simply just wanted more of that. Ly gets to tone the extreme factor of his moves here as he adapts a more close quarters battle vibe for the altercations. The moves are brutal and gritty and Ly does his best with what there is. His use of the blade is also welcomed and again I wanted to see way more of that. Paton does film the fight scenes cleanly allowing for his talent to showcase what he can do.

The finale is the best part as Rae and Brandt take on Bartlett and Warren does a fine job keeping up with Ly and even gets enough opportunity to put Ly on his back. It’s a thrilling altercation that only suffers in its short length. The brief altercation does pact a dramatic wallop and mostly from Ly as he falls down but manages to get back up.

The biggest case for the film is its strong underlying message that honor and bravery above all are enough to make a stand for what’s right. There is bad in this world but for every one dark soul, there’s 10 brave individuals who will make a last stand to defend their comrades, God and country. 400 Bullets is quick to represent this and this makes us care for the two leads more even if we don’t really know their back story.

OVERALL: Indie action cinema is hit or miss and I am one that understands that most of these productions have limited budgets and time to make the finished product. Paton does the best with what resources he has available and in the hands of a less skillful filmmaker, the result world have been subpar. He uses his stars to help elevate the film and his three main actors rise to the occasion. Yes there’s flaws but with the help of Ly and his jaw dropping moves, 400 Bullets rises above mediocrity and delivers a decent Saturday night viewing for fans looking for this kind of subgenre. With a bigger budget, I would like to see what both director and star could do and hopefully in the future, we’ll get to see that. 400 Bullets might not be as impactful as some other films like it but it still manages to deliver bone crunching thrills for its audience with a simple plot combined with non-stop heroics. Honestly, that’s all any action fan can ask for.