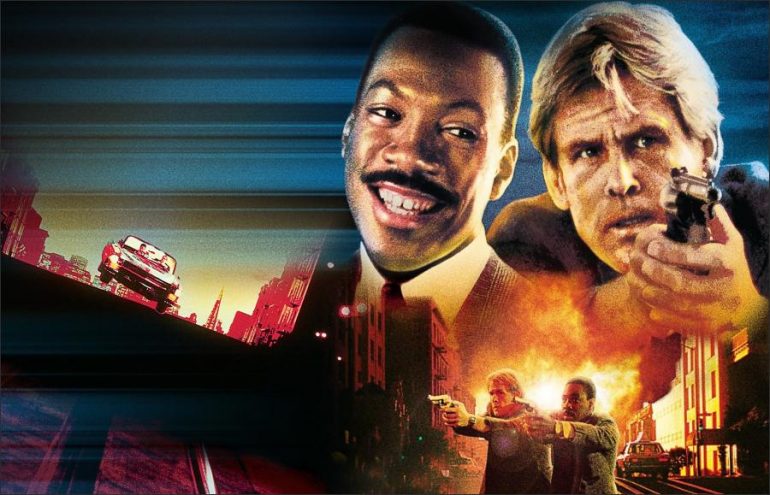 I hadn’t watched the 48 Hrs. movies for a few years so I thought rather than doing a typical review it would be more fun to do it as a Versus article. Can you guess which one will win?

Plot: Renegade cop Jack Cates (Nick Nolte) pulls bank robber Reggie Hammond (Eddie Murphy) from a federal prison on a 48-hour leave to help him capture Hammond’s old partner, Albert Ganz (James Remar). Having escaped from a prison work crew, Ganz is on a killing spree around San Francisco, on the trail of half a million dollars that went missing after one of his robberies. The cocky Reggie knows where the money is, but spars with the hotheaded Jack as he enjoys his temporary freedom.

Nick Nolte and Eddie Murphy star in this classic action buddy comedy which to this day may well be my personal favourite Eddie Murphy movie. He is more restrained than he would come to be keeping his shouting at a minimum which is why Reggie in this movie particularly is one of his best characters to date.

Nolte’s character Cates is the human equivalent of a bulldozer who just shouts, punches and shoots his way around town rarely coming across as particularly sympathetic; that’s what makes him feel more authentic as he and Reggie (Murphy) drive around trying to find crazed criminal Ganz (James Remar) and prevent him from taking money which Reggie stashed before he was put away.

The action is as slick as you’d expect from helmer Walter Hill with several shoot-outs and fights, but the highlight of the entire movie has to be when Reggie and Jack infiltrate a redneck bar forcing Reggie to improvise which is Murphy at his best.

Studio executives were allegedly concerned that the picture would be too violent to work as an effective comedy. I think they were right as I’ve never found 48 Hrs. to be that funny; it’s really more of a gritty cop movie with some humour and that’s just fine by me.

48 Hrs. is a who’s who of 80’s action cinema with Brion James, Sonny Landham, David Patrick Kelly and Jonathan Banks all making an appearance, but it was only on my most recent viewing (it had been a few years since I last watched it) that I noticed Denise Crosby (Tasha Yar from Star Tek: The Next Generation) in a small role as a hooker who hits Reggie with a baseball bat.

The great Frank McRae is at his shouty best in this movie and was arguably the template for the angry police captain which was a staple of 80’s action cinema.

James Remar really got into his character Ganz as he apparently often went without any sleep before shooting his scenes in order to give himself a more washed-out, psychotic look. It really works as Gans is a wonderfully crazed antagonist who really gets off on killing people. Sonny Landham also shines as his accomplice Bear but I always felt a little bad for David Patrick Kelly as Luther who was in an impossible situation as he just wanted his girlfriend back.

Director Walter Hill is at his absolute best here with perfect choices of music while also giving the action a neon infused glow for the finale.

James Horner is on scoring duties and it’s practically the same score he would create for Commando with the strange choice of calypso-esque music; for some reason it all works though only adding to the entertainment factor.

Overall, 48 Hrs. remains one of the all-time great buddy movies; it may not be that hilarious but the banter between Murphy and Nolte feels real (a lot of it was improvised) and the action is gritty and slick making it still stand up as a classic of the genre.

Plot: Times may change…but these guys don’t! Eddie Murphy (Shrek, Dr. Doolittle) and Nick Nolte (Hotel Rwanda, Cape Fear) are back on the streets in this smash sequel. Ex-con Reggie Hammond (Murphy) has just been released from prison, and he’s having his worst day ever…he’s got no money, his beloved Porsche was blown to bits and someone wants him dead. Hard-nosed cop Jack Cates (Nolte) isn’t having any better luck…he’s accused of manslaughter in a drug bust gone wrong, and may lose his badge. Fate has pushed these unlikely partners back together…one to fight for his job, and the other for his life. It’s another car-chasing, fist-flying, shoot-’em-up 48 hours in the city streets of San Francisco. And once again, Murphy and Nolte are in rare form as they team up to take the bad guys down!

Another 48 Hrs. came 8 years after the original reuniting Murphy and Nolte and was generally met with poor reviews sitting at 21% on Rotten Tomatoes. Personally, I’ve always enjoyed it and have never thought it was that bad at all. There is plenty of action which as impressive as ever, a high bodycount and some awesome stunts.

It isn’t as gritty as the first movie and I found Reggie was more like Axel Foley this time around generally being loud but he still provides some laughs and he and Nolte punching each other throughout is in keeping with the tone of the first film.

Andrew Divoff is wonderfully nuts as Ganz’s brother Richard ‘Cherry’ Ganz seeking revenge on Reggie and Cates for killing him in the last movie. Cates is on the trail of a mysterious criminal known as The Iceman who always seems to be one step ahead of them.

I like how the story is a continuation of the first movie so it feels like one cohesive story. Spoiler alert! I also thought the twist about the identity of The Iceman was a great shock as Kehoe (Brion James) and Cates were friends since the first movie. Ed O’Ross was the bad guy in every movie of the 80’s so that wasn’t especially shocking.

I was reading on IMDb that “the original workprint of the movie was 145 minutes long. It was cut by either Walter Hill or “Paramount” studio down to 120 minutes, and week before its summer theatrical release additional 25 minutes were cut out by “Paramount” making a final theatrical version 95 minutes long. Frank McRae’s reprisal of his role from the original 48 Hrs. (1982) was entirely cut except for a brief, uncredited shot of him in the background of one scene in the police station. Brion James, also returning from the original, saw his role severely cut down as well to create a faster-paced action-comedy. Also removed was a scene which was partially shown in the theatrical trailer in which Jack explains to Reggie that he has a deadline to track down the Iceman; as such, there is no mention of ’48 hours’ anywhere in the final film.”

It’s a shame Frank McRae was cut from it as he was one of the best things about the first movie as the shouty Haden.

Bernie Casey felt a little underused and I can’t help but think that more of his scenes were cut too; I would love to see the full version but alas it isn’t going to happen any time soon – #ReleasetheWalterHillCut.

The music score is pretty much the same with James Horner returning providing adequate action cues but it never really stands out.

The action is bigger this time around and the bikers are totally unhinged making for entertaining antagonists.

Overall, Another 48 Hrs. is still a fun action comedy but it lacks the grittiness of the first movie and you can tell a lot was cut out of it.

Although I enjoy Another 48 Hrs. for what it was the original 48 Hrs. is a classic of the genre with Nolte and Murphy making for an engaging reluctant buddy duo hurling abuse (and fists) at each other so it’s the original all the way for me.