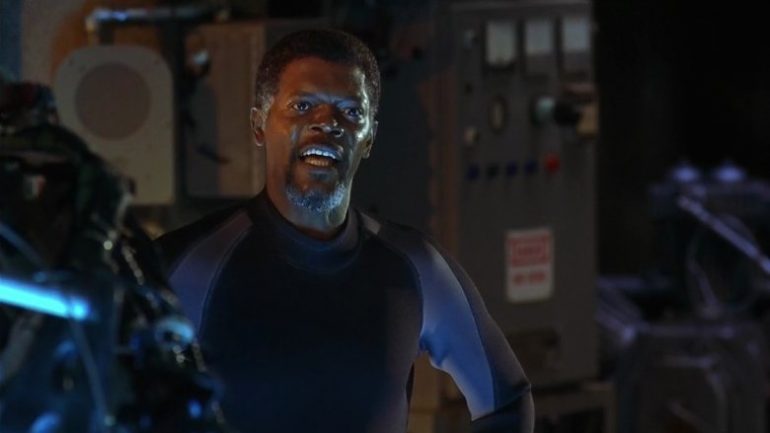 Deaths in movies have become so commonplace that we have stopped flinching at them. Very often they fail to move us, we store them somewhere in our short-term memory and then they’re gone. Just another character hitting the bucket.

Then there are those rare moments of great cinematography which go down in history. Moments which, due to either circumstances which could not have foreseen the death, brilliant shooting or just sheer what-the-hell-have-I-just-seen instances, endure in archives and in our minds. But what determines one good death from another? In reality there’s no recipe for it (that would be too macabre). Every director has his or her own signature trademark and very often the action, violence and yes, even the deaths comply with that style. But let’s take a look at some our all-time favourite on-screen deaths, chosen for their mix of the unexpected, the macabre, the romanticism and yes, the utter randomness of it all.

I remember the first time I saw the Fellowship of the Ring and before I read the books, I remember thinking that Boromir would be the first to die. No reason – just a gut feeling which turned out to be true. This however did nothing to put a damper on the whole scene. On the contrary. For you see, I thought he’d die at the hands of one of the Fellowship, and not defending them. You will remember Boromir’s shifty looks, his ambiguous words when referring to Frodo and the ring as well as his attempt to attack Frodo for not complying with his wishes. When Boromir instead blew the horn to draw the enemies to him and took up the sword to defend Merry and Pippin, we get to see the true Boromir, the good captain who had only been thwarted by the evil influence of the ring. It took a number of arrows shot from the bow of the lead Uruk-Hai to stop him from action as he kept on fighting even after the second arrow found its mark. The shots get slower, reflecting Boromir’s sluggish state by now and he sinks to his knees as the last of the third arrow whistles past and hits home. In his last words to Aragorn, Boromir refers to him as his king, the first time a Steward of Gondor has done so in hundreds of years. Tear shed.

Ah yes, where do we start? With the fact that one of the most gruesome scenes to ever appear on screen starts out as a friendly meal where everyone seems relaxed and enjoying each other’s company? Where it all happens in less than 2 minutes and leaves everyone staring at the screen and replaying the mind-blowing scene in their mind? Or that the actors had no idea what would be happening during that scene? In fact, the looks on the actors’ faces and the screams were a result of actual shock and surprise. The director, and John Hurt, did not divulge the details of the scene to the other actors, including how much blood there would actually be, to get as authentic a reaction as possible. An alien busting itself out of someone’s chest is hardly everyday stuff, even for someone like Ridley Scott. John Hurt will forever be known as the stuff of legends thereafter and as the ugly alien rears his head and dashes off, the viewer will never quite be the same again.

Take a trio of super-intelligent sharks and Samuel L Jackson standing uncomfortably close to the water’s edge, speaking about how they should not be fighting against each other but against their opponents. The camera zooms in on his face when suddenly (and ironically enough) one of their opponents, a hungry shark, jumps right out of the water, clamps the actor firmly in his jaw, thrashes about for good measure while the women scream and then disappears back into the water. A later shot shows the shark still gnashing the poor Jackson underwater while another shark bites off what must have been his head for added effect.

Fun fact: All three actors mentioned so far (Bean, Hurt and Jackson) have actually experienced more on-screen deaths than most other actors. You might recall some of their other movie deaths right now at the top of your head. What is it, you think, that makes an actor so killable in a movie? Must be something in the eyes…

The movie is undoubtedly a classic but if there ever were a prize for the most ridiculous death on screen, this one would have won it, hands down. Imagine two people having a casual conversation in a car. Something happens and the guy in the front (John Travolta) accidentally shoots the guy in the back (La Marr) in the head. One minute they’re talking, the next there’s a gory explosion of blood and other less savoury stuff splattered in the car. Queue in, an argument about where they should clean the car because they can’t possibly drive around in that state. Talk about a way to go.

Drug lords, sprawling villas, gun fights and epic deaths. Inspired by Al Capone, the infamous mafia-lord, Tony Montana is the story of an immigrant Cuban who makes his way to the top of a drug cartel. He aims too high however and everything around him comes crashing down in one final act of heroics. Montana, or how he is better known as Scarface is surrounded by enemies on all sides. With his beloved sister dead next to him, Tony arms himself with an assault rifle and barges through the door to face the hit men. A gunfight of ridiculous proportions ensues and Montana takes down more than 20 men before he finally succumbs to the many bullets he receives – including one he was not expecting at the back. He falls from the upper story landing, into a fountain below, where he floats in his own blood.

From gory, to romantic to downright stupid, some deaths on-screen are hard to forget. Whether you remember them for all the wrong reasons however, is another thing entirely.