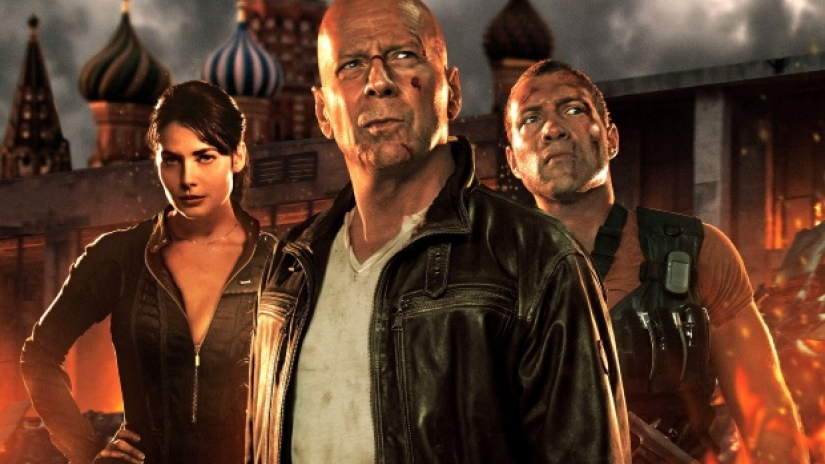 A Good Day to Die Hard deserves to be the last of the series; it has some alright action and is well paced but it has strayed so far from what we originally loved that McClane is now essentially a cartoon.  I actually hate it more with every viewing though and may not watch it again.

Plot: John McClane travels to Russia to help out his seemingly wayward son, Jack, only to discover that Jack is a CIA operative working to prevent a nuclear-weapons heist, causing the father and son to team up against underworld forces.

Review: Well it’s finally here, the new Die Hard film; so, is it any good? Nope. Yes the R rating is all well and good but it’s a shame it has the weakest script of the series.

I was watching With a Vengeance last week and the script to the movie is arguably the best; the dialogue between McClane and Zeus was hilarious and entertaining. The banter between them built up the bond and got you rooting for them all the way through.

But that was 20 years ago; today we don’t want humour in our films, we want it to be gritty, have lots of shaky cam and look very blue. Yes, it has all of these things which I really hated about it. I knew when the director said in an interview that there wouldn’t be the humour of the old films in this one that he shouldn’t be allowed near it, because he clearly doesn’t understand Die Hard. I was right and the film has the nausea inducing shaky cam and the whole setting of the film was grey and depressing.

John McClane is almost more of a supporting character and his son Jack has taken over; Jai Courtney is actually really good in the role and a vast improvement over the whiny little bitch that was Justin Long.

Also, this has the weakest villain of the series; I can’t even remember his name but I’ll always remember the name Hans Gruber because he was a legendary bad guy.

Oh and the majority of scenes you’ve seen in the trailers are not in the film; I hope you’re not waiting for him to say “Damn straight!” because he doesn’t. You also don’t see the hot chick strip down to her underwear. Surely they should finish editing the movie before releasing misleading trailers!!?!

I make it sound as if I totally hated the film but I actually didn’t; despite the shaky cam, some of the action was decent. The car chase was pretty impressive and it’s well paced. It’s almost too quickly paced actually, which makes it lose the heart of its predecessors.

The finale is not short of spectacle and there is a nice little nod to Hans Gruber at the end, which I won’t spoil.

The music still maintains the Die Hard theme and does the job although I did find it a bit loud in places where it drowned out the dialogue.

Overall, A Good Day to Die Hard deserves to be the last of the series; it has some alright action and is well paced but it has strayed so far from what we originally loved that McClane is now essentially a cartoon.  I actually hate it more with every viewing though and may not watch it again.