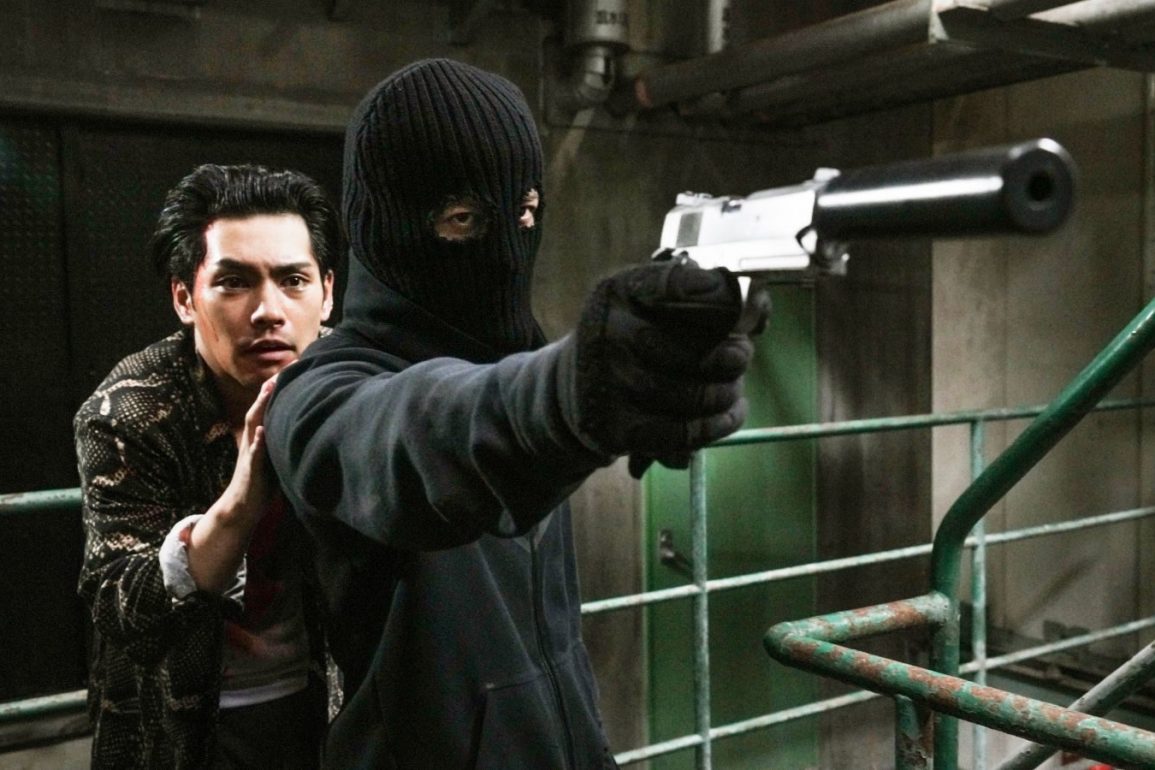 I can’t believe these movies flew under my radar for this long so a big shout out to my friend Saverio for making me aware of their existence. The Fable movies are based on the manga series “The Fable” by Katsuhisa Minami and are two of the most bonkers action movies I’ve seen for some time. They are currently on Netflix so today I thought we would take a look at them and dive into the world of Fable.

Plot: An elite gun-for-hire is forced to lay low and not kill anyone for a year, but underworld figures start to threaten his newly calm and quiet life.

The Fable was released in 2019 and stars Jun’ichi Okada as Akira Sato AKA Fable; he was trained as a killer since he was a young boy and is now an elite contract killer with the nickname of Fable. His boss tells him to lie low for a year so he begins to live in Osaka as an ordinary person with the name of Akira Sato.

Jun’ichi Okada is perfect as Fable/Akira as his face never cracks and the majority of the laughs comes from him trying to fit into every day situations which is something he has never done before.

This is such a strange film with some really out there Japanese humour but that’s what makes The Fable such an appealing movie especially the commercials featuring “Jackal” which are just bizarre. No one finds them funny other than Fable who breaks out in hysterical laughter suddenly after every ad has played on the television.

There is also the running joke that Fable’s senses are so finely tuned that any time he eats any cooked food he finds it too hot and screams. While lying low he is living with his sister who spends most of the movie being drunk, loud and annoying but it’s all an act to hide the fact she’s every bit as deadly as Fable. They make for a great team and watching the two of them take down the bad guys for the action-packed finale is the highlight of the entire film. Admittedly the pacing can be a little slow at times in the first half and it is a little long but the final 40 minutes more than makes up for it.

The characters are all larger than life so it feels very fantastical and captures the spirit of the Manga. Yuya Yagira is particularly unhinged and memorable as Kojima who wants to become a pimp now that he is out of prison but his boss Ebihara is against it.

How do you even review movies like this? You’ll know what I mean if you watch them as they are so… unique. The action is a little John Wick at times which is no bad thing but this goes a little crazier and that final showdown where Fable doesn’t actually kill anyone is one of the best action scenes I’ve seen for some time.

Overall, The Fable is hard to describe but it’s so wonderfully insane with some imaginative action scenes that it almost makes it worth subscribing to Netflix… maybe.

Plot: Akira Sato is the legendary killer known as The Fable. Following the order of his boss and due to being overworked, he lives peacefully with his partner Yoko as ordinary siblings. Akira still works part-time at design company Octopus with CEO Takoda and employee Misaki. CEO Takoda and Misaki are unaware of Akira’s background as an assassin. Meanwhile, Utsubo is a representative for an NPO. However, Utsubo works with contract killer Suzuki to set people up for extortion purposes. They target someone at design company Octopus.

Continuing where The Fable left off, Akira is still living peacefully with his sister Yoko but destiny has other plans as he comes across a disabled girl and discovers he is responsible for putting her there; he tries to help her with physical therapy but then finds out that the man she is staying with was someone he was meant to kill 4 years earlier.

This has a more emotional edge to it and a darker story but there are still moments of crazy humour mostly featuring those bizarre Jackal commercials; the fact Fable spends most of his spare time with his pet bird on his head only adds to the strangeness of it all.

Shin’ichi Tsutsumi is our main villain Utsubo and he is pure evil as he regularly molests the disabled girl Isaki (Jun Kurose); he pretends to be this great man who looks out for the children which makes him even more of a monster.

This sequel isn’t as funny as the first film and I found the pacing dragged in parts but once again it’s that finale which makes up for it; the scaffolding sequence is arguably even more stunning than the factory battle. I still can’t even tell how they did it because if it was CGI I didn’t notice it; it’s mind-blowing stuff and well worth any slowdown in pacing.

Overall, The Fable: The Killer Who Doesn’t Kill is a worthy follow up with some incredible action towards the end. Both of these movies have so many unique aspects that I won’t even try to compare them but they have exceptional set-pieces and crazy humour which doesn’t always land but still succeeds in entertaining. I will admit that The Fable movies will be an acquired taste but I advise to stick with them as the action at the end of both movies is frankly jaw dropping.