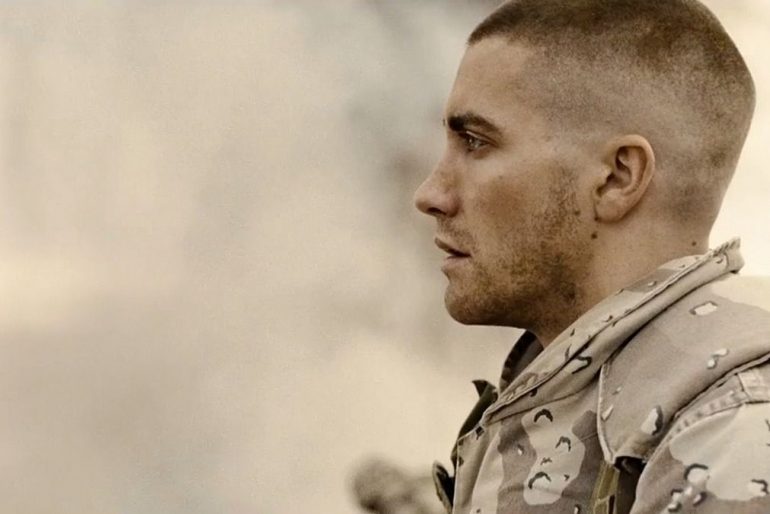 With the recent release of the fourth Jarhead movie on home video I thought I would take a look at the series and how it evolved from war movie into an action series. Welcome to the Suck!

The original Jarhead movie was based off the memoirs of U.S. Marine Anthony Swofford and starred Jake Gylenhaal in the lead role. It was a psychological study of operations desert shield and desert storm during the gulf war; through the eyes of a U.S marine sniper who struggles to cope with the possibility his girlfriend may be cheating on him back home.

It’s a rather strange movie and not one I revisit often as I never know how quite to feel by the end of it. The Marines aren’t exactly painted in a positive light with no one to really root for; they are all hanging on by a thread mentally and the real battles seem to be with their inner demons.

Gylenhaal never disappoints and his portrayal of Swofford makes him seem slightly unhinged and it feels like this is what it would genuinely be like to walk in their shoes.

There is very little actual war in this movie focusing more on the boredom the Marines go through while waiting to “kick some ass” so rest assured this is no action movie but I’m just covering it to be a completist.

The cinematography is sublime with the burning oil fields looking terribly beautiful and paint a genuinely Hellish picture. The visuals will haunt you after viewing and the performances are all superb; Peter Sarsgaard really stood out as Alan Troy. He has a scene where he breaks down because he NEEDED to take a shot against the enemy but it was denied and you aren’t quite sure whether to laugh or cry.

Anyway, if you haven’t watched it Jarhead is definitely worth checking out but don’t go in expecting an action flick as there is very little.

When I heard a straight to DVD sequel was coming out to Sam Mendes’ Jarhead I think I was as perplexed as everyone else as it seemed like a standalone feature. Admittedly Jarhead 2 does feel a little like it for the first 15-20 minutes as we see Marines horsing around on a base in Afghanistan but when they are sent out on a mission it quickly ramps up into a men on a mission movie and has far more action than the original.

This time a corporal and his team must muster all the courage and firepower they can to fight their way across war-torn Afghanistan and shepherd an important anti-Taliban woman to safety.

This entry is far better paced and to be honest I’d watch this before the first movie any time. It sets up the characters well and has one of my favourite underrated actors in Cole Hauser; I think he always brings a brooding intensity to his roles and he’s perfectly cast as a Navy SEAL. Avatar’s Stephen Lang is another actor that can play these kinds of roles in his sleep; he has a military bearing and is always believable in movies like this.

Josh Kelly plays our lead Chris Merrimette who becomes the new team leader and his first day on the job is a challenging one as his squad is attacked by Taliban fighters and several of them are killed. They pick up Cole Hauser’s SEAL who says they have to protect a local woman from the Taliban as she is a beacon of hope for the people.

Bokeem Woodbine plays Danny Kettner/A-Slash who is reluctant to work with a local Afghan soldier but will their relationship change by the end of the film? I think you can guess…

The original Jarhead isn’t an action movie by any stretch of the imagination, but this sequel very much is and has impressive set-pieces on a regular basis. Some of it is let down by an overuse of shaky cam which is effective at times as it created a sense of chaos, but it got a little frustrating. There is also some CG blood which is my pet peeve but I’ve seen worse.

Overall, Jarhead 2 may be tonally different from the first movie but the way I see it it’s best to just see these as action movies that have no real connection and enjoy the ride.

I was especially interested in this entry as it was directed by William Kaufman (Daylight’s End) and stars Scott Adkins. The story is about a group of Marines who must protect a US Embassy in the Middle East when it suddenly comes under attack from enemy forces.

I’ve read a few reviews on IMDB which dumped all over the film for its lack of accuracy in its portrayal of Marines but as I have never been in any kind of military then I can’t comment on such things. One review on IMDb actually said it’s like a “pure classical action movie setup, that no one wants anymore…” speak for yourself, dickhead.

This entry definitely goes even more in the action movie direction and has arguably the most bullets fired in any movie… ever but I have no problem with that at all. Scott Adkins doesn’t get to have any fight scenes so if you’re looking for that then you’ll be disappointed but I liked see him try something different.

Our lead Albright is played by Charlie Weber who is decent enough and certainly looks the part. His character is kind of a dick and a cowboy who wants to be first all the time and during one training exercise he rushes ahead from his team and his actions would have got them all killed. So his arc is to learn to work with his team which he is going to have to do when a group of terrorists attack the embassy he is working in. It takes a little while for the action to kick in but once it does it doesn’t let up until the end.

The script has a few nods to other movies like Pulp Fiction and one of the characters is called Stamper which I imagine is a nod to film producer Jay Stamper who is also a good friend of director Will Kaufman. Stamper feels like a Hudson-esque character who bitches all the time but there are some annoying characters like the guy with the camera who really needed to get killed but for some reason survived.

Overall, Jarhead 3 goes all out in the action department with a huge bodycount although Adkins fans may be disappointed he doesn’t get to use his fists or feet at any point.

The fourth and (thus far) final entry in the series has Jarhead 2 director Don Michael Paul return and this seems like his comfort zone as he has had plenty of practice with military themed movies having directed a few of the Sniper films.

The action is slick and the movie is well shot but it is really more of a standard action flick so it bears little to no resemblance to the original movie. If you watch these movies as if they are Sniper spin-offs then you just might have a good time. I feel like the next entry should be Jarhead vs. Sniper as tonally they feel similar.

This time we follow a squad of elite soldiers, led by Gunnery Sergeant Dave Torres (Amaury Nolasco), as they risk their own lives in the hopes of saving an ally they’ve never met. The ally is pilot Ronan Jackson (Devon Sawa) who has been captured behind enemy lines. I still can’t believe Sawa was the lead in the first Final Destination as he looks like a grizzled badass.

Amaury Nolasco is a sympathetic lead who regularly tries to call home to speak to his daughter to try and give him a bit of depth. I actually found Jack’s wife and her scenes with his father (played by Robert Patrick) the best as she is pregnant, so we want him to make it home alive.

I go into minor spoilers here so if you haven’t seen the movie then stop reading.

Law of Return has a ballsy finale where one of our main protagonists is killed off and the bad guy even gets away so I feel like the franchise may not be done yet as I want to taste sweet vengeance. The sombre ending worked for me as it made it more believable and was one of the best things about the movie which I’m sad to say was a little forgettable. There are so many other movies and TV shows with stories like this that it doesn’t really stand out above them and I couldn’t even tell you the character’s names without looking them up on IMDB.

That is my brief look at the Jarhead series; it’s so bizarre to see a film which was absolutely not an action movie to get 3 sequels which were. Military purists may not like some of the liberties taken with the action scenes so they may not be accurate but who cares? As disposable action fodder they do the job and there are worse ways to spend a drunken Saturday night.