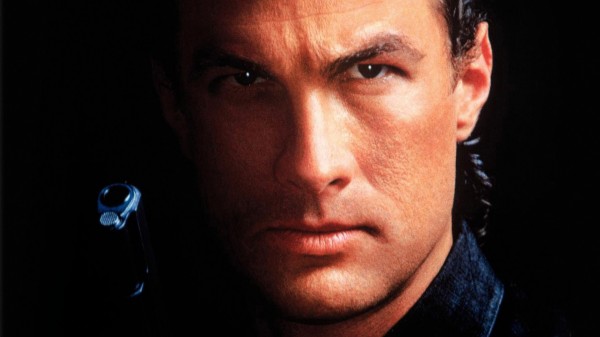 Above the Law remains Seagal’s masterpiece and if there is one of his movies that belongs in any action fan’s collection it’s this.

Review: For me this and Out for Justice remain Steven Seagal’s best films quite simply because they are genuinely good movies.

This was Seagal’s first starring role and essentially laid the template for pretty much every future Seagal flick since: Shady CIA background, the Mafia, the ponytail and running like a girl.

Seagal actually gives arguably his best acting performance in Above the Law and this is one of the few roles where we actually see him bleed. He’s not the invincible killing machine we see in every movie now but a man fighting for what’s right.

The villain of the piece is played by the utterly evil looking Henry Silva; he just couldn’t play a convincing good guy because he’s the most evil looking guy ever.

He has scared me ever since I first saw him in Buck Rogers when I was a kid and frankly he still gives me nightmares. In this movie he has the awesome name of Kurt Zagon and he has no problem torturing priests and killing anyone that gets in his way. I’m surprised he doesn’t run for office.

We also get a very domestic looking Sharon Stone who spends pretty much the entire movie crying and being scared. Luckily though Nico (Seagal) is there to kick the Hell out of any bad guys who threaten his family.

There is a great bar fight in this movie with Seagal (as usual) bullying his way around for information. The movie is well paced with plenty of ass-kicking action and it still stands up well 26 years later. Yup, 26; feeling old yet?

The story is genuinely interesting and unpredictable with plenty of great scenes.

Overall, Above the Law remains Seagal’s masterpiece and if there is one of his movies that belongs in any action fan’s collection it’s this. A classic actioner.