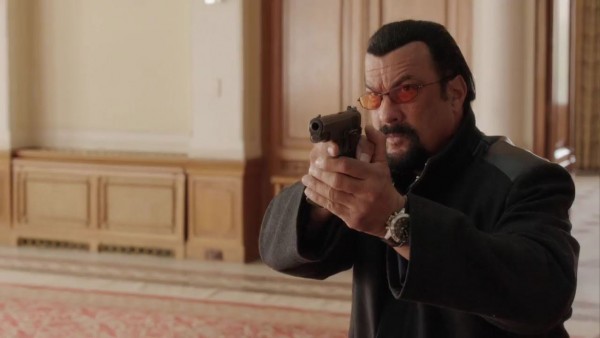 Absolution is saved by some imaginative violence and Byron Mann’s easy going coolness. It’s let down by Seagal just being the same as he always is and using too many doubles during the action.

Plot: When a contract killer (Steven Seagal) encounters a girl on the run from a mob boss (Vinnie Jones) with powerful political ties, he is torn between protecting the girl, and remaining loyal to the government agency that hired him for the mission.

Review: Another week, another Steven Seagal masterpiece. Absolution isn’t quite as bad as a lot of his recent output but that’s mostly due to the involvement of Byron Mann. He plays Chi, John Alexander’s (Seagal) trusty sidekick. He gets to kick the most ass and actually has some decent action scenes; Chi is likeable and cool and frankly everything Seagal is not in this movie.

Seagal still lumbers around and uses doubles a lot of the time which does spoil a lot of the action but like I said, it’s not as bad as some of his other recent features. At least he isn’t dubbed… not that I noticed anyway.

Vinnie Jones plays the big villain and is convincingly scary… so no acting required there then. The opening scene is quite disturbing but mostly relies on sound effects rather than visuals so it lets your imagination do most of the work.

The action is satisfyingly violent with some inventive deaths and blood squibs; there isn’t anything spectacular aside from an explosion with a guy being blown out of a window… which was surprisingly impressive.

It does look cheap in places though and there’s a difference between a film with a low budget and looking cheap.

There isn’t anything particularly amazing or new with Absolution and some of the supporting cast are pretty poor actors as well. Seagal still delivers his lines with zero personality and causes more unintentional humour than anything.

There is a pretty decent fight scene in a nightclub so it’s not without a few thrills but it’s difficult to recommend even for die hard Seagal fans… do they still exist?

Overall, Absolution is saved by some imaginative violence and Byron Mann’s easy going coolness. It’s let down by Seagal just being the same as he always is and using too many doubles during the action.