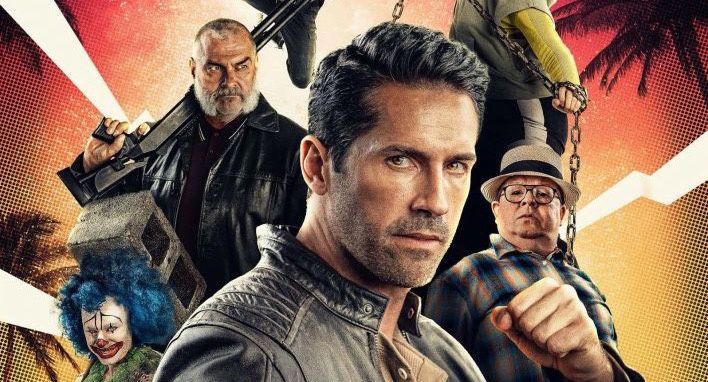 Accident Man: Hitman’s Holiday is one of the best action movies of the year: it’s as immediately appealing as its predecessor with more laughs and even crazier fights; Mike Fallon is one of Scott Adkins’ best characters so I hope we get at least one more film in the series.

Plot: Mike Fallon, aka The Accident Man, is back and this time he must best the top assassins in the world, to protect the ungrateful son of a mafia boss, save the life of his only friend and rekindle his relationship with his maniacal father figure.

Review: Accident Man: Hitman’s Holiday has been one of my most anticipated action pictures this year as Scott Adkins is one of the last old-school action heroes keeping the genre alive.

Mike Fallon is up there with Boyka in terms of Adkins’ best characters as you can see he is clearly enjoying himself and just having a good time. Sarah Chang nearly steals the show as Siu-ling; she’s essentially Fallon’s friend but he pays her to attack him after a job to keep him on his toes; she provides a lot of laughs but also has some fantastic moves and arguably deserves her own spin-ff.

I need to watch it a few more times to see if I prefer this to the first film or not but either way Hitman’s Holiday is still a rollicking good time with more humour and no shortage of first rate fight scenes. It’s hard to pick a favourite moment but I think Poco the Killer Clown is one of the craziest characters of the year; he’s basically the Joker on steroids who can hold his own in a fight scene. He can’t feel any pain so no matter what Mike does to him he just stands there and takes it. Then we have the climactic fight between Adkins and Andy Long which doesn’t disappoint as both show off their incredible skills.

Sadly there are some CG explosions throughout and they are noticeable due to budget restraints but it doesn’t really detract from the enjoyment factor; we get some hilariously violent kills but it’s never particularly disturbing as it’s like a cartoon brought to vivid life. It almost feels like a James Bond movie at times with Finicky Fred becoming the Q character as he creates all these wacky inventions to help Mike Fallon (Adkins) be a better killer.

Ray Stevenson still cracks me up as Ray who is Mike’s surrogate father figure; he’s just seething with rage for most of the film and for some reason any time he swears or shouts I am in tears of laughter.

Overall, Accident Man: Hitman’s Holiday is filled with laughs, violent kills and stellar fight scenes with Scott Adkins once again showing his comedic chops as well as his martial arts skills. Like the first film it is easy to rewatch and I’ll be happy to revisit the film again on a regular basis. I also hope we get a third film as I feel like this should be a trilogy.