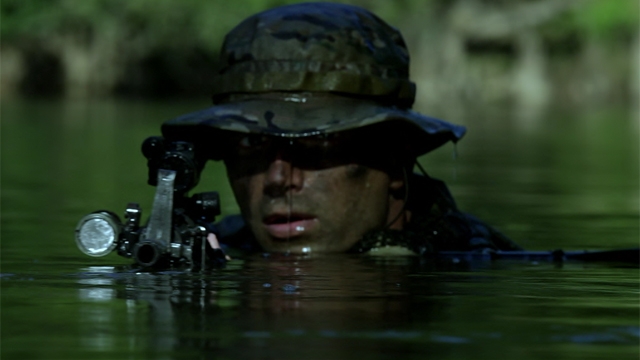 Act of Valor may not win prizes for acting but the set-pieces are impressive and gives us an idea of the Hell these men go through on a daily basis. The score is one of the year’s best too and the cinematography is first rate.

Plot: When its latest mission leads to the discovery of a deadly terrorist plot against the U.S., an elite team of Navy SEALs sets out on a global manhunt. As the men of Bandito Platoon race to stop an attack that could kill or maim thousands of American civilians, they must balance their commitment to their duty and family back home. Each new piece of intelligence they gather reveals a shocking twist to the plot as they track the terrorist ring to the U.S.- Mexico border.

Review: Before Act of Valor became a movie I remember it was initially going to essentially be a recruitment video to encourage people to join the Navy SEALs but would end up becoming a movie showcasing the realistic kinds of  situations they have to face on a daily basis.

Despite the generally negative reviews I thought it was very entertaining and surprisingly moving. It demonstrates what a tough job the Navy SEALS really do and how they have a particular code of honour.  What they want most during a mission is to make it home to their families and sadly this isn’t always the case.

Act of Valor is beautifully shot and the action scenes are impressive, especially the jungle rescue scene which uses all practical vehicles and weapons rather than CG overload.

The music score from Nathan Furst is the standout for this movie and its achingly sad with a memorable theme that haunts you long after viewing. You may go in expecting triumphant sounding brass and military bombast but that’s not what we get giving the movie a little more gravitas.

It’s a surprisingly somber tale which doesn’t go the way you’d expect and you grow to genuinely care about each of the SEALs on their deadly missions where no one is guaranteed tomorrow.

Some people have described it as Call of Duty: The Movie which I agree is true in parts, especially with the cam-gun but that doesn’t give the film-makers enough credit. It certainly doesn’t glorify the violence and it also contains a very disturbing torture scene which is tough to sit through. Nothing is sugar coated here and you really get a feel for what a day in the life of a SEAL is like and I for one know I wouldn’t last 15 minutes in their shoes.

I found the story to be equally thrilling and moving, despite the odd bit of ropey acting but I let that slide as some of the main characters aren’t actors but genuine Navy SEALs. They are the real deal and once again it just helps to make it that bit more authentic.

Overall, Act of Valor is a surprisingly moving tale where not everyone will make it out alive; the score is sublime and the cinematography looks fantastic making this a bit of a just-see.