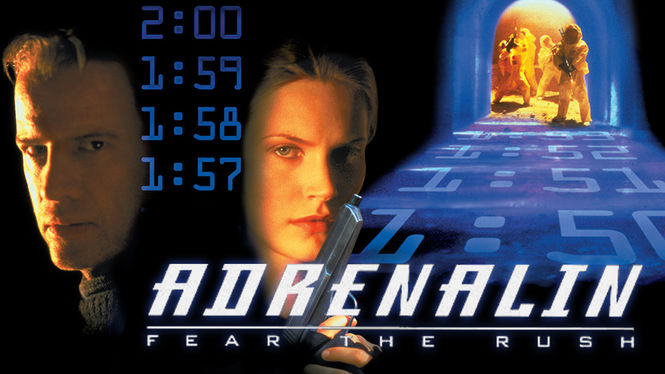 Adrenalin: Fear the Rush isn’t an amazing film and it sounds like it’s been edited so much by outside parties that it doesn’t resemble writer/director Albert Pyun’s vision but any film with Christopher Lambert is worth watching at least once and this isn’t short on action and violence.

Plot: A bioweapon leaks in Eastern Europe and spreads west. It mutates in a quarantine area, creating a killer monster. Can a group of cops stop it and the new virus?

Review: I have a soft spot for Albert Pyun movies; he rarely works with a massive budget but can create some fun tales regularly set in a post-apocalyptic future. Adrenalin stars Christopher Lambert and Natasha Henstridge in a movie that almost feels more relevant now than it did back in 1996 due to all the talk of quarantine.

The majority of the film is set in a quarantine zone with Natasha Henstridge’s cop Delon hunting down (or is she being hunted?) a mutant that is killing people including some of her fellow officers. Backup arrives in the shape of Lemieux (Christopher Lambert) and they team up to try and take down this seemingly unstoppable monster.

Adrenaline is a paltry hour and 10 minutes but there are apparently several versions of the film in distribution. According to IMDb the official US version is 76 minutes long (with 6 minutes being the end credits) which is the version I have on Blu-ray but there is also a European/UK version that is 102 minutes long. Albert Pyun has said previously he intends to restore a 110 minute Director’s Cut restoration of the film but it’s sadly not on this Blu-ray.

Needless to say the 76 minute version doesn’t give us a ton of characterisation other than Delon has got a fake passport so she can take her son across the border to safety. Once again according to IMDb Pyun wanted to “create a real time experience and shot the film as a news crew might cover a war. There was less reliance on narrative and traditional movie plotting, with the film being more akin to a documentary style, where action revealed the story and character. Pyun wanted longer takes with less coverage for editing to give the audience a “you-are-there” feeling.”

This is really Henstridge’s show with Lambert only there to bark orders at her while he gets regularly shot and injured courtesy of our mysterious “subject”. There are a few gory moments and despite being heavily re-edited by Bob Weinstein at Dimension Pictures it’s still a fun movie with a higher budget than what we usually see with many Pyun pictures.

It’s nice to see Andrew Divoff play a rare good guy as he is mostly known for playing antagonists like in Another 48 Hrs; he was also of course in Nemesis 4, directed by Pyun.

This is a grittier role from Christopher Lambert than we were used to seeing as around this period he was starring in fun action movies like Gunmen where he would laugh and crack one-liners but this is more serious and lacks any levity so it keeps things intense.

Overall, Adrenalin: Fear the Rush isn’t especially spectacular but I enjoy any movie with Christopher Lambert as he has something immediately appealing about him any time he is on screen. Natasha Henstridge also does the best with what she’s given but I would like to see that full uncut version as Pyun intended. I paid $37 for this Blu-ray so it’s a shame there are no special features to speak of; it’s really not worth forking out the cash for so I would maybe wait for that elusive longer cut.