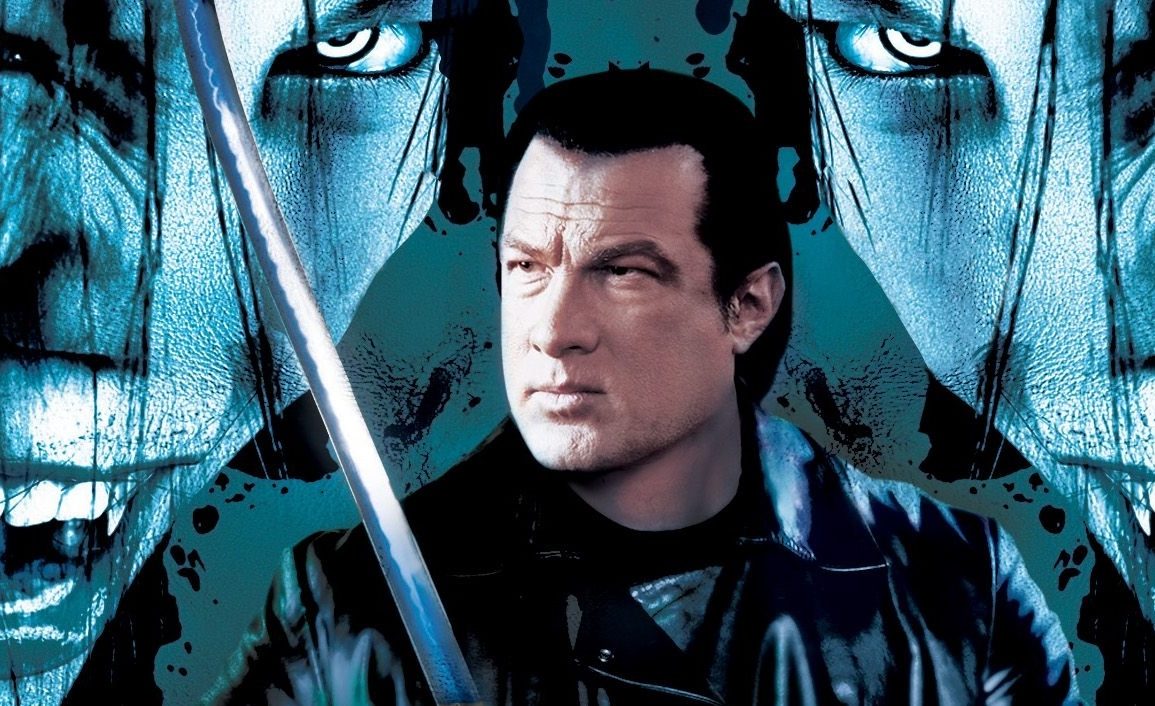 Against the Dark wasn’t as awful as I’d heard and it had enough gore to keep me entertained but there were just too many characters to keep up with and Seagal just shows up randomly and kills things every so often.

Plot: Katana master Tao (Steven Seagal) leads a special ops squad of ex-military vigilantes on a massacre mission, their target: vampires on an post apocalyptic globe. Tao is the survivors’ only hope and he knows the only cure is execution.

Review: I only watched Against the Dark starring Steven Seagal for the first time recently and I have to admit my expectations were minimal as I’d heard it was one of his worst movies. After watching it I’ll admit it wasn’t exactly amazing but he has done plenty of worse movies, especially over the past 10 years. He at least isn’t dubbed in this which is rare.

I liked that Seagal actually tried something a little different as this was really his first movie with horror elements but the problem is his character doesn’t really do much except show up at the last second to kill some vampire/mutants as they are attacking one of the many stupid humans of the cast. He only ever really uses his sword or guns so don’t expect to see his aikido moves, although there is some fighting.

There are far too many characters in this movie and I didn’t care about any of them. How hard can it be to stick together? They still manage to find ways to end up on their own and for the most part get saved by Seagal or one of his crew of hunters which gets quite tedious after a while.

To be fair the best character in this is Tagart (Tanoai Reed) and all I was thinking throughout was “I could swear that’s Dwayne Johnson” but he is in fact his stunt double so I’m not going crazy. He takes on every creature that comes at him and his big build makes him a formidable foe for any opponent.

I’ve read some reviews on IMDB and one described this as a “poor man’s Blade” which I guess is a pretty apt description but Blade is a superior movie in every way with about triple the budget.

When I saw Keith David was in the cast I was hoping for a Marked for Death reunion but sadly he and Seagal don’t share the screen at any point. Lynden Ashby (Mortal Kombat) also co-stars but he gets no action scenes spending most of the movie trying to convince Keith David not to blow up the building where Seagal’s crew and the group of survivors are located.

It’s strangely not that involving story-wise as we follow these uninteresting characters around an empty hospital as they try to escape to daylight; it almost feels like a videogame similar to Resident Evil.  Go down this corridor, turn left, shoot monster, continue and so on. This goes on for 90 minutes but the reason I didn’t hate the movie was the amount of bloodshed; there is no shortage of kills with limbs being ripped off regularly so gorehounds will enjoy that aspect. I liked the practical sets too which I believe was in Bucharest so this was all shot in a real location.

There are a few jump scares too but the lack of memorable characters or dialogue means you won’t care any time someone does die.

Overall, Against the Dark isn’t a movie I’ll rewatch any time soon but I can at least say I’ve seen it now. If you are a die hard Seagal fan and want to see him do something a little different then you may enjoy it otherwise just watch Blade again instead.