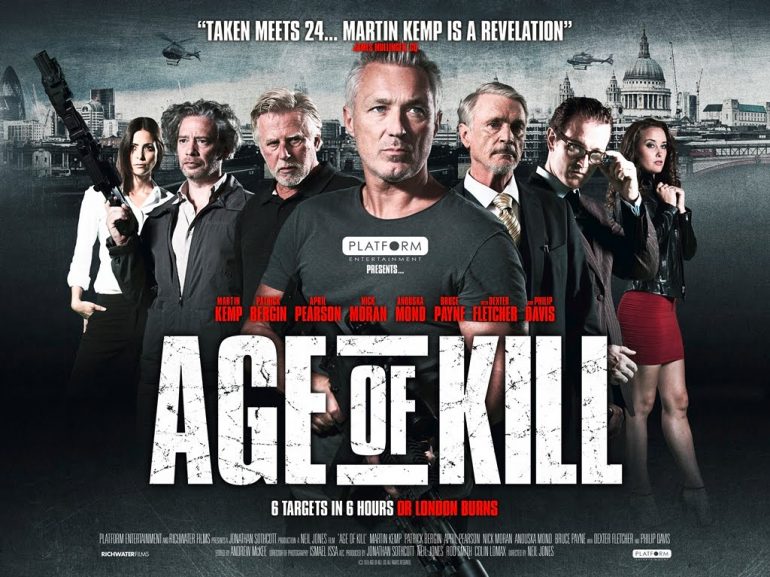 Age of Kill is another winner for Richwater films with a great cast, fast pace and some decent action.

Plot: A black ops sniper is blackmailed by a psychotic international terrorist into killing 6 unrelated people in 6 hours… but there is more to the victims than meets the eye.

Review: Age of Kill is the new action thriller from Richwater films, the company behind Vendetta and We Still Kill the Old Way. I loved both of those movies and they once again score another winner with this movie as it has an immediately engaging and unpredictable story.

Martin Kemp flexes his action muscles and proves to be incredibly badass and yet thoroughly cool at the same time.

For the record I totally want to see him team up with Luke Goss on a film in the future; they both have a similar look and could easily play family members.

Kemp is Sam Blake, the black ops sniper mentioned in the plot; he’s not a hero but a man who has done his share of bad deeds and a mysterious stranger who has kidnapped his daughter, wants him to kill a few more. It’s actually a little like Saw, especially in terms of the kidnapper’s disguised voice but thankfully it’s not as disturbingly gruesome.

Age of Kill is gripping and takes what could be a generic thriller and gives it surprising depth; we get to explore the undercurrent of racism in the UK but I have to admit I would have liked to have spent more time on the political side of things.

At 85 minutes the film moves along at a breezy pace but it is a little too short and like I said, I’d have liked to see more of the political climate. I guess that would have killed the pacing but what we get is hugely entertaining.

The supporting cast is first rate including Bruce Payne, Dexter Fletcher and Patrick Bergin. I hated seeing Patrick Bergin looking like an old man but he is fantastic to watch on screen and has a great voice.

In terms of action there are a few hand to hand fights including one from Kemp’s point of view which was quite innovative; there are mostly shoot-outs as well but nothing on a massive scale. The budget is limited but director Neil Jones keeps things tense and exciting.

Overall, I don’t want to say anything else and spoil the movie but Age of Kill is another winner for Richwater films with a great cast, fast pace and some decent action.