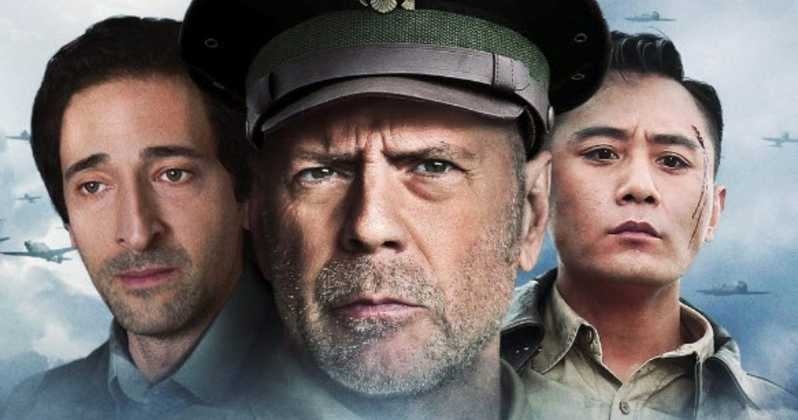 Air Strike is poor even by my low standards with laughable dubbing and already dated special effects; Bruce Willis shows up for the paycheck and to shout a bit but I would give this movie a pass.

Review: Even the trailer for Air Strike didn’t look particularly good but it was just sitting there on Netflix last night so I thought I would give it a watch out of morbid curiosity and the result wasn’t a surprise.

Bruce Willis hasn’t been able to sell a movie to me for some time but he actually has a larger role than I expected in this; even then he isn’t the main character. He nearly shows some personality though as he shouts and swears a lot treating his men like dirt but slowly becoming mildly more sympathetic. Keep an eye out for his daughter Rumer who is also in the movie… wait, is that Adrian Brody? What the Hell is he doing here? Didn’t he win an Oscar? Oh dear…

The main protagonist (I think) was Xue Gangtou (Ye Liu) as he and a ragtag bunch try to protect a truck carrying a device that could change the course of the war. Unfortunately I found that there were so many characters that I very quickly stopped caring about what was going on and felt nothing throughout. It’s never a good sign when Instagram becomes more interesting than the movie you are watching…

The visual effects are mostly terrible and unconvincing using piss poor CGI however, there were admittedly some impressive sequences and Air Strike was at least well-paced.

I think the most intense scene featured a large group of local villagers hiding in a cave during one of the air raids and they start to run out of air which created a real sense of claustrophobia. There was a feeling of desperation as they all clamour over each other trying to reach for air.

The air raid sequences are plentiful and although the effects don’t quite live up to the ambition at times they still capture how nightmarish it must have been to have this potential threat looming.

The dubbing is mostly atrocious so if you can find an original language version of this movie then it might be marginally better but I doubt it; it’s all so melodramatic that when any of the characters die we never really care as they had very little in the way of development and I found myself laughing unintentionally.

Overall, Air Strike is pretty much as bad as you’d expect with little to recommend it unless you’re a die hard (get it?) Bruce Willis fan.