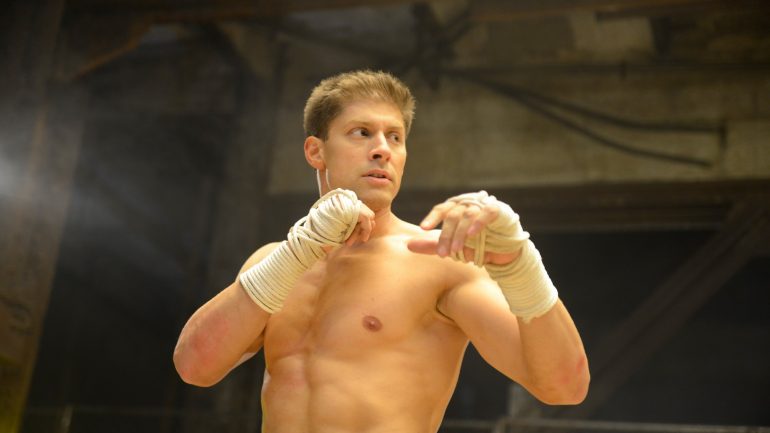 Alain Moussi makes his debut as Kurt Sloan in the upcoming Kickboxer reboot which will start shooting in the Fall.

He exclusively talks with The Action Elite about the movie, getting JCVD’s blessing and more.

So you’re signed up for the upcoming Kickboxer reboot; this is your debut as a lead, how did you get involved?

Well, the process actually started about two years ago; I was working on a film in Montreal doing the action design and stunts with our team. When we did our first show for producer/director Dimitri, he really liked it and really liked me and my look and asked if I could audition for the lead role because they didn’t have a lead at the time. So that’s how I met Dimitri and it just so happened that he owned the rights to Kickboxer. So last summer he called me up and he asked me to come down to LA to do a live show for him and Ted Field who is also co-producing with Radar Pictures. So I went down with my buddy and we put a fight together and Ted Field loved it. We did some more screen tests and that went very well and here we are.

Are you a big fan of the original?

I’m a crazy fan of the original; I actually started practising martial arts right after I watched Kickboxer and Bloodsport. Those were the years that I actually started training and I was a HUGE Jean-Claude Van Damme fan and still am. So I’ve been following his career since I was a kid so to actually be involved in a remake of Kickboxer is like a dream come true; it’s amazing.

How has the fan reaction been, so far?

Well, personally I haven’t seen that much of a fan reaction other than a couple of interviews and some posts online. I’ve also seen a couple of videos on YouTube which were actually positive. Right now they are talking more about GSP and Bautista, to be honest with you rather than talking about me. Right now it’s been good but you know, it’s a remake so obviously there will always be mixed reactions from people who don’t like to see their favourite films remade because they’re so attached to them. I understand that and I even feel the same way sometimes when I see a remake coming up; will it be good? Will it not be good? Will it be the same? In general, I think the reaction has been very positive.

I had been against remakes but then I sat and thought about it and figured the original movie is still going to be there so it won’t be ruined. In fact, it can be a positive as it might bring some new fans to the original movies which can only be a good thing.

Yeah, you look at what we’re doing where we’re trying to take the same film a redo it today; that’s not the point so we don’t try to do that. We’re taking the themes from back then but the story and many other elements will not be the same. It’s twenty five years later, so Thailand’s not the same, the world doesn’t look the same and the world doesn’t even see martial arts the same way. So there has to be an evolution and the film needs to be modernized for today’s audience. It’s also going to hit a different audience than it did twenty five years ago as well. I think it’s a cool thing and obviously I know what’s going on with the story and everything so I think people will be happy whether they are the new audience or people that love the original. I think it will make audiences very happy.

How does your version of Kurt Sloan differ from the original?

I can’t say too much about the actual script, story, etc., but I can say that the character himself will be my interpretation of Kurt today. Obviously I’m not going to try and replicate everything that Jean-Claude did; to me, he did the perfect Kickboxer at the time. For me to even try to do the same thing would be crazy and I don’t see myself doing that. I want to bring what I can to the table and I’m going to bring the interpretation that I see into this new story. So that’s what I intend to do so hopefully it will be something that people like.

Now I think the most important question everybody wants to know is… will you recreate JCVD’s classic dance scene?

(Laughs) You know that’s the first question that everybody asks and I cannot say anything about it just now… but it’s definitely one thing everybody asks so I told the producers that. We’ll see, but I definitely couldn’t the way he did it… that was classic.

What do you want fans to take away from Kickboxer?

That’s a good question (laughs); I know that the fight co-ordinator on Kickboxer is Larnell Stovall and he’s creating the fights for this film so they are going to be awesome! I think the action is going to be out of this world and that everyone will be extremely pleased with it. There’s also a lot going on with the story so I hope people come out and don’t just think “I saw a cool fight movie”. I hope they feel like it has a great story and that they really felt for these characters. Plus it has awesome action and that’s what I really hope people get out of it.

I’m on week three now, so what I’m doing is training two or three hours minimum every day doing a mix of strength and conditioning, kickboxing, Brazilian Ju-Jitsu, fight choreography, gymnastics and doing yoga for my stretching. I’m really mixing my training where every day I’m doing a few training sessions with different coaches. I’m on the third week, as I said but the first two weeks were pretty painful but right now I’m feeling great so I can’t wait to see the result at the end of this summer. We’re not shooing until the fall, for sure so I’ve got a crazy schedule but I think the results will be really good.

You can also Barbeque while doing the splits now… (See Below)

Yes! I can now Barbeque while doing the splits; it’s my new thing (laughs). I’ve got a couple of videos coming up that are pretty funny. I’m currently trying levitation; Van Damme is the master of the splits so how do you bring something new? So there you go…

It would be cool to have JCVD do a cameo as your dad; I take it that’s not on the cards?

I actually don’t know, but I think it would be cool too; it’s not my decision in the end. I’ve talked to Jean-Claude since the announcement and he was very positive about it; I don’t know how he actually feels about the remake part but he congratulated me on getting the role. To me, that was really cool to have the star of the original film give his blessing.

The original ended up having several sequels; could you see yourself returning to the character in a follow up or have you not given that much thought at this stage?

I’ve thought about it because that’s what they want; Ted Field has talked about making it a franchise so if it happens I’ll be really happy. I think a follow-up with the character is totally do-able so if it’s a big hit then of course I’d be happy to come back and play Kurt again.

I’m definitely interested in a career as an action star and that’s what I’ve been striving for over the past few years. When I first started martial arts and that’s what I wanted to do, I kept thinking “How do I do that?” and that was a huge mystery right there. So finally I was able to get into film through stunt-work and having a blast while doing it. I eventually got the opportunity to go for it and I really want to become an action star. Would I do other genres? In the future, I think that’s a definite possibility because I’m a huge fan of film in general. I watch all kinds of films but I really want to establish myself in the action genre and stick with that for a while. So that’s what I see myself doing now but in the future? Who knows?

It’s great to find someone who genuinely wants to be the next action star; a few people have tried but not really made it which is a shame…

See, that’s why I’m such a huge fan of The Expendables; to me it was like the ultimate. I was like “Oh my God, I’m going to get to see all my heroes in a movie together!” It was like watching The Avengers for me. There are some action stars in the industry now but certainly not as many as there was before so if that’s what I could bring to films then I’d be super happy with that.

What else do you have in the works?

Right now I’m putting all my energy into Kickboxer; I don’t want to really think about anything else and put everything into this movie. I’ve finished another project where we were shooting for five months then I came home to see my family and begun my training for this movie. I feel that if I give this my all then it will open the doors for whatever else is to come in the future.

I think Ted Field said before that if you look at what he’s put together; he’s got a recognisable brand, you’ve got a director who knows how to shoot action, one of the best fight co-ordinators in the industry in Larnell Stovall and you’ve got a cast who are all real action guys. They can all fight, so the action is going to be epic. I think with all of these elements together, it’s going to have an awesome result. You’ve also got the producers too who are all major martial arts fans and they really want to see it all come to life. Once you’ve got everybody in the team on the same page then it’s going to be very powerful! For me, knowing that everyone is passionate about the project really brings it to another level.

I actually just came up with an idea for a sequel; bring in Scott Adkins as Boyka and call it “Kickboxer: The Undisputed”. There’s your crossover franchise, right there.

Oh man, I love that (laughs); for me to be on-screen with Scott Adkins would truly be an awesome thing.

Thanks so much for taking time out to chat with The Action Elite and good luck with the film.