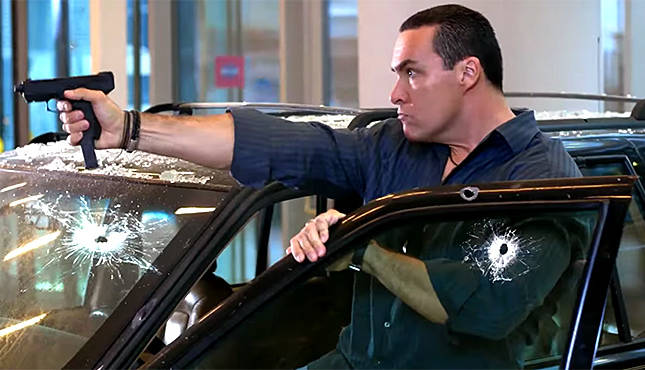 Alexander Nevsky’s directorial debut Black Rose is out soon and tells the tale of a Russian Police Major who is enlisted by the LAPD to help solve a series of gruesome murders perpetrated against young women by a sadistic sociopathic killer on the mean streets of Hollywood.

Alexander chatted with The Action Elite about the project.

How did the idea of Black Rose come about?

I created this story as a sequel for my film “Moscow Heat” which was theatrical box office hit in Russia/CIS in 2004 and was released worldwide in 2005 (including DVD/VOD release in North America). But later “Black Rose” become an original script which was written by Brent Huff and George Saunders. Brent directed my film “Treasure Raiders” and George wrote “Hard Corps” for JCVD. Great Sheldon Lettich liked my idea a lot, polished “Black Rose” script and came on board as executive producer.

What made you want to direct as well as star?

I always wanted to try directing. And I specifically created this project so I can produce, star and direct. But I was smart enough to surround myself with very experienced people: Sheldon Lettich, another executive producer Brian Gores, director of photography Rudy Huron, editor Stephen Adrianson and score composer Sean Murray. They all helped me a lot with my directorial debut. And of course I can’t thank enough my friends and co-stars Kristanna Loken, Matthias Hues, Robert Davi, Adrian Paul and Robert Madrid (who was a co-producer also) for all their support.

This was your first feature film as a director; how was the experience and do you have any plans to direct again?

It was very tough because I had to do so many things at once as a director, producer and a star. But don’t get me wrong, it was an unbelievable experience and I loved it! I tried many interesting things, for example I mixed several genres in “Black Rose”. I knew it’s dangerous but I still did it. So you’ll find action scenes in “Black Rose” but also there are mystery and even horror elements. My character is Russian Police Major Vlad Kazatov and he travels to California to help LAPD with a serial killer investigation. Vlad is definitely a fish out of water because this is his first trip to the US and as a director I used it to squeeze a couple of funny moments into “Black Rose”. I have no doubts that I will direct again in the future.

I’m a huge fan of 80’s and 90’s action classics. I was a very skinny Moscow kid but I started boxing thanks to Stallone’s “Rocky” and later switched to bodybuilding thanks to Arnold’s “Commando” and “Conan” movies. “Black Rose” is kind of ‘old fashioned’ but that was the idea! And it’s interesting you mentioned “Red Heat” because Russian and Americans were working together in Walter Hill’s film. It’s the same in “Black Rose”: a Russian cop and American detective have mutual respect. They fight together against evil, not against each other. I think it’s an important message, especially now.

You’ve got a fantastic cast; can you talk about getting them all together?

Kristanna Loken liked the script right away and signed to play LAPD profiler Emily Smith. I’m a big fan of Kristanna, she’s a great action star and an amazing actress! Robert Davi is my friend, we made a thriller called “Magic Man” together in 2009 and I was happy to work with him again. Matthias Hues inspired me with his action classics in the 90s so I created a big Moscow action scene in “Black Rose” with him in mind. Adrian Paul co-starred in my film “Moscow Heat” so I’ve known him for many years. He liked the idea of playing an LAPD tough cop in “Black Rose” as soon as he read the script for the first time. Robert Madrid is my long time friend (like Matthias and Adrian) and he co-produced several movies with me. So, again, I created a great team, surrounded myself with friends and that’s another reason why “Black Rose” was such a good experience!

It’s great to see you working with Matthias Hues; how did you guys meet?

Thank you! I met Matthias for the first time at the “Arnold Schwarzenegger Classic” Bodybuilding Championship in 1998, it was my first ever trip to the US. Later he came to Russia several times to support my free fitness seminars and free movie screenings for kids. “Black Rose” was our first film together but we made two more already (“Showdown in Manila” and “Maximum Impact”). Matthias is an iconic action star and I’m really proud to call him my friend! We’re working out together and even smoke cigars occasionally. By the way, last time we smoked together – it was with Arnold Schwarzenegger himself!

What were the most challenging moments of working on the film?

As I said, I had too many jobs on “Black Rose”. As a producer and director I was involved in almost every aspect of pre-production, production and post-production. As an actor I was in almost every scene (except the prologue). I didn’t sleep much, didn’t have time to eat properly or workout enough. But it was all worth it. And probably the real challenge was to shoot a big action scene in the beginning – with many actors, extras, police cars, guns/rocket launchers and those Jeep going right into the glass wall of the Bank building.

Would you be interested in doing a sequel? Any ideas for a story?

We spoke to Kristanna about it a couple of days ago. We don’t have any exact plans yet but she wants to do it which is great. Kazatov invited Emily to Moscow in the end of “Black Rose” so their adventures can continue in Russia. And the audience never really saw Matthias dead in the first movie so he could easily show up in the sequel too! 😉

Any word on when we’ll see Showdown in Manila and Maximum Impact in North America?

“Showdown in Manila” was released theatrically in Russia last year. Later it was sold to many countries in Cannes 2016. I think it will be released in North America this fall. “Maximum Impact” is on the final stage of post-production. It was directed by great Andrzej Bartkowiak and will be released in 2018.

Let me thank you and all Action Elite team for your support of action movies! I hope that your readers will like my directorial debut “Black Rose”!