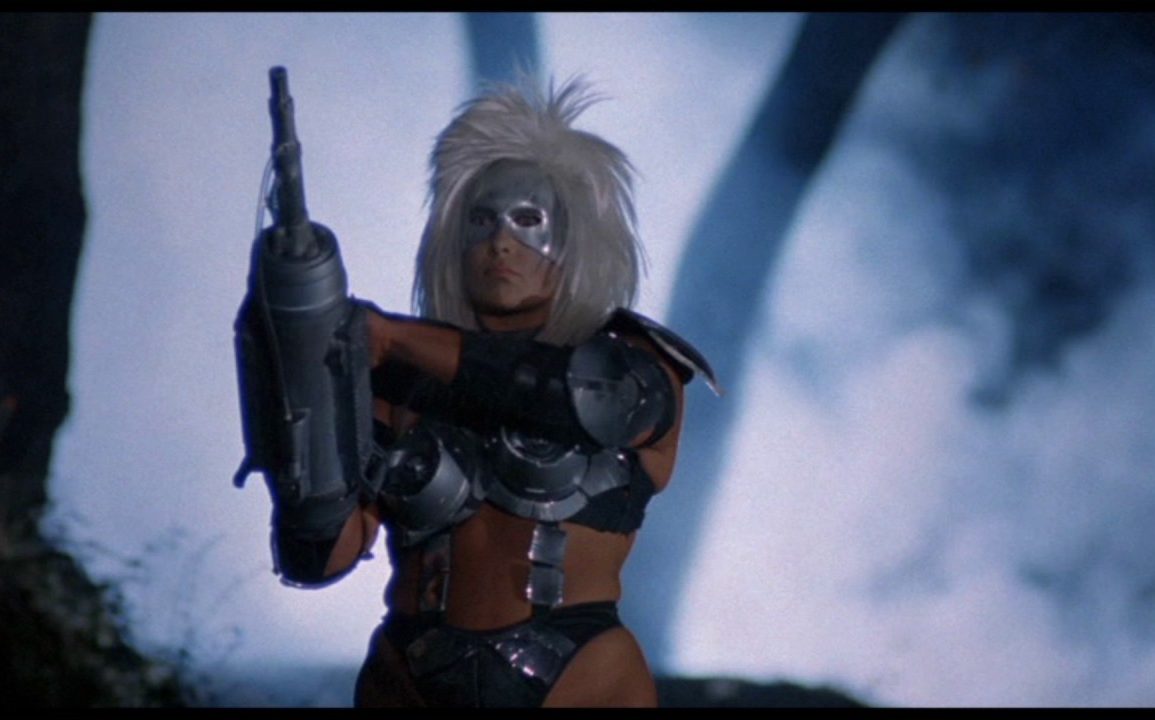 Alienator is B movie cheese at its finest with some awful effects and a hilarious villain. Definitely worth a watch while drunk.

Plot: Kol is a criminal about to be executed on a distant penal colony. He manages to escape on a shuttle and make his way to some woods in America. The commander of the prison decides to send out The Alienator to execute Kol at all costs. Kol meets up with some twenty-somethings and Ward Armstrong and together they all try not to get killed by the pursuing Woman of Death – The Alienator.

Review: I actually can’t believe this movie was from 1990; I would have thought it was around 1985 considering how cheap it looked. Alienator is a hilariously so bad, it’s good movie.

What on Earth were they thinking with the look of the Alienator? It took me a few minutes to realize it was actually a woman but the costume is just outstanding.

The whole movie looks like it has a budget of 3 dollars but like so many of these kinds of movies, that’s part of the charm. The humans are all really annoying until the cop (John Phillip Law) shows up who is pretty sympathetic. Ross Hagen plays Kol who essentially holds his neck and acts like he’s choking for most of the film.

This is a B movie at its very best with the cheapest sounding keyboard music I’ve heard in a long time but also some pretty bad effects too.

It is actually the sort of movie that should be on Mystery Science Theatre; I think that could be very entertaining with a commentary from them.

The story itself is actually not bad and it moves along at a decent pace; there’s no denying it’s a lot of fun either. Director Fred Olen Ray (Cyclone) knows the kind of movie he’s making and does the best he can with the limited budget.

Overall, Alienator is B movie cheese at its finest with some awful effects and a hilarious villain. Definitely worth a watch while drunk.