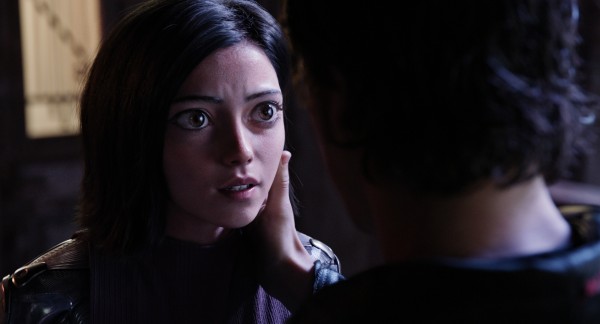 Alita: Battle Angel was far better than I anticipated with an incredibly appealing protagonist, some impressive visual effects and Christoph Waltz at his charming best. Some of the supporting cast are wasted and it has its flaws but Alita is a fun night at the movies.

Plot: Set several centuries in the future, the abandoned Alita is found in the scrapyard of Iron City by Ido, a compassionate cyber-doctor who takes the unconscious cyborg Alita to his clinic. When Alita awakens, she has no memory of who she is, nor does she have any recognition of the world she finds herself in. As Alita learns to navigate her new life and the treacherous streets of Iron City, Ido tries to shield her from her mysterious past.

Review: There hasn’t been much buzz about the upcoming release of Alita: Battle Angel and whenever I mentioned to people at work that I was seeing it last night they said they had never heard of it which possibly doesn’t bode well for its box office.

I hope Alita does find an audience though as clearly a lot of effort has gone into creating this world and is deserves to be bigger than the cult classic status that may await it. Maybe I’ll be proven wrong as this does have the name James Cameron attached to it (as writer/producer) and the film very much feels like classic Cameron rather than a Robert Rodriguez movie (who actually directed it).

Alita is at times a visually stunning and wildly imaginative action fantasy that should be seen on as large a screen as possible so you can appreciate the sense of scale which you rarely find in movies with lots of CG special effects. There are several vertigo inducing moments as characters dangle from high buildings although I didn’t really notice much in the way of 3D (I saw it in IMAX 3D) which was a surprise considering Cameron’s love affair with the technology.

When I first saw trailers for the movie I remember thinking that Alita’s eyes were just a bit too big looking and it would be distracting. I understand it’s based on the Manga and they were trying to give the character a similar look but throughout the movie I couldn’t help but be aware of it. On the flip side of that however, Alita herself is just an immediately appealing character and her wide eyed appearance works perfectly in establishing her enthusiasm for her new found life. James Cameron was always great at writing strong women without ever feeling like some tedious feminist message which is in so many movies today. Alita is strong, confident, vulnerable and lovable all at once and is one of my favourite movie heroines for some time.

The CG characters all look like (admittedly impressive) special effects so for the most part you do feel like you are watching an expensive looking videogame take place but it sure is pretty. The action is beautifully shot and it feels like an old-fashioned action adventure movie with a modern visual aesthetic. There are plenty of fight scenes which are easy on the eyes to watch with nice camera work keeping it all smooth looking.

Christoph Waltz is magnificent as always as Alita’s creator/father who tries to keep her safe from the world but her reluctance to stay put will take her towards her destiny.

Alita has an incredible supporting cast that includes Jennifer Connolly (who must have made a deal with Satan to remain as stunning as she has without ever aging), Jeff Fahey, Jai Courtney and Marko Zaror to name but a few. My only problem was a lot of them were wasted in mere cameos and we never even get to see Marko in a fight scene which is a travesty.

I must congratulate Mahershala Ali in this movie who did his best Morpheus impression and was unspeakably cool; his wardrobe is superb and if he wants to send me any of this outfits I’d happily accept them. Is that weird? OK let’s move on…

It also felt like several other movies rolled into one with elements of Blade Runner, RoboCop and more but there were enough cool ideas to make it feel fresh. Tom Holkenborg provides the score which is loud and bombastic but sadly lacks anything resembling a theme tune which once again felt like a missed opportunity but I think few people other than myself would even care.

This is a surprisingly violent PG-13 movie with people being cut in half and more but it’s all so cartoony that there’s nothing that would shock or disturb too many people.

The ending is clearly left open for a sequel (which we probably won’t get) so when the credits come up you may feel a little cheated.

There is more I would like to say but I don’t want to spoil anything so I’ll finish by saying that Alita: Battle Angel is a feast for the eyes with a wonderful protagonist who is feisty and sympathetic with some impressive action scenes and imaginative ideas. I would see it on a big screen as possible if you can so you can immerse yourself in another world for a few hours and enjoy the ride.