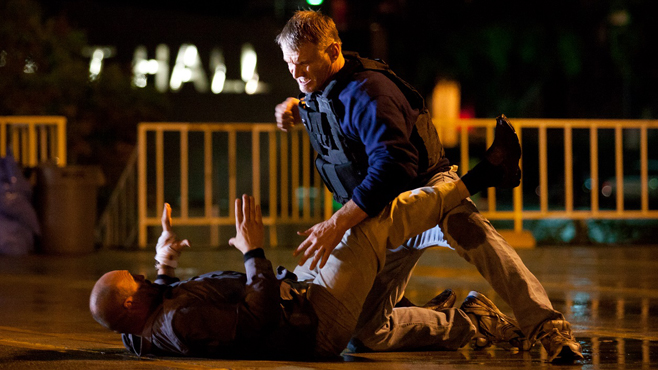 Ambushed is more of a slow-burn crime flick rather than an action movie so it may be disappointing to some but I enjoyed it and thought Dolph and Randy shone in their roles.

Plot: In the frenetic underbelly of Los Angeles, Agent Maxwell closes in on an international cocaine smuggling operation run by criminal mastermind Vincent Camastra. When Agent Beverly Royce goes undercover with the drug dealers and finds herself deeper then she can handle – the case becomes personal for Maxwell who has to combat ruthless killers and dirty cops in an all-out action filled finale to bring the criminals to justice.

Review: Pretty much everyone involved from Blood of Redemption returns for Ambushed AKA Hard Rush. I have to say I like this arrangement as it gives Dolph a chance to show how versatile he actually is.

This movie isn’t really an actioner but more of a gangster/crime saga. This may put some off as there isn’t much in the way of action. There are a few fight scenes, including a fight between Dolph and Randy Couture at the end but nothing spectacular.

It should be noted though that Dolph, Randy and Vinnie Jones only really have smaller roles and the main characters are played by Daniel Bonjour and Gianni Capaldi.

For me, Capaldi pretty much steals the movie for the simple reason that he’s a fellow Scot. It’s great to see him play a bit of a psycho in this movie but also, you like him at the same time.

It’s the kind of story where not everyone is good or evil; they all just make choices and some are better than others. I enjoyed the friendship between Frank and Eddie which gave them more depth than you’d expect.

Randy Couture is a real scumbag in this movie; he’s a corrupt cop who thinks he can easily push his way into Frank and Eddie’s business, but gets a bit of a surprise when they decline. The final 20 minutes, he just loses it and goes on a rather disturbing killing spree.

Vinnie Jones is only in about 2 or 3 scenes and doesn’t have a big role; he doesn’t even appear at the end so his character has no real point in being there.

The acting in general is better than you may expect and just because this movie doesn’t have a huge budget, doesn’t mean it’s low quality. It all ends in a pretty blood soaked tragedy, but I found it pretty satisfying.

Director Georgio Serafini can create a well told story with characters that engage and to quote Palpatine, we shall watch his career with great interest…

Overall, Ambushed is more of a slow-burn crime flick rather than an action movie so it may be disappointing to some but I enjoyed it and thought Dolph and Randy shone in their roles.