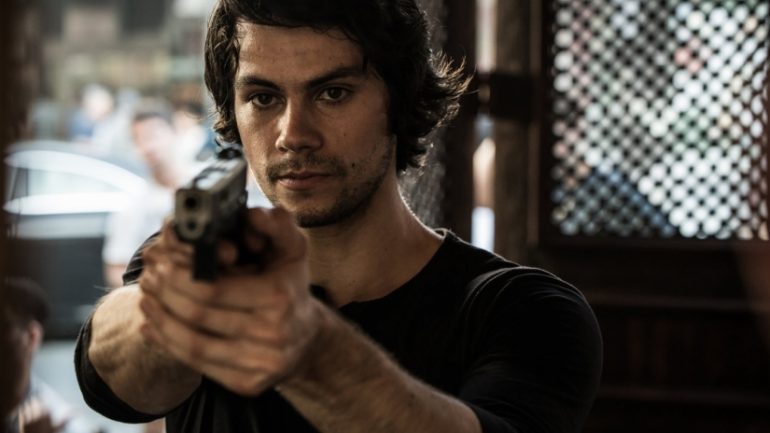 There are apparently 15 books based on the character of Mitch Rapp and if we get a future entry in the series then you can count me in.

Plot: When Cold War veteran Stan Hurley takes CIA black ops recruit Mitch Rapp under his wing, they receive an assignment to investigate a wave of random attacks on both military and civilian targets. After discovering a pattern of violence, Hurley and Rapp join forces with a lethal Turkish agent to stop a mysterious operative who wants to start a global war.

Review: American Assassin has been on my must-see list for a while mostly due to the great cast that includes Michael Keaton, Scott Adkins, Taylor Kitsch and Dylan O’Brien as our lead Mitch Rapp.

O’Brien brings surprising intensity to the character and this was a far more serious film than I was expecting before going into the theatre. Rapp is filled with rage and essentially wants to wipe out all the terrorists in the world, no matter the cost. He’s a far more interesting and angry character than Jason Bourne and after what happens to his fiancé in the opening scene you can totally get behind his crusade. It starts off with a blistering attack on a beach which hits close to home, reminding us that the threat of terrorism is all too real but it set the tone for what we can expect from the film.

It’s a tough watch at times and with all the attacks going on in the world right now it may not be the best time for the movie to be released, so I wouldn’t be surprised if it isn’t a big hit at the box office.

The supporting cast are all at the top of their game but before we get onto the awesomeness of The Keaton let’s just celebrate the decent sized role Scott Adkins gets in the movie. I thought he would only be in 1 or 2 two scenes but he gets a fight scene with O’Brien and even a few scenes with Michael Keaton too so it’s great to see him moving on to bigger, better things.

Michael Keaton is arguably the star of the show and I love how his career has had a resurgence after the success of Birdman; he’s one of the best actors in the industry today and I can watch him in anything. His character Stan Hurley is tough as nails and quite possibly a little insane but that’s what makes him so entertaining on screen. His relationship with Mitch feels authentic and you can understand his reticence at training this young man who seems a little unhinged and refuses to follow orders.

Taylor Kitsch always seemed like a nice boy but I’m now kinda scared of him as he was a wonderfully nasty villain and yet, you could almost see where he was coming from after being abandoned by his own people.

The movie is wonderfully violent too and I liked how Rapp showed no mercy to his enemies; there is a high body count and also a pretty nasty torture scene involving involuntary removal of finger nails… which is never fun.

There is plenty of well-executed action including brutal fight scenes, shoot-outs and stabbings but my favourite moment arguably was the Virtual Reality training scene; it came across as a futuristic concept but we all know the technology is very real and it gave us a different kind of training scene which really stood out.

The finale is genuinely explosive and frankly jaw-dropping which is rare in this day and age; there is CGI but it’s very well done and made for an entertaining and action-packed climax.

In terms of flaws, the story is quite generic giving us another villain who wants to set off a bomb and the heroes have to race to stop it so it doesn’t really bring anything new to redefine the genre. There is a also a little pacing lag in the middle while they are in Rome which could have maybe been tighter.

Overall, American Assassin delivered the goods and felt like a 90’s Tom Clancy film in the vein of Patriot Games with intense action and a fantastic cast with Michael Keaton stealing every scene.