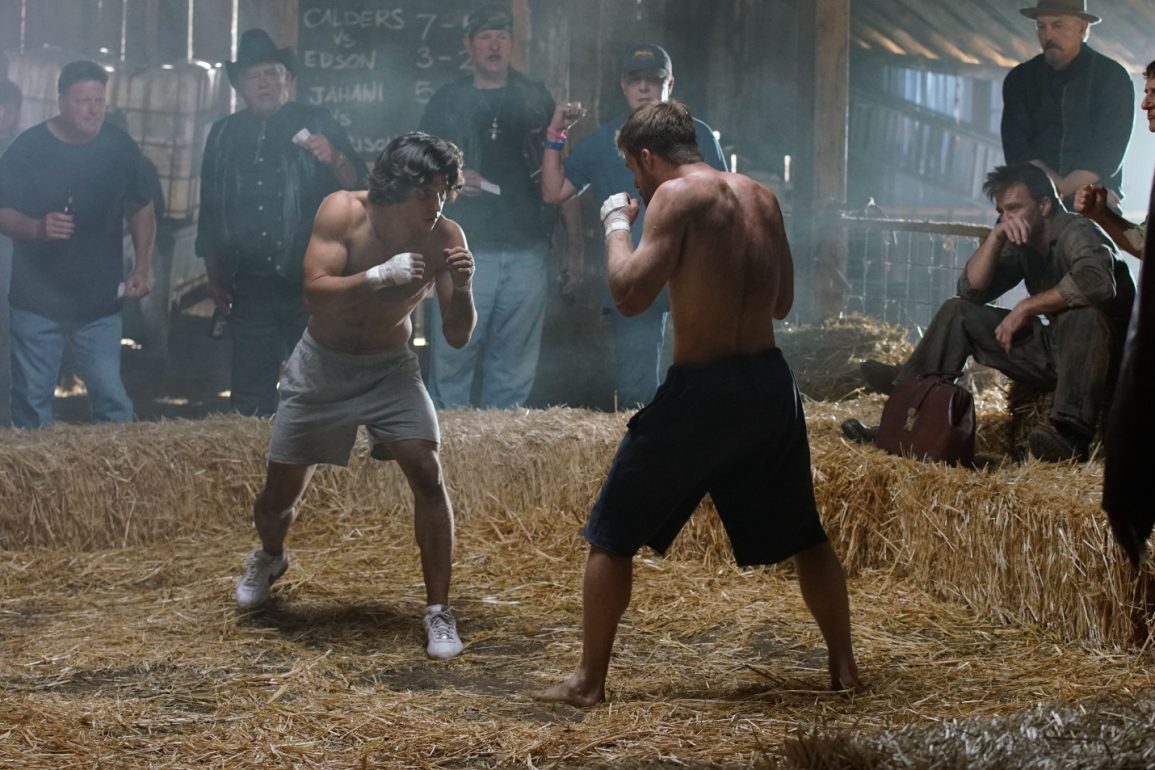 American Fighter is as formulaic as they come and it’s rather forgettable but I do enjoy these kinds of films; Sean Patrick Flanery especially makes it worth checking out.

Plot: Desperate for cash to save his deathly ill mother, college wrestler Ali (George Kosturos, American Wrestler: The Wizard) enters the hidden world of underground fighting. Ali shows promise but, lacking skills, he gets beaten bloody. Duke (Sean Patrick Flanery The Boondock Saints), a troubled handler, takes pity on the boy and trains him to be a fierce competitor—but is it enough to make Ali a winner? Based on a true story, this gritty action tale also stars Tommy Flanagan (“Sons of Anarchy”).

Review: One thing’s for certain, I’m a sucker for a good ‘ol down and dirty fight flick. Living through the 90’s and the subsequent DTV martial arts craze, I literally gobbled up any film that contained fists and feet flying for a collective 90 minutes. To make matters worse, I started my martial arts training in ’89 so by the time the video boom erupted, I was already hooked from what the 80’s had to offer. It didn’t matter if the stories were similar or if they contained the usual suspects in clichés, if it had fisticuffs in it, I was glued to the TV screen. This was before the MMA craze hit and when that premiered, my love for the subgenre grew even more.

It’s 2021 now and I must say that at the ripe old age of 48, I’m still just as much in love with fight films as I was back then. With that, here is my latest review for a little ditty aptly titled American Fighter which is somewhat questionable because the lead is Middle Eastern but I digress. I like to think that the title refers to the fact that he’s American through and through even if he wasn’t born here. After all, he’s chasing the American dream.

American Fighter is the follow up to the inspirational sports drama American Wrestler: The Wizard and with it, that film’s star George Kosturos returns as Ali, who after winning it all in the last film, is now in college on a wrestling scholarship. Things are different however as college is much bigger and way more competitive and there is unfortunately the threat of racism that Ali must endure from some of his narrow minded teammates. They call him all the names in the book but Ali is undeterred and he has one good friend in Ryan (Bryan Craig) who is the very epitome of a faithful comrade.

Ali is excited because he is finally going to see his mother and father who were still stuck in Iran but when the plane arrives, Ali learns that his father has been executed and his mother was taken off the plane and is gravely ill. Now Ali must raise $30,000 to free his mother and with that Ryan introduces him to shady fight promoter McClellen (Flanagan) who runs an illegal underground fighting circuit. Why wouldn’t there be an illegal fighting circuit in the townn where they go to college? Ali shows promise right away and his tenacity combined with his wrestling skills makes him an almost instant natural in the ring to which McClellen sees dollar signs and the sounds of cha-ching in his eyes and ears.

Working for McClellen is washed up, grizzled ex-fighter Duke, played by the always capable Sean Patrick Flanery, who offers to take Ali in and show him the tricks of the trade when Ali bites off more than he can chew and is beaten badly by a sadistic Muay Thai fighter. Did I forget to mention that Duke has a tragic past? Yep, he does. With his mother’s fate hanging in the balance, Ali trains with Duke, who is looking for a little redemption, for the rematch of his life that will leave only the man who wants it the most standing when the dust settles.

Once I started watching American Wrestler, I was reminded that these films take place in the early 80’s and that makes it rather refreshing as most MMA films these days are in the present. Back then there was no MMA to speak of but just like the film suggests, it still existed. It was just lying in wait. It just wasn’t in the public spotlight. I liked the initial film American Wrestler and thought it was a low budgeted feel good sports drama and here it is changed up as American Fighter raises the stakes and the bloodletting creating a world of deadly human cockfights. The stakes are definitely higher here both in the ring and out for Ali and there is more on the line then a simple wrestling championship.

American Fighter unfortunately falls into the fight film cliché trap as all the favorites are there. You have the good as gold hero overcoming impossible odds. The unscrupulous fight promoter who is only in it for the money. The grizzled veteran who takes our protagonist under his wing and the adoring love interest who adds romantic drama to the proceedings. You have the best friend who seriously gets hurt in a fight which adds tension to the story. You also get the standard training montages which show Ali becoming a better fighter set to 80’s music and last, you have the evil opponent who devastates Ali in a match setting the stage for a rousing rematch in the finale. Check, check and check on all counts.

It’s all here and even though I was reminded of two dozen similar movies that came before, I still found myself enjoying what this unpolished movie had to offer. First off, Kosturas makes for a likeable lead. Although his action is suspect at times, he still wins the audience over with his doe eyed persona. You can’t help but feel for Ali and the devastating situation he’s in and dammit if you’re not rooting for him before the credits roll.

Most of the supporting cast are unknowns but they still serve their purpose. Craig is likeable as Ali’s best friend Ryan and Allison Paige is just so gosh darn cute and wholesome as Ali’s stick by his side girlfriend Heidi. She doesn’t add much to the plot by hey isn’t it a law that our hero must have a supporting significant other? The tagline says it’s based on a true story so there’s that.

The real stars besides Kosturos are veteran character actors Tommy Flanagan (Max Cloud) and Sean Patrick Flanery. Flanagan plays the trust him as far as you can throw him fight promoter McClellen and even though you see his character arc coming a mile away, Flanagan still nails it and almost makes McClellen likeable at times. He’s not the worse person in the world but he isn’t the greatest either. What can I say about Flanery. He’s an actor that should be way more famous than he is and genre fans know him well and love him but he should be a more mainstream star. Flanary elevates any film he is in and just recently I saw him as the lead in Born A Champion which is a great flick about the first American Black Belt in Jiu Jitsu. That reminds me, i must do a review for that film in the near future because that film was emotional and crowd pleasing to say the least and even though he’s a supporting player here, he steals every scene that he’s in.

The real reason for watching American Fighter is the rough and tumble fight sequences choreographed by Alan Noel Vega. There’s certainly enough fight action to please the masses and for the most part, they are shot well and exciting. The editing is fast at times but you have no problem following the moves and hits of the fighters and the choreography forsakes flash for a more realistic approach which highlights the MMA aspect of the action. It’s violent but not overly violent and just brutal enough to satisfy. The film is rated R but I was left wondering why as nothing in it couldn’t be shown on network television nowadays.

Kosturos looks good in the sequences and while the first film had him wrestling and grappling, here he is given the task of performing more martial arts and MMA style moves. Kosturos definitely trained for the part and it pays off as his character of Ali is extremely believable in the film’s numerous altercations. The finale which is hyped up after Ali loses is rather brief and while I would have liked a more extended affair, it still serves up a satisfying conclusion complete with the flying kick money shot that is teased during the training scenes. After all, what’s a fight flick without “THE SHOT” at the end of the match.

Director Shaun Paul Piccinino, who also co-wrote the script with Carl Morris, keeps things moving in the movie’s 98 minute running time. The dialogue and some of the scenes radiate cheese to the extreme but it’s forgiven because I feel this is a homage to those corny flicks that came before it. Piccinino knows what type of film this is and I got a nice throwback feel to it that reminded me of the past DTV films of yesteryear. Hell, you could even call this film No Retreat No Surrender: All Bets Are Off. I just thought of that name as I was writing this by the way. The audience knows exactly how the movie is going to end and there are no surprises but dammit, you still want to take the ride if only for the battle action.

Overall, American Fighter will probably be forgettable as soon as you watch it but Kosturos’ performance, Flanery’s scene stealing brilliance and the down and gritty fight action make it a fun time while it’s on. You’ve seen a thousand of these movies before but, hey, what’s one more? If you’re a fan like me, then you can never get enough and with this entry in the endless stream of MMA infused dramas, I was entertained for 98 minutes.