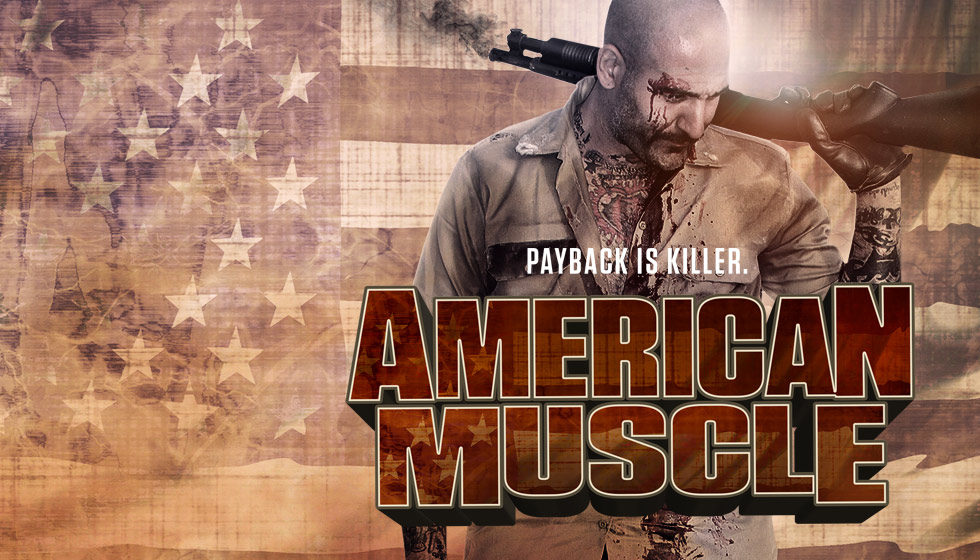 American Muscle is essentially the ultimate male fantasy movie with fast cars, naked women and exploding heads. As long as you don’t go in looking for anything too deep then you might just have a blast.

Plot: AMERICAN MUSCLE follows a recently paroled convict hell bent on revenge against those whom he holds responsible for his incarceration…including his own brother.

Review: I’ve always loved my Grindhouse/Exploitation movies so when I first saw a trailer for American Muscle I was excited as it looked like my kinda movie.

So I finally got to see it; did it live up to my lofty expectations? For the most part, yes. Sex, violence and exploding heads are the order of the day and to paraphrase Jerry Maguire: “You had me at exploding heads”. I think that was from the director’s cut…

There isn’t much in terms of story or character development, but really, it isn’t required and the film is briskly paced at a short 1 hour and 17 minutes.

Nick Principe gives a star-making turn as our anti-hero John Falcon who is out for revenge against his brother and his crew for betraying him. Falcon is one of the best badasses of the year and despite him not being all that sympathetic, you do root for him. Not sure why he’s desperately searching for his girl Darling and yet screws pretty much every female that crosses his path though…

Todd Farmer nearly owns the movie as John’s brother Sam Falcon; he’s a complete scumbag and is clearly having an absolute blast in the role as the villain.  Few people can ask the question “Why?” and sound so utterly batshit crazy.

The love interest Darling (Robin Sydney) spends the majority of the movie naked (shame) but is a totally unlikeable crack whore… literally. You wonder why Falcon would go to all this trouble for someone who clearly doesn’t deserve it, but that is sort of the point. He’s spent the past 10 years in prison focusing on the wrong thing.

The whole film feels like a trippy, sleazy trip into Hell and yet it’s actually pretty funny with some dark humour in places too.

I’m pretty sure that was CG blood in a few places though which was disappointing; it always looks fake and takes away from the impact of violence.

There’s a great selection of music on display with some choice rock tunes which once again gives it the 70’s vibe.

Anything set in the desert always gets my vote as well and considering the film’s modest budget, it looks good with all-round better performances than you’d maybe expect from a film like this.

Keep an eye out for John “The Arrow” Fallon as mute henchman Tongues who has one of the stand-out fight scenes with Falcon. He also gets his own sex scene which I’m sure must have been a terrible chore to shoot.

Overall, American Muscle is essentially the ultimate male fantasy movie with fast cars, naked women and exploding heads. As long as you don’t go in looking for anything too deep then you might just have a blast.