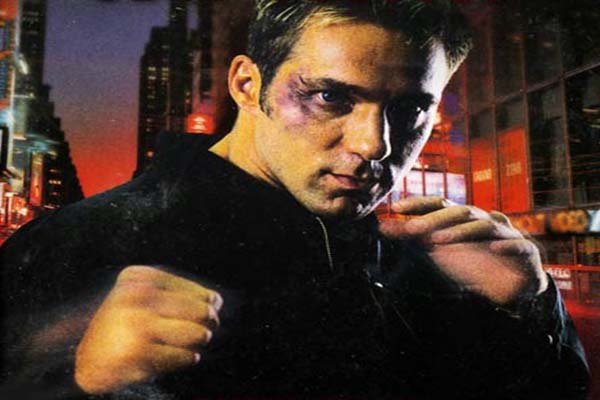 American Streetfighter is a fun B movie with Daniels doing what he does best: hurt people and it has an unpredictable story with a really daring ending.  If you’re looking for a well-acted film though then best look elsewhere.

Plot: There are battles fought in the ring, in the streets, for love and for honor….but now Jake Tanner (Gary Daniels) faces the battle of his life. To save his brother Randy (Ian Jacklin) he must make the ultimate sacrifice.

Review: Gary Daniels stars in this low budget martial arts flick from 1992, which gives us a demonstration of how impressive his martial arts prowess was/is.  He is incredibly fast and his fight scenes are always hugely enjoyable.

The character of Randy is quite an unsympathetic character who blames his brother Jake for leaving 10 years ago without knowing the full story.

What makes this movie stand out though is the fact that Jake would do anything for his brother so he says that he will fight instead of him. But then the surprising thing happens and despite his skills, Jake keeps getting his ass kicked. He isn’t the all-conquering hero but very flawed and not as good as he thinks he is.

The villain Ogawa (Gerald Okamura) is pretty nasty too and just uses people for his own sinister motives.

The story is quite unpredictable and even has the balls to have a downbeat ending; if you haven’t seen the movie then look away now.

OK, now that we’re alone; by the end of the movie you expect Jake to save Randy and they all live happily ever after. Nope; Randy is suffocated with a plastic bag in from of Jake and he is forced to watch his brother die. Wow, I did not see that coming so they deserve props for being so daring.

The acting in general is pretty bad but that’s always part of the fun of these 90’s B Movies; we aren’t looking for Oscar fare, just asses being kicked.

It should be noted that there is also some gratuitous nudity which gets the movie an extra star from me. See? Isn’t this the kinda stuff critics should be looking for in movies? Violence and bewbs. Sold!

Overall, American Streetfighter is a fun B movie with Daniels doing what he does best: hurt people and it has an unpredictable story with a really daring ending.  If you’re looking for a well-acted film though then best look elsewhere.