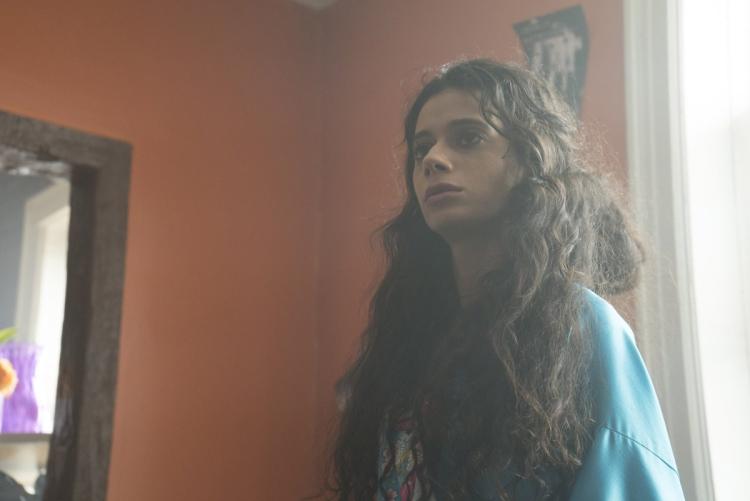 Angelic Zambrana stars alongside Dave Bautista and Brittany Snow in the upcoming action thriller Bushwick; it tells the story of a military force invading a Brooklyn neighborhood, so 20-year-old Lucy and war veteran Stupe must depend on each other to survive.

Angelic stops by to chat about her role and how real life is starting to mimic events in the film.

Your new movie Bushwick is very much a tale for our times; what appealed about it to you?

At the time we never thought things would head in this direction; I thought the premise was interesting but we actually shot it back in 2015 and the directors thought of it five years before that. They said it was from an interview with Gov. Rick Perry where he said that if Obama got reelected he would pull Texas out of the United States. So they went off that premise and created the story of Bushwick.

I deliberately avoided watching any trailers before viewing Bushwick and it’s amazing to go into a film blind and watch this nightmare unfold in front of you.

That’s the only way to watch movies!

What can you tell us about your character Belinda?

Well, Belinda is a mess; you could say she’s representative of one of those people who’s not really in tune with what is going on politically in the world. She’s very self-indulgent in her own emotions and she has her own vices. She likes to party, she doesn’t like feeling bad emotions and she’s generally a bit of a wreck. All of a sudden she’s thrown into this war which she didn’t even know was taking place; she managed to stay in her apartment without even knowing there’s war going on. She thought it was her neighbour playing Call of Duty. It appealed to me because it kind of reminded me of a friend of mine (laughs) but not in a bad way.

Yeah, I love how all the characters have their own arcs and journeys to go through; Belinda starts off wallowing in her own problems in her apartment, hungover and passed out on her couch. Then she is forced to sober up, discipline herself and there’s this giant political awareness that happens within quick rapid-fire moments. She’s the least likely person that would survive in a war.

I would love to see what happens to Belinda after the events of Bushwick, would that interest you?

Belinda will obviously never be the same after this; she’s not necessarily crazy. She’s one of those people who has emotional trauma which makes them have extreme reactions to things. You probably know people like this; they are just extra sometimes. They’re not crazy but they make you feel uneasy sometimes and that’s what Belinda is like. If someone was judgmental they would say she is crazy but she’s just had emotional trauma and when she’s thrown into this war she reaches breaking point. I imagine the character either wakes up and becomes an adult or she’s not going to be well emotionally where she could have some very bad emotionally disturbed problems. She’s sensitive to stimulation, Belinda.

Did you spend a lot of time behind the scenes with Brittany Snow to build a rapport with her?

She’s really cool and super professional, Brittany. It was great to be around her and act with her. I remember we were shooting this big scene with a truck rushing through a park. She was singing Whitney Houston while holding a gun while we were waiting for the next camera role. So she’s a lot of fun but she’s really professional. She actually got hurt at one point. There’s a scene where she has to run up to a car and she sets the alarm off. She gave her all and she seriously bruised her wrist. I also got hurt thankfully at the end of the movie (laughs) where I hurt my ankle really hard.

What was the toughest day?

I think it was the last scene when we are trying to make it to the helicopters because we shot it to look like it was one continuous take. That scene went from high adrenaline with us shooting our guns with bombs exploding. Then I get hit and there’s this big emotional moment at the end so normally something like this would be done over the course of a day rather than during one take. It was almost like the theatre where we had to have everything going and running. That was when I hurt my ankle because I decided to wear heels on the movie… which wasn’t the best idea (laughs) because that’s what Belinda would do. So that was tough it but was still a dream because I’ve always wanted to do action movies.

It’s getting even scarier; I have CNN on my phone and I saw headlines about what was going on in Charlottesville and I was being torn apart. It was making my heart race because we don’t want what’s going on in Bushwick to actually happen. There’s a point in the story where we get to a church; it doesn’t let up and it’s so messy. It made me feel sad when I watched it at first; you take aside what’s happening in real life and it’s just a cool movie. But it’s filled with an element of sadness due to everything that’s happening now as we hope this isn’t what’s going to happen in the near future. It’s supposed to be a concept movie with some cool action and it still is but it has that element of sadness when you watch what’s happening in our country right now.

Was this the first time you’ve trained with a gun?

It’s funny but I’ve shot a gun for different movies but never actually trained; it works for my characters because the majority of them (like Belinda) have never shot a gun before so I didn’t want it to look like she knew how to shoot a gun.

Watching the movie I was thinking “this could easily happen”; if it did how do you think you would react?

Well, I’m not the type of person who’s quite as self-indulgent in my own emotions as Belinda (laughs) but I think I’d become like Tomb Raider or something to protect my family. At least that’s what I would hope. I have a very interesting thing when I get scared where I get quiet; I grew up in New York City and come into encounters before and I shocked my little self as to how I reacted where I don’t cry until that person goes away (laughs). Maybe I am a badass after all…

I thought the use of sound was very important in the film and really helped to create a nightmarish atmosphere; sometimes it’s what you don’t see helps the imagination. Did you find that?

Yeah, they did a great job; the set decorator and the art department were really great. We smoked up like every block that we were on while we were shooting and we saw some people Tweeting about how they thought a war was going on and didn’t know it was a movie. There were smoke bombs everywhere so you could probably see where we were shooting from a satellite in space. When faced with that with acting you are faced with creating that energy within yourself of fear to get the adrenaline going.

The gun training I’m doing is for a proof of concept; another dystopian theme and another movie called Currency about the crash of the bank system in America. I’m also doing a new show called Big Dog which comes out next year which is America gong into another depression after another financial crisis.

(laughs) I know! I think artists must be inspired by the fear they actually feel about what’s happening in the country.

Can you make a movie where I win a billion dollars so that can come true?

Bushwick will be released August 25th.