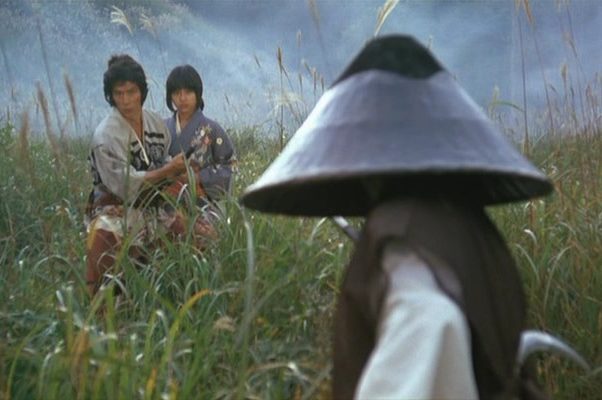 There are no words for how awesomely bonkers this movie is; it’s like a surreal dream with lashings of over the top bloodshed and hilariously unconvincing decapitations. I love it!

The story is as follows: A fortuneteller prophesizes that whoever marries the beautiful Ukio will become the ruler of the world. Naturally, this makes her very popular with those vying for power, particularly the insatiably greedy Lord Donjo. Only the ninja Jotaro can stop Donjo’s plan, but to do so, he must first battle the deadly team of “Devil Monks” serving the lord. Will Jotaro succeed in his mission? And if so, will Ukio marry him, thus making him the ruler of the world?

I’ll be honest and say by the end of this movie I pretty much lost the plot of what’s going on and just enjoy the madness. It all gets quite overly complicated as the devil monks swap heads of various women for the evil Donjo so he can win the heart of Ukio but then it goes off in all kinds of frankly bemusing directions.

Jotaro (Hiroyuki Sanada) is the incorruptible hero who is willing to sacrifice anything to get revenge for the rape and murder of his love Kagaribi. Hiroyuki Sanada is one of the most underrated actors out there as he always had a magnetic presence on screen. He makes Jotaro incredibly sympathetic and you want him to take on all comers with ruthless efficiency… which he rightly does.

The devil monks are straight out of Big Trouble in Little China where the hats cover their faces, giving off an otherworldly feel to the crazy black magic-fueled action.

Of course their are fountains of blood and wirework galore planting this firmly in the realms of fantasy so for once the wires didn’t piss me off.

I still have no idea what happens at the end but by that stage I’d pretty much stopped caring and was just enjoying the ride.

If you haven’t seen this movie you should seek it out as it is totally batshit crazy but a complete riot that needs to be seen.