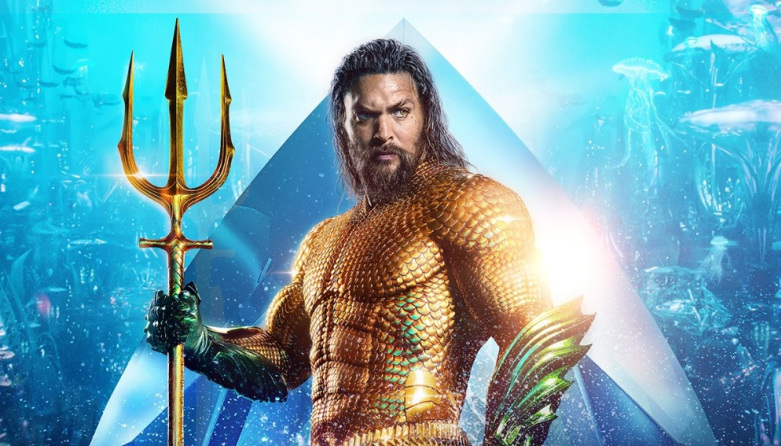 Aquaman may be silly and the script is far from stellar however, it’s harmless fun with stunning visuals and plenty of action. Jason Momoa also proves he has the chops to be an A-list star and yes ladies he spends a lot of the movie without a shirt on.

Plot: Once home to the most advanced civilization on Earth, the city of Atlantis is now an underwater kingdom ruled by the power-hungry King Orm. With a vast army at his disposal, Orm plans to conquer the remaining oceanic people — and then the surface world. Standing in his way is Aquaman, Orm’s half-human, half-Atlantean brother and true heir to the throne. With help from royal counselor Vulko, Aquaman must retrieve the legendary Trident of Atlan and embrace his destiny as protector of the deep.

Review: Aquaman has always been seen as one of the lamer superheroes (to the general public at least) but despite the Justice League movie’s failings I thought Jason Momoa succeeded in making the character seem surprisingly badass and dare I say it, cool.

As the cast list was announced for Aquaman I’ve (not very) secretly been looking forward to seeing it for several months mostly due to the addition of Dolph Lundgren to the project. Director James Wan said in a recent interview that he has been a fan of Dolph for many years and especially enjoyed him in the otherwise forgettable Johnny Mnemonic.

Dolph has more screen time than I anticipated in Aquaman and I loved every moment seeing him on the big screen once again where he belongs.

I could tell from the first trailers that having Wan at the helm could steer the DC ship back on course after the disappointing Justice League. It certainly appears to be the case as Aquaman has opened worldwide to a whopping $200 million and it’s not even on full release yet in North America.

Superhero movies have all been rather serious lately and have forgotten how to be good old fashioned fun but thankfully Aquaman has put the “hero” back in superhero. Jason Momoa may not be the most amazing thespian on the planet but he brings a rugged coolness and easygoing charm to Aquaman (while remaining badass) which hearkens back to the glory days of 80’s action cinema. When Arthur AKA Aquaman makes his heroic entrance we get pounding electric guitars and a soaring music score as he fights a submarine full of goons taking great pleasure in smashing them into walls, doors and anything else that will cause physical harm. I knew from that moment on that this was a movie I was going to enjoy and for the most part it was wonderfully escapist fun.

It is one of the most colourful and imaginative movies I’ve seen for a long time with some truly incredible visuals; Arthur and Mera swimming with a lit flare through a swarm of creatures was my favourite shot of the movie. James Wan knows how to use his cameras and with every action scene we can see what’s going on clearly but he also isn’t afraid to shoot from strange angles. I loved how several action scenes begin suddenly while characters are mid-conversation but are interrupted by an explosion or gunfire and it just created a feeling of chaos and excitement where we almost feel like we are in the thick of it with them.

Very few critics ever mention the music score when discussing movies but it’s something I always listen out for and Aquaman has one of the most triumphant music scores I’ve heard for some time. Even if the past DCEU films haven’t been amazing the one thing they have over Marvel is the music which is always innovative and exciting. Although the score was truly epic I found the use of songs during the movie jarring at times and there’s a scene in the desert with “comedy” music which I’ve always hated.

In terms of flaws the biggest issue the film has is the script which rarely hits the mark and there are few lines that you’ll remember after watching; maybe it’s the 40 year old man in me but when one of the CG characters said “We the fish men…” I burst out laughing. I’m not much of a comic book guy to be honest so it all just got a little too ludicrous for me.

I also thought Yahya Abdul-Mateen II wasn’t the right choice as Black Manta; he wasn’t awful but it should have been Michael Jai White who I remember wanted the role when the film was first announced. I think his deep voice and fighting skills could have made the character work a little better. He is at least not a one note character and I hope we get to see him in future Suicide Squad movies.

James Wan favourite Patrick Wilson chews the scenery as the main villain King Orm and there is nothing subtle about his performance but that describes the movie in general; it’s big, loud and massively entertaining even with its flaws. The stunning Amber Heard has more to do as Mera than I expected as she guides Arthur on his quest to prevent a war while also expounding exposition to move to the next scene.

Overall, Aquaman may be quite baffling to non-comic fans (like myself) but it’s a visually stunning and ambitious super hero epic with plenty of imaginative action scenes and a charismatic lead in Jason Momoa. It is a vast improvement over Justice League and is the best Aquaman movie we could possibly get.