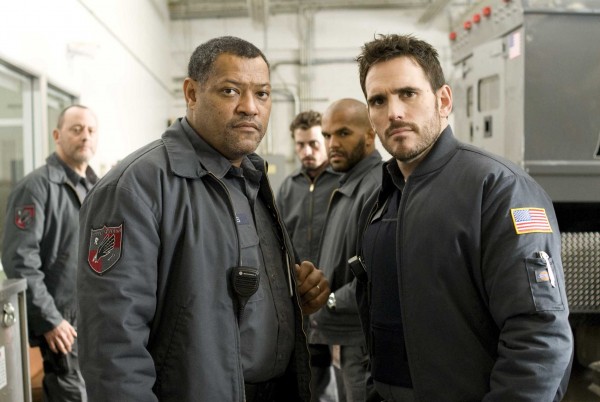 Plot: A newbie guard for an armored truck company is coerced by his veteran coworkers to steal a truck containing $42 million. But a wrinkle in their supposedly foolproof plan divides the group, leading to a potentially deadly resolution.

If ever there’s a movie that was a wasted opportunity it was Armored; an amazing cast that includes Jean Reno, Matt Dillon and Laurence Fishburne in a rather bland and formulaic action thriller.

Despite only running at 88 minutes it actually takes a while to get going but this movie lost me with the ridiculous opening sequence which ends up being the most unlikely practical joke of all time. It was so frustrating and unrealistic that I couldn’t really get into the rest of the movie.

Once the main story kicks in it does get a little tense but not exactly edge of your seat, mostly because you don’t really care about anyone. Columbus Short does the best with what he’s given as our hero Ty and so do the rest of the cast but no one has anything memorable to say or do. I found that Ty kept making dumb decisions and too often his actions stretched credibility.

I couldn’t quote a single line of dialogue either and after 5 minutes I’d pretty much forgotten about the movie entirely.

It’s not a total failure though; Matt Dillon and Laurence Fishburne are decent bad guys, especially Fishburne who is quite unhinged even from the start.

Jean Reno doesn’t really have anything to do which was a real disappointment as he is one of my favourite actors.

I liked Skeet Ulrich’s character as he didn’t go quite the way you’d expect.

The action is well executed and surprisingly violent for a PG-13 rating but there isn’t anything really thrilling that you’ll think about after watching.

Overall, Armored doesn’t have much to recommend it aside from the solid cast; the story is by the numbers and you don’t really are what happens to anyone, so why bother?