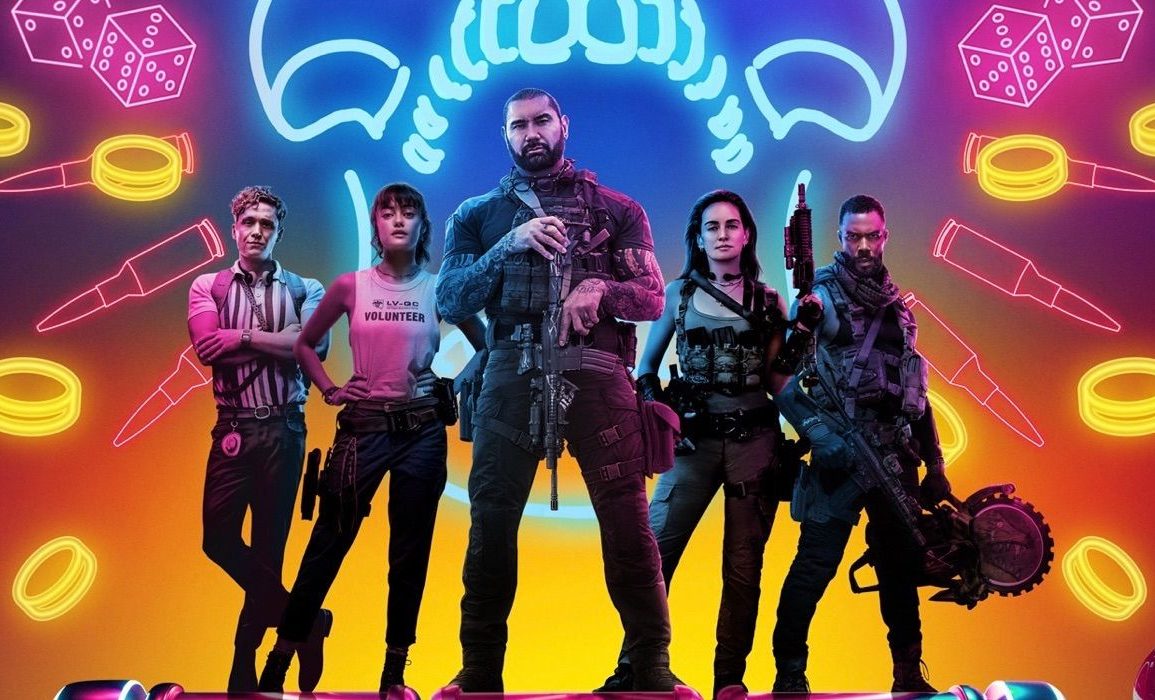 Army of the Dead takes too long to get where it’s going but Dave Bautista makes for a sympathetic hero and there is some witty banter in-between the zombie slaying action to make it worth checking out on Netflix this weekend.

Plot: Following a zombie outbreak in Las Vegas, a group of mercenaries take the ultimate gamble, venturing into the quarantine zone to pull off the greatest heist ever attempted.

Review: Now that Zack Snyder is done with his rather po-faced foray into the DCEU he moves back into (mostly) lighter fare with Army of the Dead. His remake of Dawn of the Dead was surprisingly enjoyable and although this movie never reaches the heights of Dawn it is still a good time.

Dave Bautista plays Scott Ward, a man who survived a battle with some zombies and is still dealing with a trauma (which I won’t spoil here) but it has put a wedge between him and his daughter Kate (Ella Purnell). He agrees to commit a heist in what is left of Las Vegas after a plague of zombies has made it uninhabitable. A friend of Kate’s went into Vegas and never came back so she decides to come with Scott and his ragtag crew to see if she can still rescue her. I found Kate particularly obnoxious and I couldn’t stand her as a character; I know that was part of her arc but I was hoping she would be killed off before the end.

What ensues is some father/daughter drama, lots of zombie killing and a rather enjoyable cast who you know won’t make it to see the credits but that’s always part of the fun with these movies.

Dave Bautista isn’t your typical action star; he looks huge and intimidating but he is soft spoken and rarely plays an unstoppable hero which makes him relatable. I find him arguably more interesting an actor than Dwayne Johnson and he owns every moment of this movie giving it some much needed heart.

I also enjoyed Omari Hardwick as Vanderohe and Dieter (Matthias Schweighöfer) had a few enjoyable moments even if he felt like he was pulled from a Michael Bay film.

As with the majority of Snyder movies Army of the Dead goes on for far too long and he really should try to reign himself in occasionally just to see if he can make a movie that is under 2 hours long again. Both 300 and Dawn of the Dead came under 2 hours and are better than this film which feels like a patchwork of other better movies.

There is plenty of zombie killing action as well as gruesome kills which was the biggest plus point for Army of the Dead; there were also some interesting ideas like the hibernating zombies scene which was one of the few creepy set-pieces of the entire movie. I also thought the idea of zombies being able to feel grief was fresh. It’s hard to do anything new with the zombie genre but Army of the Dead has its moments (the zombie tiger was awesome) and the concept of a heist during a zombie apocalypse is something different. It doesn’t take itself too seriously (at least in the first half) and it is genuinely funny at times with a few choice lines of dialogue.

There is of course some social commentary particularly about everything the world has gone through over the past year like quarantining, talk of building walls, etc. and if there wasn’t any commentary then is it even a zombie movie? Snyder himself has said “I felt like to really do the genre correctly, social commentary is at its heart and at its roots” which he is correct about.

As you’d expect the film looks fantastic and the visual effects are generally impressive (despite the odd CG explosion) and Junkie XL’s score is well suited to the on-screen carnage.

It isn’t anything we haven’t seen before (I say that a lot recently) but there are enough fresh ideas to make Army of the Dead worth checking out.

Overall, Army of the Dead may not reinvent the genre but it has oodles of zombie killing action and gruesome deaths to keep fans happy. It didn’t need to be as long as it is but it’s never boring and the generally light tone keeps things moving.