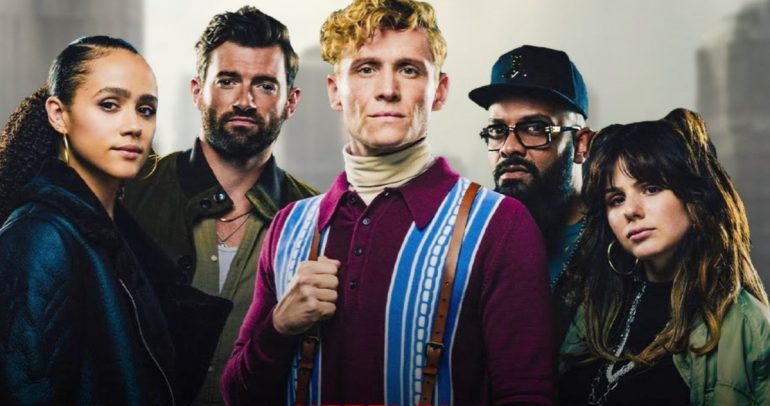 Army of Thieves was better than I expected with a fun story that connects nicely with Army of the Dead. It takes a while for any action to take place but the characters are entertaining and it was an enjoyable distraction from reality.

Plot: A prequel, set before the events of Army of the Dead, which focuses on German safecracker Ludwig Dieter leading a group of aspiring thieves on a top secret heist during the early stages of the zombie apocalypse.

Review: I rewatched Army of the Dead this morning to refresh my memory before watching the newly released Netflix prequel Army of Thieves. I’m glad I did as I needed a refresher on the character of Dieter (Matthias Schweighöfer who also directed this movie) who had provided many of the laughs in Army of the Dead as the safecracker. Army of Thieves explores his backstory and it’s a worthy addition to the “Dead-verse” which is a new word I just made up.

The character of Dieter is quite a pathetic soul and feels very familiar; he has a lonely existence making YouTube videos about cracking safes but he has no views or followers, spends his days working at a bank getting shouted at by the public then eating his lunch alone. When Gwendoline (Nathalie Emmanuel) shows up and offers him an opportunity to join her crew as their safecracker he is terrified but excited at the same time for this potentially exciting new adventure.

He meets the gang led by Brad Cage (Stuart Martin), a man who is obsessed with old-school action movies and sees himself as an action hero. He even watched Con Air growing up which made him who he is today… but is he really such a good guy? Ruby O. Fee was immensely appealing as Korina who is the hacker of the group and then we have Rolph who at first is wary of Dieter but soon bonds with him. Aside from Brad they are a likeable bunch and I particularly loved Gwendoline who was vulnerable, smart and a total badass at the same time. She gets to have a few fight scenes and I liked how her relationship with Dieter grew.

Aside from being able to crack safes Deiter himself is quite useless spending most of the movie screaming like a girl (like he did in Army of the Dead) but Matthias Schweighöfer still makes him sympathetic. The idea of 4 safes based around Wagner’s Ringcycle is an interesting concept but also provides a connection to Army of the Dead. The safe in Vegas is called Götterdämmerung which is the fourth one and by the end of this film we have a greater understanding of why Dieter is so eager to join them.

It takes a good while for any action to happen but I found myself really into the story and Dieter’s journey; he’s the kind of character I would normally find annoying but for some reason he doesn’t bother me and I just laughed.

Hans Zimmer and Steve Mazzaro provide the score and we also get some Wagner too who Zimmer has regularly homaged in his music it works well for this tale even if I likely wouldn’t listen to it outside of the movie.

In terms of action there are some fights and chases and the heist scenes are rather tense; there isn’t much but it’s still a really fun ride.

Overall, Army of Thieves was far better than I anticipated with Dieter proving a more interesting character than I was expecting giving us the right amount of laughs and the movie has some exciting heist scenes. It’s hardly classic stuff but it’s an enjoyable one-time watch.