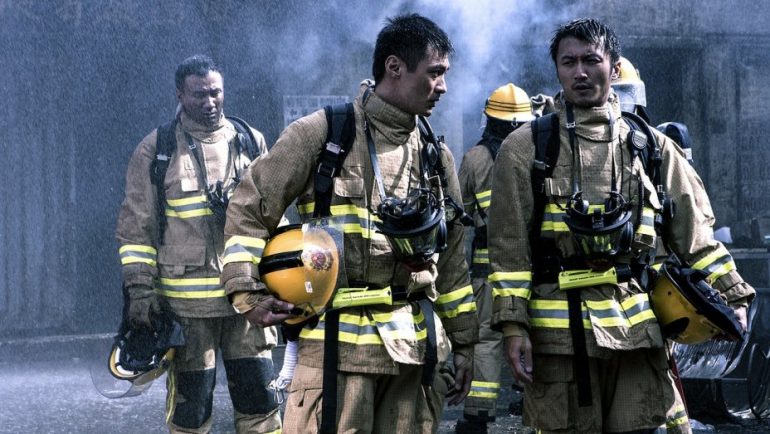 As the Light Goes Out is a thoroughly entertaining Hong Kong disaster flick with plenty of thrills.

Plot: The firefighters of Hong Kong’s Pillar Point division battle an out-of-control blaze that threatens to plunge the city into darkness.

Review: As the Light Goes Out isn’t exactly a name that rolls off the tongue but aside from that the film is an incredibly effective and entertaining disaster flick.

At first I thought it was going to be a Hong Kong version of Backdraft but it’s suitably different with well fleshed out characters and some spectacular action sequences.

There isn’t any fighting or shoot-outs, it really is just a disaster movie but it’s incredibly well executed and the cast are all on top form.

Simon Yam is always worth watching but this is very much an ensemble piece that explores the brotherhood of firefighters and what happens when loyalties are truly tested.

It does go on a little long but it’s quite gripping and the story and characters were interesting enough to keep me fully engaged from beginning to end.

The names got a little confusing at times; I mean one guy is called Ocean and another is called Water so you have to make sure you don’t get distracted for a moment.

There is a little too much CG smoke at times which is more annoying than anything else and takes away some of the realism.

I enjoyed the cameo from Jackie Chan which is one of the highlights of the film and keep your eyes open for a Wai-keung Lau cameo too.

The second half of the movie has some tension filled set-pieces with a suitably explodey climax as well although a certain sacrifice you see coming from a mile off.

Overall, As the Light Goes Out is a thoroughly entertaining Hong Kong disaster flick with plenty of thrills.