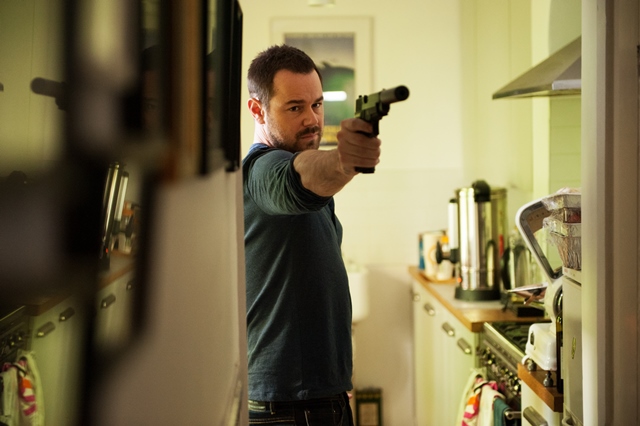 Plot: Ruthless killer for hire (Danny Dyer) breaks the rules of his profession and falls for a beautiful young woman. Discovering the notorious gangland brothers (Martin & Gary Kemp) had hired him to kill her father, his world breaks down and he must turn against his criminal employers and their gang to save the woman he loves.

Review: Assassin is the new actioner from Danny Dyer where he plays yep; you guessed it, an assassin. Story wise this isn’t anything new; an assassin who is the best in the business meets a girl who helps him rediscover his humanity… his employers don’t like this, etc…

I’ve enjoyed Danny Dyer’s past few movies and Vendetta was an old-school 70’s style revenge flick so I was looking forward to checking out Assassin. Although not as hardcore, this movie is still quite entertaining with Dyer being very restrained and saying little.

His character Jamie is suitably ruthless but this is a movie that belongs to Gary & Martin Kemp who play two gangsters that like to remove anyone that gets in their way of building a new nightclub.

Martin Kemp is suitably menacing and you know right from the start that this is a man who can’t be trusted.

Although the story isn’t really anything new, there are a few moments that I didn’t see coming and at 75 minutes, it’s fast paced and never dull.

My biggest problem with the movie was the character Chloe; I found her incredibly unsympathetic and I didn’t see why Jamie would want to go to such lengths to save her life. Her friend was also rather annoying and their acting wasn’t the greatest either.

There are no real thrills to the action, making it not all that memorable but there are a few stylish moments from director J.K. Amalou who does the best with what they have.

I liked how the story ended though and it felt like a fitting conclusion which was pretty satisfying.

Overall, Assassin is the same old hitman movie we’ve seen a million times before but the Kemp brothers are suitably nasty and it’s well paced so if there’s nothing else on then maybe give it a rental.