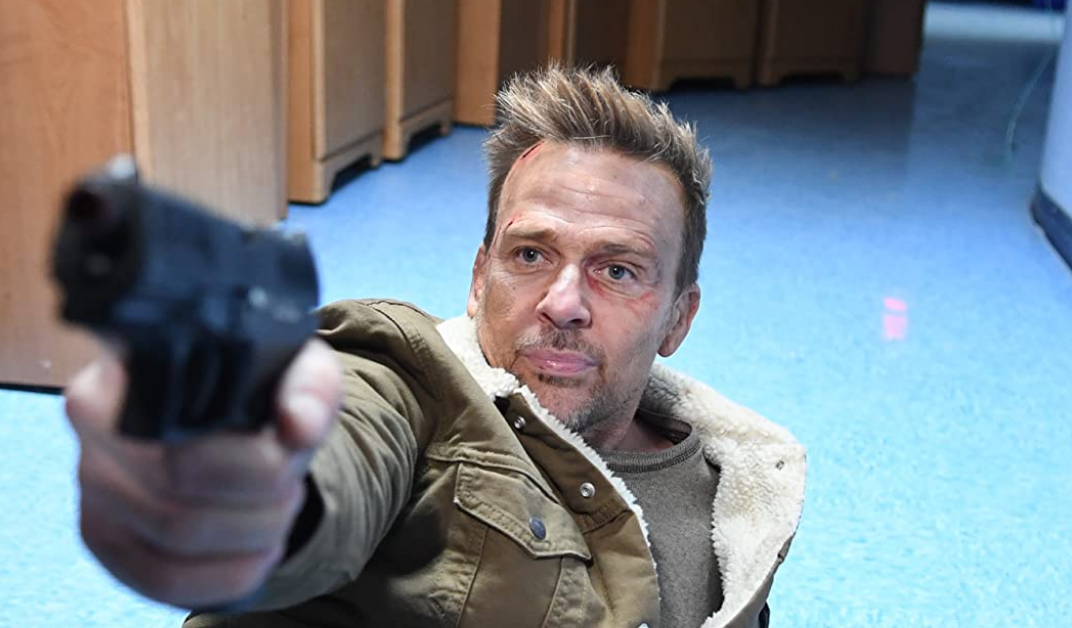 Assault on VA-33 is a missed opportunity with Michael Jai White getting no action scenes, Mark Dacascos being underused and no characters aside from Sean Patrick Flanery’s being remotely sympathetic. It looks cheap and the only decent scene is a fight with Dacascos and Flanery but it doesn’t make up for having to sit through the rest of it.

Plot: Decorated veteran and PTSD sufferer, Jason Hill (Flanery) meets his wife, Jennifer, for lunch at the Veteran’s Affairs hospital where she works. After Jennifer is called away for an emergency consultation with the head of US Military’s Joint Chiefs of Staff, the hospital is taken hostage by heavily armed terrorists. Jason becomes the last line of defense and must battle the terrorists and his own PTSD induced demons to save his wife, the General, the hospital’s staff and patients.

Review: I really wanted to like Assault on VA-33 as the cast alone features Sean Patrick Flanery, Michael Jai White and Mark Dacascos so you’d be forgiven for thinking this was going to be a kick ass action movie.

MJW doesn’t get any action scenes so there is no reason for him to be there; Mark Dacascos only has a small role but he does at least have a fight scene with Flanery which is one of the few highlights of this movie. Mark should have been the main villain as then it might have been a little more interesting however, considering the budget looks like it was under $10 then I doubt that would save it.

Weston Cage Coppola (Nic Cage’s son) plays the main villain Adrian Rabikov who has a wonky accent and is holding the VA people hostage as he wants his brother freed.

Rob Van Dam is also in it but spends the entire movie sitting in a van; I still don’t understand why the guys randomly talk about the music bands which feels so forced and painfully unfunny.

Flanery does the best with what he’s given and makes for a sympathetic lead even if the PTSD thing has been done to death.

Everything looks cheap in this movie from the CG blood and explosions to the editing where certain scenes go on for far too long making the 90-minute runtime feel longer than it is. In the past I usually would give it some slack as the film is low budget but then I wondered why? If a film isn’t good then don’t try to make excuses for it.

Assault on VA-33 is a cross between Assault on Precinct 13 and Die Hard but obviously not as entertaining as either with terribly realised characters. Flanery’s daughter is annoying, the receptionists in the VA are all rude with nobody feeling like a real person so why should we care if terrorists kill them all?

When there are so many other, better action movies with similar storylines it’s hard to recommend this to anyone other than fans of the actors or B movies in general.

Overall, Assault on VA-33 is a big disappointment as the potential was there with that cast but they are all wasted in cheap action scenes with zero thrills. The only highlight was a fight between Sean Patrick Flanery and Mark Dacascos but I’m afraid I’ll have to recommend avoiding this one. Watch Die Hard or Assault on Precinct 13 again instead.