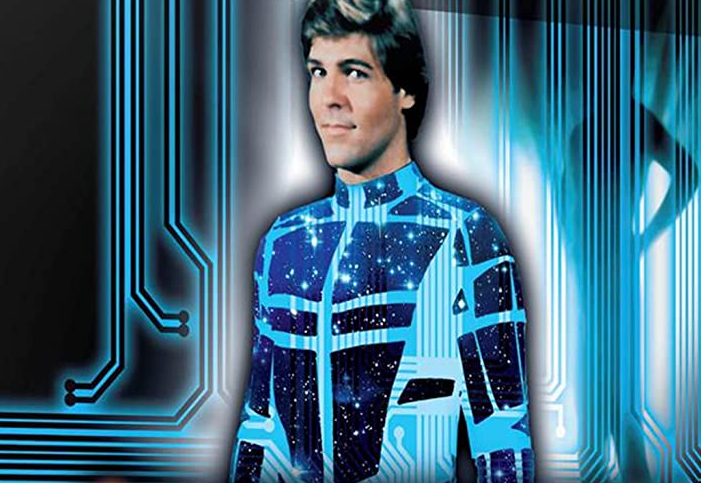 Automan is pure 80’s greatness with an appealing cast, regular action and some funny lines. Chuck Wagner deserved to be a bigger star as he was magnetic on screen and I’m glad this series has been getting more love these days. If you didn’t grow up in the 80’s then don’t bother as this isn’t for you but it’s a wonderful piece of nostalgia.

Plot: I AM AUTOMAN. Walter Nebicher is the police department’s resident computer geek… his immediate superiors think Walter’s place is behind the desk and not on the streets. However, Walter has other ideas. Walter’s expertise in computer programming is unparalleled and he creates a special program, “Automan, “, an artificially intelligent computer hologram that looks real, sounds real and given enough power can physically exist in the real world. Together, Walter and Automan along with Cursor, a small floating droid that creates any object Automan needs to, battle crime on the city streets.

Review: Hello Walter… I remember watching Automan way back in the 80’s and despite very much being a product of the time I still adore the show. It just has that pure 80’s charm and sense of fun with the only goal of entertaining. From the producers of TRON Automan is filled with neon visuals and awesome vehicles like the auto car, auto helicopter, auto bike and my personal favourite the auto plane.

The cast knew exactly the kind of show they were making, essentially a superhero comedy with action and the character of Automan (Chuck Wagner) is one of my favourites of the 80’s. He is the best kind of friend who is always there when his creator Walter (Desi Arnaz Jr.) needs him but also likes to have a good time making him essentially an extension of Walter who is more nerdy.

Desi Arnaz Jr. makes Walter believably geeky and has a good brain although sometimes, I think he can be a bit of a dick to Auto; even holograms need to party every now and again, Wally.

Chuck Wagner was perfectly cast as Auto towering over the rest of the cast (mostly due to his 4-inch heels) and he has great chemistry with Walter. The two fight crimes with Auto usually disguising himself as an FBI agent sent to help Walter investigate. They also get help from Roxanne Caldwell (Heather McNair) who is Walter’s love interest but also a good cop in her own right.

I felt like Robert Lansing was a little underused as Jack Curtis who is seen as the best cop in L.A. but Lansing was still ideal in the role giving off a slightly world weary gruffness but also having a kind heart.

Gerald S. O’Loughlin is hilarious as the grumpy Captain E. G. Boyd who constantly gets Walter’s name wrong, and he looks like he’s trying not to laugh a lot of the time.

The series only lasted 13 episodes but it still managed to get in some impressive guest stars like Patrick MacNee and Doug McClure for the pilot and then in later episodes we got Richard Lynch, John Vernon, Clu Gulager, Billy Drago and more. The episode Renegade Run featuring Richard Lynch and Billy Drago is one of my favourites as it’s nice to see Drago not playing a villain. The absolute best episode is The Biggest Game in Town which feels like a precursor (Cursor? The autocar!) to Die Hard 2 with a group of disgruntled gamers who hold the city for ransom including the airport threatening to crash planes if their demands are not met.

It never gets overly serious and keeps the tone light with the odd excruciatingly corny moment; at the end of the show it usually ends with a Police Squad style scene with the cast all forcefully laughing at something not especially funny but it’s hard not to smile along with it.

In terms of action we get regular chases, explosions and even fist fights; Walter sometimes knows martial arts and other times seems to get his ass kicked but Auto is never far away to save the day.

Cursor is the little light ball that helps Auto create his illusions and also loves the ladies as all the best holograms do.

I miss when TV shows had catchy theme tunes and Automan has one of those earworm tunes that sticks with you.

Shout! Factory released a DVD set of the full series a few years back and it has a great documentary called ‘Calling Automan’ featuring interviews with the cast talking about how they did the special effects and the fun they had making the show. I would love to interview Chuck Wagner someday as he seems really cool and I would just talk about this show for hours.

Overall, Automan is just 80’s greatness with an infectious sense of fun, likeable cast and a lot of the humour still holds up. Obviously it’s all very dated now and some of the effects look quaint but if like me you grew up in that era then this is still an entertainingly silly show. As I am going through an endless 80’s show phase right now stay tuned for my review of Manimal and Airwolf soon…