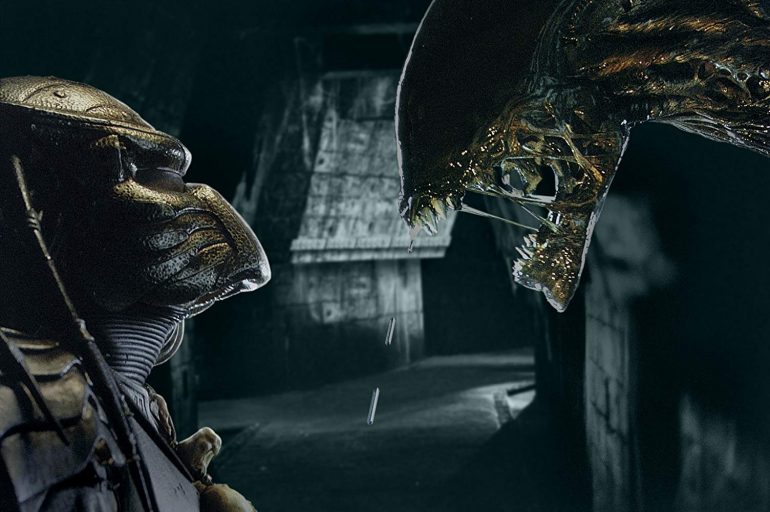 Although not the worst film of all time, AVP is probably the most disappointing crossover as it should have been great but ended up being merely quite fun and far too safe.

Plot: During an archaeological expedition on Bouvetøya Island in Antarctica, a team of archaeologists and other scientists find themselves caught up in a battle between the two legends. Soon, the team realize that only one species can win.

Review: If ever there was a crossover that should have been awesome, it’s Alien vs. Predator; it’s hardly rocket science either. What do we want to see? Aliens fighting Predators with lots of blood and maybe throw in a few marines for good measure.

What we get is a mildly diverting family friendly movie with human characters that are so utterly uninteresting that you won’t care what happens to any of them and there isn’t even any memorable dialogue either. The original Predator has countless quotable lines but this doesn’t even have one; when they try to quote Arnie’s classic line from Predator it ends up being watered down and thus loses any impact or even a wry smile.

You know the scene I’m talking about; when confronted by an alien towards the end Sanaa Lathan says “you’re one ugly mother–” and it cuts away. If you’re going to reference a line from Predator then at least do it properly! It reminded me of the theatrical version of Live Free or Die Hard when they neutered McClane’s iconic line.

The biggest mistake was watering the movie down to a PG-13 rating; I know this is a tired argument but for this movie it’s totally apt. They took away one of the main selling points of the movie: gore. The Alien and Predator movies had tons of violence but this sad attempt doesn’t have any blood to talk about.

It’s not a total loss though and has a few things going for it; the visual effects are pretty flawless with the Alien Queen looking better than ever. I really enjoyed the climactic fight between the Queen and Predator which is almost worth sitting through the rest of the movie.

Although cheesy, I kinda liked how the Predator teamed up with Sanaa at the end in order to take down the greater threat.

You’ve also got Lance Henriksen in a key role which is a nice connection to the other movies and Sanna Lathan is quite likeable, if bland.

The first fight between a Predator and Alien is quite cool and it’s fun to see these two monsters on screen together. There is some impressive set design too and the transforming pyramid was an interesting idea.

As stated above though, you don’t care about any of the characters which removes any tension or sense of threat; nobody feels like a real person and you’re just counting down until they are killed… usually off screen.

The score is also disappointing and the weakest of the entire Alien/Predator franchises; it doesn’t use any of the themes previously introduced and is utterly forgettable.

Overall, although not the worst film of all time, it’s probably the most disappointing crossover as it should have been great but ended up being merely quite fun and far too safe.