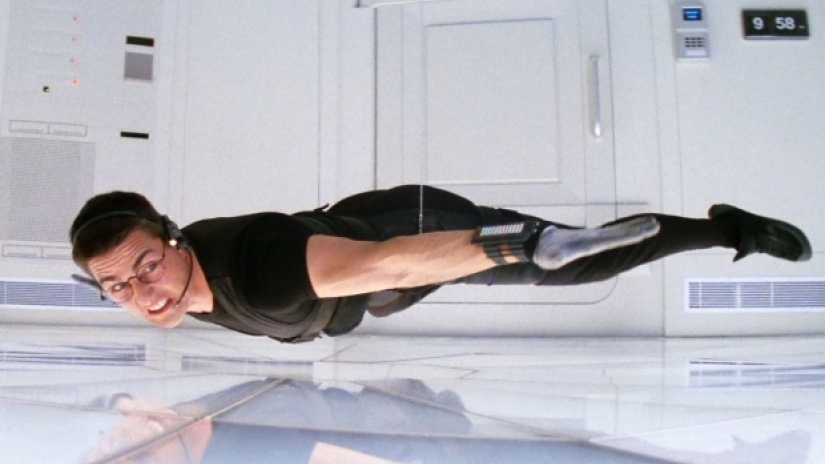 It’s only a few weeks until Tom Cruise is back in action as super spy Ethan Hunt in Mission: Impossible – Fallout which is looking rather awesome. The M:I franchise is known for it’s high octane action scenes and stunts performed by Cruise himself so let’s take a quick look at some of the most jaw dropping moments from Mission: Impossible 1-5.

The first Mission: Impossible movie feels the most like the original TV series however, I think two most memorable visual moments of the Brian DePalma directed movie are as follows:

The iconic “Close Call” sequence where Ethan Hunt is lowered by cables into a high security room protected by lasers and many other booby traps. It’s the perfect exercise in tension and few moments in other spy movies have managed to live up to it since.

The High-speed Train Ride is one of of craziest action scenes of the series and despite being one of the few moments that uses noticeable greenscreen it is still a shot of adrenaline and the way the classic theme tune is used is awesome.

John Woo took over directing duties for Mission: Impossible II and it’s arguably seen as the weakest by most people (although I’ll admit it’s actually my favourite) but there is no denying that it has a visual flair different from any other entries in the series. It feels more like a John Woo action flick rather than an espionage movie but that’s just fine by me as there are several standout moments.

The Rock Climbing scene was the first of the series which showed Tom Cruise doing something rather crazy in the opening as he actually climbed those cliffs; he is attached by a cable but it still looks fantastic and was a standout moment for the series.

The climactic chase with Cruise riding a motorcycle (mostly in slow motion) and shooting bad guys with Hans Zimmer’s electric guitar flavoured update of the M:I theme tune may well be my favourite scene of the series.

The final fight between Hunt and villain Sean Ambrose (Dougray Scott) is the most brutal of the franchise and apparently Dougray actually punched Cruise for real. Kudos.

The third entry had J.J. Abrams take over and for me this is my least favourite of the series (sorry Helen Gynell) with very little that’s really memorable; I think in terms of set-pieces it has to be the bridge assault and Cruise sliding down the glass roof of a building.

I think I’ve only watched this movie once so I maybe need to revisit it but were there any other memorable scenes?

Brad Bird helms the fourth entry Ghost Protocol which is arguably the most spectacular to date with the now iconic Burj Khalifa which I think may well be the franchise’s best action sequence. It is genuinely vertigo inducing and the fact that real life action hero Tom Cruise actually did it for real is all the more awesome.

The sandstorm is another great chase sequence and I also must tip my hat to the fight for the briefcase scene at the end between Hunt and the film’s villain Kurt Hendricks (Michael Nyqvist) is also pretty spectacular.

The Kremlin exploding was another stunning sequence and the lead up to it using the hologram was brilliantly tense with a dash of humour too.

Rogue Nation had Chris McQuarrie in the director’s chair and it has the best opening scene of the franchise with Cruise actually hanging on to the side of a plane as it took off.

To be honest I don’t think the rest of the movie quite lived up to that amazing sequence but it’s still awesome with standout moments including a motorcycle chase, a race against time under water and a high tension scene at the Opera… OK that’s actually quite a few awesome moments.

So those are some of the many action highlights from the Mission: Impossible franchise thus far; Fallout looks like it’s going to be the most ae inspiring entry yet and the addition of Henry Cavill to the cats is an added bonus.