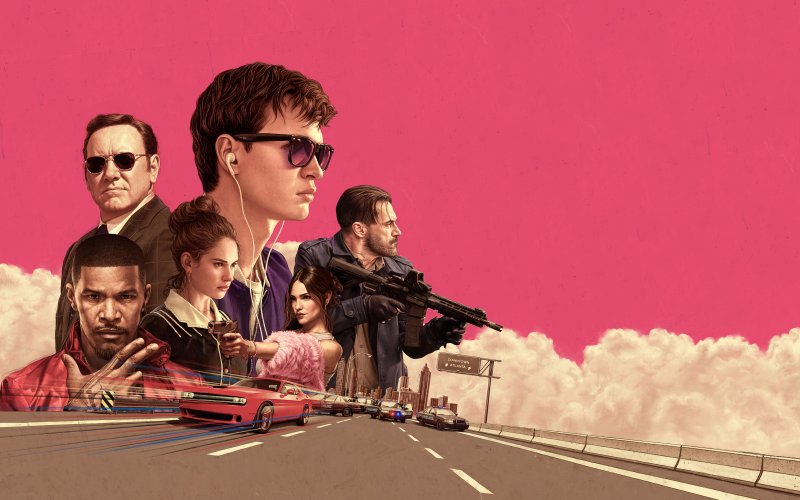 Baby Driver was a fun throwback to movies like Bullitt but never quite reaches those lofty heights.

Plot: Talented getaway driver Baby (Ansel Elgort) relies on the beat of his personal soundtrack to be the best in the game. After meeting the woman (Lily James) of his dreams, he sees a chance to ditch his shady lifestyle and make a clean break. Coerced into working for a crime boss (Kevin Spacey), Baby must face the music as a doomed heist threatens his life, love and freedom.

Review: I know I’m a little late to the party with this review but it’s been a crazy week. Anyway, critics have been wetting themselves about Edgar Wright’s latest feature describing it as the “best film of the year”. Well, it isn’t but it is still a highly entertaining throwback to classic car movies like Bullitt.

During the first half hour I thought I was going to hate Baby Driver; whenever our protagonist Baby (Ansel… he’s so hot right now) starts dancing down the street listening to music I nearly walked out. I’d heard beforehand that it almost felt like a musical which it definitely did and in case you didn’t know I am firmly of the opinion that watching musicals should be punishment for shoplifting.

Thankfully, it was really only for one scene and it established that our protagonist requires music to escape from the world, including his tinnitus which he got after a car crash when he was younger. The whole listening to an iPod to drown out the ringing in his ears concept was a quirky idea even though it kind of came across like trying too hard to be cool, but I quickly got into it and just enjoyed the music and frankly superb driving scenes.

It took me a while to actually take to Baby as a character but despite never really feeling like he came across like a real person as the story progressed I was firmly rooting for him and wanted him out of that way of life even more than he did.

I was expecting this to be more of a comedy but despite a select few moments of hilarity it was Edgar Wright’s most serious film to date and especially in the second half it gets quite tense. All the action is nicely shot and you can see everything as it happens so there’s no shaky cam to ruin things.

From the trailers I thought Jon Bernthal was one of the main characters but he’s really only in the opening sequence then we never hear from him again which was a shame. He was really just there to provide some foreshadowing for later events in the story. We did at least get plenty of Jon Hamm who is one of my favourite actors and I think he pretty much stole the movie; his character Buddy is mysterious but really cool and likable (at first) but there’s a much darker side underneath.

I’m not normally a fan of Jamie Foxx but he played a convincing psychopath who really enjoys hurting/killing people; every second he is on screen you are waiting for him to explode and it’s definitely one of his best roles to date.

Lily James was just adorable as Debora who was the purest character and essentially Baby’s redemption and ticket to a better life. Things are never that simple though and their blooming relationship is destined to cause problems down the line.

Kevin Spacey as always eats up the screen and he’s so good at being quietly terrifying; he can have this smugness one second and then within seconds he can say something, quietly making him really threatening.

It’s nice to see Edgar Wright do something a little different from Hot Fuzz and Shaun of the Dead (which are two of my favourite movies) and Baby Driver is proof that he should be doing more in the action genre. It’s not quite the life changing event critics have been swooning over but I’d be lying if I said I didn’t enjoy it.

Overall, Baby Driver was a fun throwback to movies like Bullitt but never quite reaches those lofty heights; the driving scenes are superb and the cast are all at the top of their game so I recommend seeing this on the big screen so you can enjoy a killer playlist.