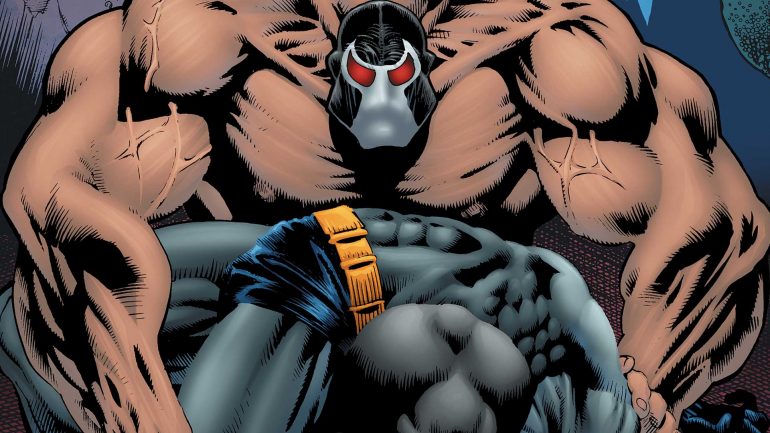 Knightfall is a classic Batman story with Bane at his monstrous best; it would have been cooler if The Dark Knight Rises used more of this storyline.

Plot: The inmates of Arkham Asylum have broken free and Batman must push himself to the limits to re-apprehend the Joker, Poison Ivy, the Riddler, Killer Croc and more. Pushed to the limits, he comes face-to-face against the monstrosity known as Bane, who delivers a crippling blow destined to change the Caped Crusader forever!

Review: Knightfall is regarded as one of the all-time great Batman stories and rightly so; it is a genuinely epic tale of The Dark Knight coming up against one of his deadliest foes: Bane.

Now, as much as I enjoyed The Dark Knight Rises I can’t help but wonder how cool it would have been if it had used more from this storyline. Yes, it used a fair amount from this story but the one thing I love about Knightfall is Batman being truly pushed to his limits physically and mentally.

When the inevitable confrontation arises between Batsy and Bane, it is a battle for the ages. I can’t help thinking Bane is a bit of a cheating bastard though; by releasing all of Arkham’s inmates to test Batman’s metal, he isn’t fighting him at full strength. Before Bane, Batman has to face The Joker, Scarecrow and a whole rogues gallery so by the time they meet, he is already exhausted.

When the Batman is broken in that iconic moment, he is paralyzed for many months. How will Gotham continue without its hero? Sorry Bruce, but it’s Jean-Paul Valley’s turn to don the cape and cowl; he’s a lot more brutal and goes that extra mile that Bruce would never go to.

Robin has his doubts about Jean-Paul due to his brutal crime fighting methods but it’s difficult to argue with his methods. In fact, Robin is actually a whiny little bitch in this story and really should be pimp slapped out of the way.

It takes Jean-Paul to create a whole new Bat-suit to finally bring down Bane but he does it in a massive battle in Gotham. They fight on trains, buildings and smash everything up good and proper.

I would have loved to see Azrael/Jean-Paul  in TDKR to take up Bruce’s mantle while he was out of action as it really adds a whole new dynamic to the story. Anyone can be the Batman was always one of the themes of The Dark Knight trilogy, after all. It’s understandable though why he wasn’t brought into the story as it would have had too many characters, especially with Azrael’s back-story.

There is plenty of action with Batman fighting nearly all of his enemies and seeing him getting truly defeated remains one of the most shocking comic book stories, which is why it’s also riveting.

Overall, if you’re a fan of Batman and felt TDKR short changed the character then this is essential stuff; now on to Volume Two…