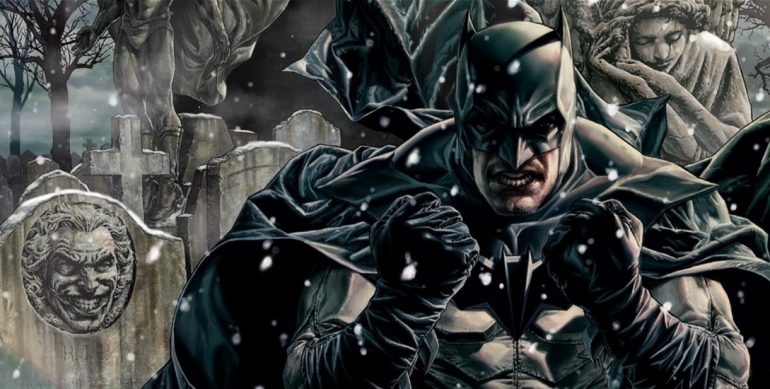 Batman: Noël is The Dark Knight at his best and is the perfect update of A Christmas Carol.

Plot: Batman: Noël is based on Charles Dickens’ classic novel A Christmas Carol and features characters from both Dickens and the Batman mythos. Like Joker, the story is narrated by one of the Clown Prince’s henchmen.

Review: Well, ‘tis the season and all that so what better way to celebrate the festive season than a review of the graphic novel ‘Batman: Noël’?

I’m kinda new to the world of comics but over the past few months I’ve become a bit of an obsessed Batman fan so I thought I’d start doing some reviews for my favourites.

Batman: Noël grabbed my attention because I heard that Ben Affleck’s costume for Batman vs. Superman will be based on this design and I have to say that I approve. The Bat-Costume is black and grey and I can pretty much imagine exactly what it’s going to look like.

The story is a Batman-themed version of the classic Dickens’ tale A Christmas Carol told ingeniously with Batman seen as Scrooge and Bob Crachit seen as a desperate criminal forced to work for The Joker to help his son ‘Tiny’ Tim. It’s illustrated by Lee Bermejo, who previously did the artwork for ‘Joker’, which remains my all time favourite comic.

It’s genuinely beautiful, creating an otherworldly looking Gotham that looks like it’s set in the Victorian era. The Gothic visuals suit Batman perfectly as we all know, so I’m surprised no one has come up with this concept before.

The Dark Knight himself is at his meanest in this story as he has no pity for Bob’s plight, despite his desperate circumstances. As far as Batsy is concerned it’s all black and white: If you break the law you’re going down, no matter what.

He even gets a visit from the Man of Steel himself, who comes to show Batman the error of his ways.

However, after the Clown Prince of Crime comes along, Batman has a change of heart and saves the day, providing Bob and Tim with a real future.

The Joker himself is terrifying, looking just like he did in ‘Joker’ and he reminds me of Heath Ledger’s Joker from The Dark Knight. A more grounded version but still utterly insane.

Frankly, the only flaw I had with this story is that it was too short. It could have been 300 pages and I’d have loved every second.

Like ‘Joker’ I will be reading ‘Batman: Noël’ repeatedly over the coming months and years and if you’re a Batman fan then it’s pretty much essential to add to the collection.