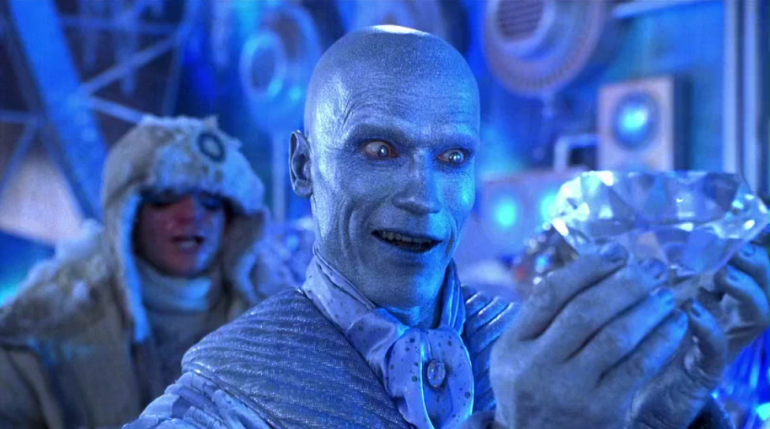 Batman & Robin as every bit as bad as everyone says, but with the right amount of beer you may enjoy it. Definitely one for the kiddies.

Plot: Batman & Robin try to keep their relationship together even as they must stop Mr. Freeze and Poison Ivy from freezing Gotham City.

Review: I like to think of myself as pretty lenient when it comes to movies, but there really are very few redeeming features to this movie; the script, acting and practically everything else is appalling.

Any movie which has the line “He’s still inside you Victor, buried deep beneath the snow” as a piece of genuine dialogue then you know you’re in for a bad night. How could anyone write that and think it was good dialogue?

George Clooney is the worst Batman ever for this simple reason: “everyone is tired of the same old, woe is me Batman”. He says this in several interviews on the DVD. Yeah, actually pretty sure nobody said that at all George; by the way, good job on disguising your voice in no way whatsoever as Batman.

Uma Thurman gives a career worst performance as Poison Ivy as well: “Just what I had in mind” the way that line is delivered makes me cringe every time; it’s not that the line is bad, it’s the delivery.

Arnie is… well he’s Arnie; he delivers bad one-liners and is basically the same as always, but even by Arnie standards the one-liners are cringe-worthy.

Alicia Silverstone is hot but even she can’t save her character’s dialogue which is horrendous.

Director Joel Schumacher said in interviews that the studio wanted to sell toys so they skewed the movie entirely towards a younger audience; Job done. There is very little to appeal to fans of Burton’s Batman films and this is just an outright pantomime.

I suppose there’s a case of so bad it’s good and some of the visuals are very comic bookish but this is taking Batman right back to 60s style camp. It killed the franchise until 2005, when some guy called Nolan came along…

Overall, Batman & Robin as every bit as bad as everyone says, but with the right amount of beer you may enjoy it. Definitely one for the kiddies.