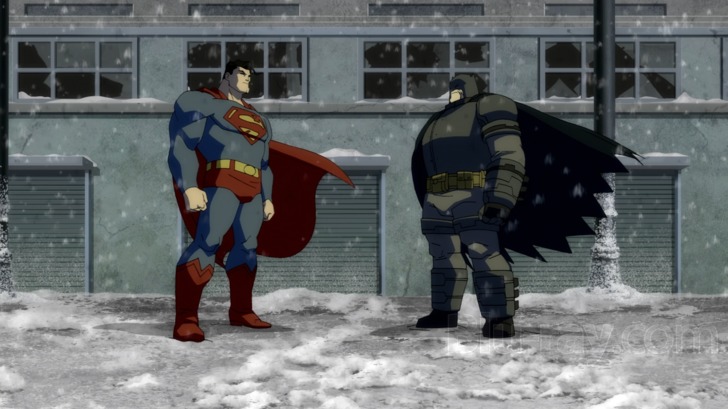 Batman: The Dark Knight Returns: Part II is a superlative Batman movie and delivers all the action and drama you’d want. Essential.

Plot: The Batman has returned after a 10-year absence. The Gotham authorities want to arrest him. An old foe wants a reunion. The Feds want the Man of Tomorrow to put a stop to him.

Review: I really enjoyed the first part of this story but Part II is arguably one of the best ever Batman films. Period. It is actually rather similar to the Dark Knight Rises in some ways, story wise except this has a climactic battle between Batman & Superman.

I would give anything to see that in a live action movie, but for some reason I doubt we’ll see it; I still don’t believe we’ll even see the Justice League either.

Anyway, this was a fantastic film and not one for the kiddies; it’s one of the most most violent Batman movies too. The Joker murdered hundreds of people in it; the most shocking scene is in a Tunnel of Love where he just keeps shooting people.

Michael Emerson is fantastic in Person of Interest although he’s one of the weaker Jokers; Mark Hamill did it better. He still does a good job though, he just seems a little too calm.

Peter Weller does a great Batman voice and I love seeing an older Batman and Green Arrow teaming up in the finale. Great stuff.

The music is excellent and reminiscent of Hans Zimmer’s work on Nolan’s Bat movies. It’s suitably different with a really cool main theme.

There is loads of action, so if you though The Dark Knight Rises had too much talking then you’ll love this.

Overall, Batman: The Dark Knight Returns: Part II is a superlative Batman movie and delivers all the action and drama you’d want. Essential.