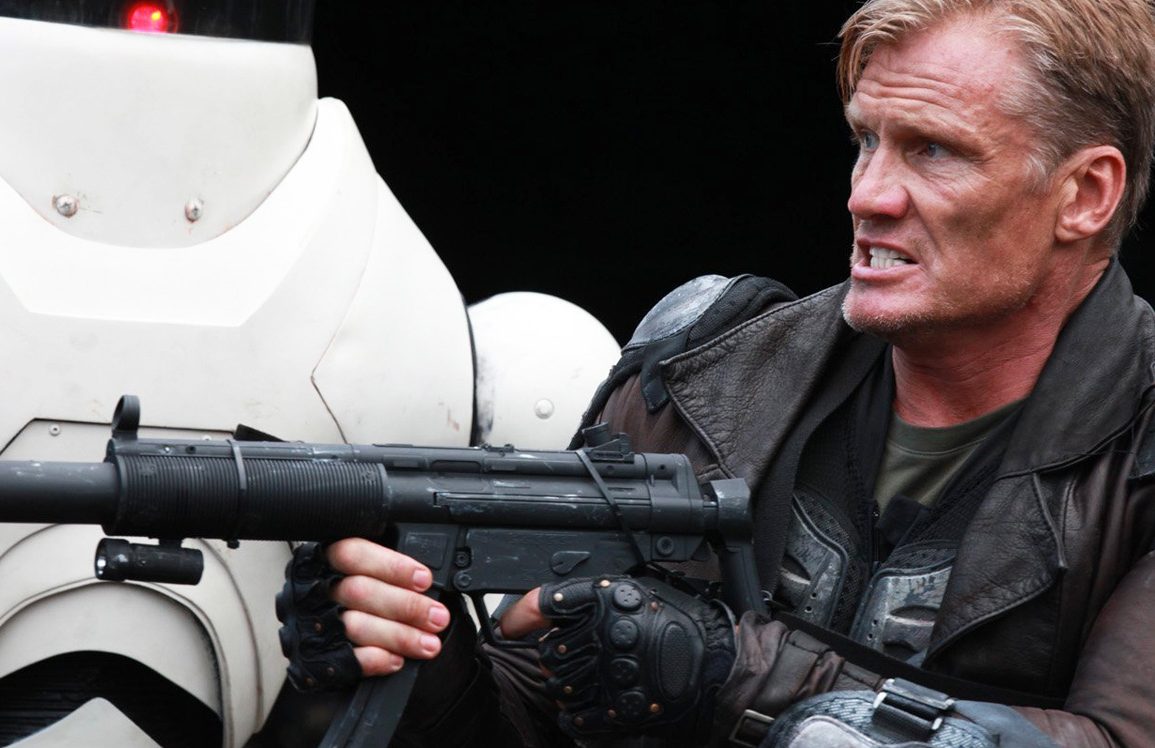 Battle of the Damned is a disappointing film with terribly shot action scenes but it’s redeemed by Dolph’s awesome badass and the odd one-liner. It’s a shame because the idea of robots vs. zombies is cool, but the execution just didn’t live up to it.

Plot: Following a deadly viral outbreak, private military soldier Max Gatling leads a handful of survivors and a ragtag band of robots against an army of the infected.

Review: Dolph is back in one of the craziest movies of his career; he plays the awesomely named Max Gatling which is arguably one of his best roles. He’s a complete military badass who always has a toothpick hanging from his mouth and rarely says anything. When he’s sent to rescue a tycoon’s daughter from a zombie infected city, all Hell breaks loose… literally.

Gatling teams up with a rag tag group of survivors as they try to find a way out of the city; so far, so standard zombie movie, right? Then the robots come in. You’re expecting there to be some wicked action scenes involving robots vs. zombies and we do indeed get action. But guess what? Yes, our old friend is back: Shaky Cam; the blight of the modern action movie utterly ruins every action scene in Battle of the Damned. For the love of God, why won’t film-makers listen? SHAKY CAM SUCKS! STOP DOING IT!

You can’t see any of the action without getting motion sickness and it ruins what could have been a pretty fun movie.

The effects are pretty average but considering the film’s modest budget I didn’t really mind the dodgy CGI. Mind you, Roel Reine had budget restraints on the Death Race movies and they still have amazing action scenes.

The acting and script are actually alright and the cast keep straight faces despite the ridiculous (yet awesome) concept. Matt Doran hasn’t aged a day since Home & Away and The Matrix; he’s probably the most likable of the supporting cast and brings a little heart to proceedings.

I liked the design of the robots which look remarkably like the robots from Robotropolis, but considering director Christopher Hatton made Robotropolis then we can let that slide.

The music was moody and provided the right atmosphere for the story so no complaints there.

Overall, Battle of the Damned is a disappointing film with terribly shot action scenes but it’s redeemed by Dolph’s awesome badass and the odd one-liner. It’s a shame because the idea of robots vs. zombies is cool, but the execution just didn’t live up to it.