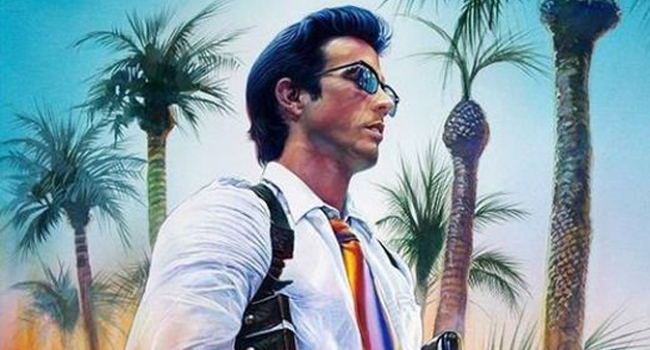 I sometimes forget that Michael Mann’s Heat was a remake of a movie he made 6 years earlier called L.A. Takedown; it had been a long time since I last watched it so I thought I would revisit it.

L.A. Takedown is practically the same film but made for TV and was meant to be a pilot for a potential television series which never materialized.

It’s not as violent as Heat and doesn’t have much swearing but it still feels gritty and Michael Mann’s style is apparent even if it lacks the visual pizazz of Heat.

This movie is only 90 minutes long so it’s fast paced and far shorter than Heat which is fine, but you do lose some of the characterization and dramatic moments.

Admittedly I’ve always felt that Heat had a bit too much going on where subplots featuring Natalie Portman’s character or Dennis Haysbert felt superfluous to the story. You could have removed them, and the movie wouldn’t have lost anything.

L.A. Takedown doesn’t quite have the same acting talent involved but we do see some familiar faces; Xander Berkeley plays Waingro in this movie and although I prefer Kevin Gage, Berkeley did a fine job as the unstable criminal who can’t be trusted. Berkeley of course would show up again in Heat in a smaller role as Ralph. Michael Rooker also has a role as Bosko and Predator’s Richard Chaves plays Det. Lou Casals.

Our leads are Scott Plank (who sadly passed away at age 43 in 2002) as Sgt. Vincent Hanna (the Al Pacino character in Heat) and Alex McArthur as Patrick McLaren (Robert De Niro’s character in Heat who was renamed to Neil McCauley). Both actors make the characters their own here but they lack the sheer presence and charisma of De Niro and Pacino.

The iconic coffee shop scene is here and mostly the same but it’s still strange seeing two other actors saying those lines.

I feel that Heat was De Niro’s movie as he just acted Pacino off the screen while Al just spent the movie grandstanding and shouting. Scott Plank is more restrained as Hanna which is no bad thing; his wife doesn’t have an affair in this although she does get harassed by Flash Gordon himself Sam Jones.

Alex McArthur was ice cold as Patrick and I thought De Niro made the character of Neil more appealing (if still flawed) especially in his scenes with Eady; McArthur certainly comes across as more intense. You felt like there is this simmering rage underneath and he could blow at any second whereas De Niro was quiet and more calculating. Eady and Patrick’s story is much like it is in Heat with Neal and Eady where there is a desperation to their romance; they are both alone and where Patrick is used to it Eady is lonely and needing to be loved.

Tim Truman provides the score and Miami Vice fans will remember his music from season 5; this is very similar with cool electric guitars and drums working perfectly with this story. I wish I could get the score to this movie as it really is fantastic.

Like Heat there is some unnatural sounding dialogue with characters saying things that people just don’t say in regular conversation; I know it’s a movie but it sometimes makes me laugh unintentionally at how portentous some of the lines are.

In terms of action we still get the opening heist and the climactic shootout; it may not be as good as Heat but it’s still impressive considering the film was shot in 2 weeks. We also get a quick scene of Hanna beating up Jimmy (Sam Jones) as I mentioned above where he’s harassing his wife.

Overall, L.A. Takedown may lack the budget, cast and style of Heat but it’s far from terrible and it’s amazing just how similar they are as movies. It could be argued this is tighter in terms of pacing and the action is still well done so it’s worth seeing purely out of curiosity.