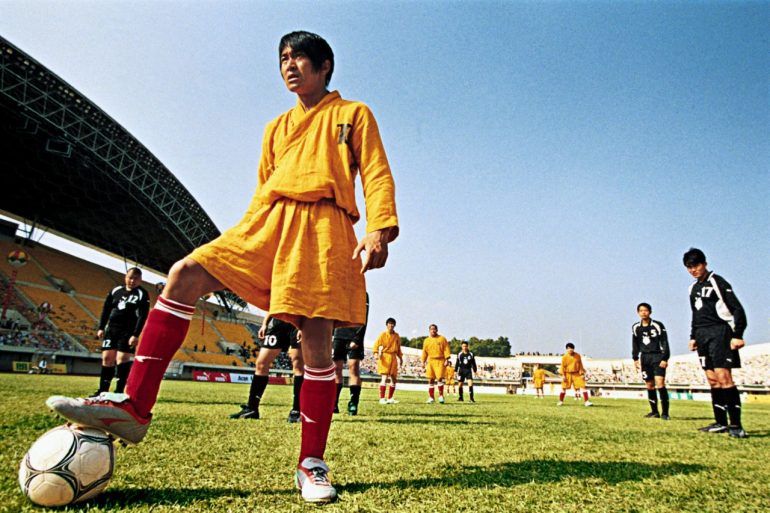 Best Soccer Movies of All Time

As the most popular sport across the planet, it’s no surprise to see that there is a huge diversity of movies about soccer.

This game has been shown in every possible way and if you are betting on sports you might recognize some of these stories, as they are either documentaries or real-life portraits of soccer tales.

So, what are some of the best soccer movies you shouldn’t miss?

This John Huston movie stands out because it mixes big-name actors like Sylvester Stallone and Max von Sydow with some of the most famous soccer players of the time. Pelé, Bobby Moore, and Osvaldo Ardiles are among the players who take part.

The story revolves around a group of Allied prisoners of war who are rounded up to play against their German guards in a high-profile exhibition match. The Germans see it as a great publicity stunt, but the prisoners are planning to escape as the game is played.

It’s not the most realistic sports movie ever made, but the action is exciting and there’s enough tension to keep you hooked until the very end. Prison movies featuring guards against prisoners are always popular in the sports world, from Mean Machine to the football-based The Longest Yard, and this is arguably the best of them.

This satirical look at the world of soccer features Ricky Tomlinson in the title role, as a foul-mouthed manager who is given the task of taking the England team to the World Cup. It’s done in a mockumentary style that pokes fun at many of the sport’s most famous figures and traditions as Bassett finds himself completely out of his depth.

The film was followed by a TV series about Mike Bassett, although attempts to make a second movie failed when the Kickstarter project didn’t raise enough money to get it underway. If you want to laugh at some soccer in-jokes this is a good choice, but don’t expect to see a lot of action on the field as most of the movie takes place behind the scenes.

Director Gurinder Chadha takes us into the world of the Indian Sikh community living in the UK, as Jesminder and Jules both go against their parent’s wishes to attempt to break into the world of female professional soccer. They need to go to great lengths to avoid their parents finding out about their dream of making it in the sport.

The title of this movie refers to the free kick technique perfected by David Beckham that was popular at the time, but the story is about a young woman’s attempt to find her place in the world. It received good reviews for its mixture of light-hearted action and more serious issues. Since then, it’s become a highly successful stage musical that ran in London for a year before going to North America.

We’re taken into the murky world of England’s soccer hooligans in this film, which features Elijah Wood as American student Matt, who has been expelled from Harvard. He moves to London and gets caught up in the battles between rival groups of fans.

The gripping story takes us through personal tragedies and old rivalries that bubble up to the surface as Matt gets caught up in the tribal fighting. A couple of sequels to Green Hooligans were released, but the original remains the best glimpse of this dark world of the soccer hooligans and proved to be extremely successful with audiences.

This unique look at the sport introduces us to Sing, who is a Shaolin kung fu master looking to bring the discipline to a wider audience. He joins forces with a former soccer player to turn a local team into a tight unit. The action on the field isn’t very believable but the story is interesting enough to keep you watching and urging on the Shaolin team.

Shaolin Soccer is presented in a comedy style that has the kung-fun team beating other opponents easily until they meet Team Evil in the cup final. It’s a fun film that doesn’t take itself too seriously and manages to help us get caught up in this unusual mixture of techniques.

This is a sports drama directed by Danny Cannon that stars Kuno Becker as Santiago Muñoz. He is a promising amateur soccer player who is living in Los Angeles as an undocumented migrant from Mexico. He gets the chance to travel to the UK for a professional football trial with Newcastle United.

It follows the trial and tribulations of Santiago as he struggles to adapt to the new conditions as well as dealing with his own personal issues. This movie was made with the participation of governing body FIFA and it was reported the sportswear giant Adidas pays $50 towards the production and marketing. It was well-received by movie-goers and has since gone on to become a cult classic.