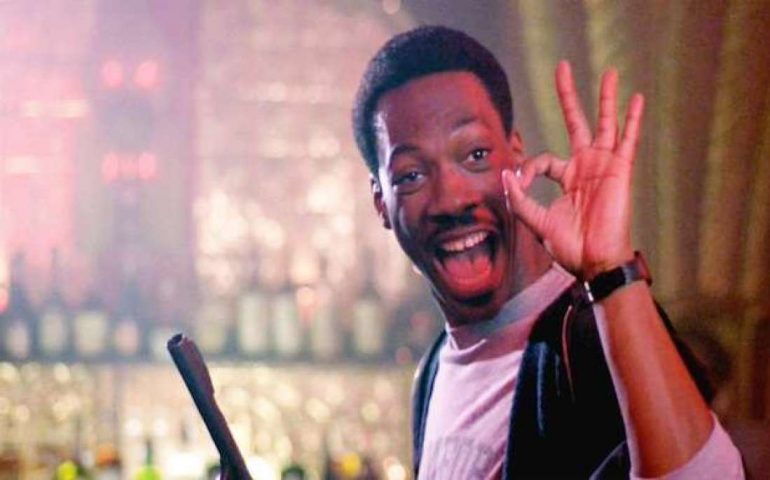 I prefer 48 Hrs. but if you want a fun action comedy then you’ll definitely enjoy Beverly Hills Cop.

Review: Eddie Murphy stars in this 80s classic and it’s one of his very best roles. Alex Foley is a one-liner spewing, smart ass and really is an icon of he 80s. His fashion sense and personality are unforgettable, but I do find that I need to be in the right mood to watch it otherwise I find it a bit annoying.

There is plenty of action and it does have one of the all-time greatest shouty police chiefs. You’ve also got the supporting cast of Judge Reinhold (Whatever happened to him anyway?), Ronny Cox and John Ashton; Cox actually plays a rare good guy and is really likable too.

Steven Berkoff plays the villain, just he he does in pretty much every single film he’s ever been in, but he’s just so damn good at it.

You of course also have THAT theme tune, Axel F by Harold Faltermeyer and despite sounding very 80s, it’s a great tune.

There are many laugh-out loud moments and the film rockets along at a good pace.

Interesting tidbit: Did you know Sylvester Stallone was originally up for the role of Foley? It could have been a very different role for him but in the end I think it went to the right man. Eddie Murphy WAS Foley and this will probably be remembered as his most famous role.

Overall, I prefer 48 Hrs. but if you want a fun action comedy then you’ll definitely enjoy Beverly Hills Cop.